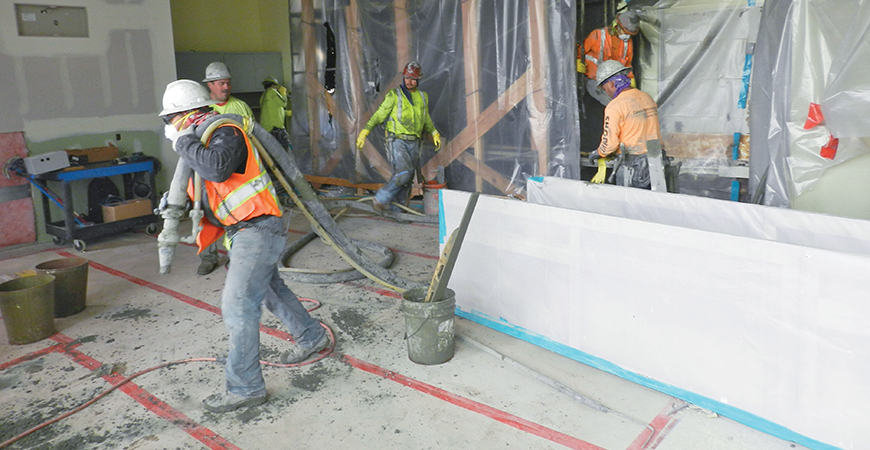 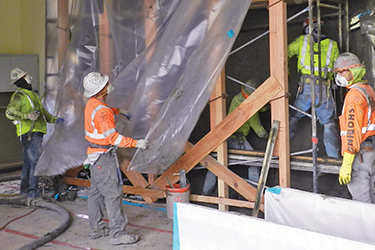 Building Trades workers take on the task of completing the $15.8 million project at Robert Louis Stevenson Elementary School in time for the 2017-2018 school year.

SFUSD Director of Construction for the bond program, Maureen Shelton, said work on the 2011 bond projects is winding down as the District ramps up for more work funded by the $744 million bond measure passed in November 2016. Many new projects have recently gone out to bid and will begin construction in 2017 and 2018.

The work is covered by the Project Labor Agreement between the Building Trades and School District that guarantees prevailing wages and union benefits. Shelton said the PLA has worked well and projects have been completed on schedule. Contractors have been able to meet the challenges of working intensively during the summer as well as around the school day schedule during the school year, while working towards local hire goals for construction crews. Organized Labor recently visited job sites at Robert Louis Stevenson and John Yehall Chin elementary schools.

Robert Louis Stevenson
Elementary School
In early July, crews of laborers and cement masons with Dees Hennessey completed pouring 200 yards of shotcrete for new shear walls that will rise from the basement to the roof of the 2-story building. Terry Campbell, Superintendent for General Contractor Arntz and a 27-year member of Carpenters Local 22, said 90 construction workers were on the project at its peak for the shotcrete pour and other work, with five weeks left to get the building ready for the 2017-18 school year. As crews from subcontractor Cell-Crete installed light weight concrete on the roof top, other crews worked inside modernizing the plumbing, mechanical and building utility systems.

Subcontractors for the $15.8 million project include Reyes Drywall, Cal Pacific Plumbing, JMA Construction for architectural woodwork, and Mike Brown Electric. Swinerton is the Construction Manager for the project. AHC Glass is the subcontractor for the glazier work. Campbell said all the old wood frame windows would be replaced with energy-efficient windows. SFUSD’s Project Manager for RL Stevenson, Dewitt Mark, said the school’s lighting would be converted to more energy efficient LED lights.

Mark said the PLA was working well for the project and contractors were in compliance with the PLA. Campbell said Arntz was exceeding its local hire obligation, with about 70 percent of its crew of carpenters and laborers residing in San Francisco. San Francisco-based contractors include Reyes Drywall, with a four-person crew completing interior finish work.

John Yehall Chin
Elementary School
Work on the modernization of John Yehall Chin Elementary School on Broadway in North Beach is wrapping up, with new classrooms ready to be set up in time for the start of the 2017-18 school year in August. In early July, one painter was putting finishing touches to the school’s exterior doorway as a small crew of electricians completed data and electrical connections inside.

Work began in April 2016 with demolition and abatement, and the gutting of the interior of the three-story building. The school was seismically upgraded to meet current earthquake codes with new shear walls through the three floors and steel brace frames, as well as new cement in-fill and braces for the brick exterior. Other modernization work included new fire alarm and data systems, new plumbing and electrical fixtures, new fire sprinklers and new ramps and rails to improve accessibility for students with disabilities and bring the building into compliance with the Americans with Disabilities Act.

Other projects
Other projects this summer include construction of new classrooms and modernization of Junipero Serra Elementary School, with E.S. Brett as the General Contractor on the $12 million project; modernization and a new administration building for Frank McCoppin Elementary; and seismic upgrades at Redding Elementary.

Future projects funded by Prop A (2016) will include completing seismic safety and modernization projects to make all schools and other district facilities more earthquake safe and energy efficient; building new schools and classrooms to accommodate a growing student population, and maintaining and expanding the district’s green schoolyards program to 91 school sites. Prop A will also help fund technology improvements such as higher-speed Wi-Fi for all classrooms, and development of a new SFUSD Arts Center and Ruth Asawa School of the Arts to preserve and promote music and arts curriculum. The District will also explore methods for developing affordable housing for teachers.