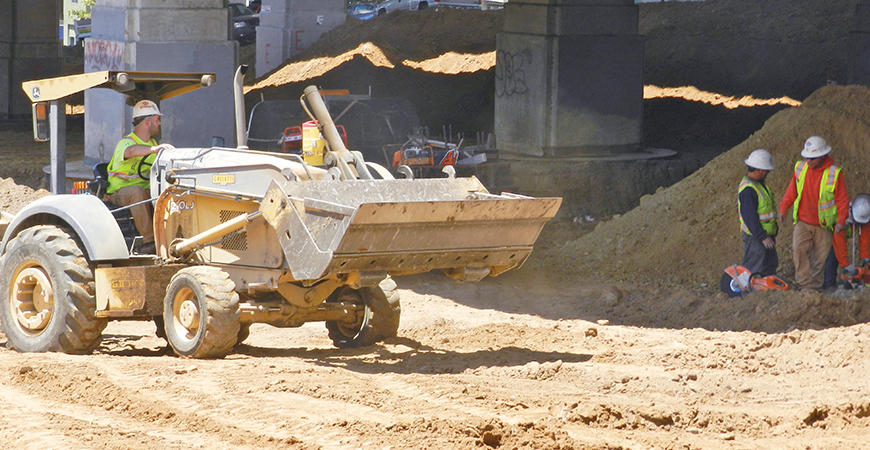 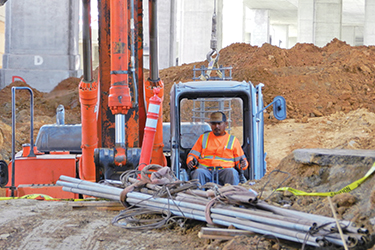 Once completed, the new Transbay Transit Center Bus Storage Facility will house 49 buses and will include a transit administration building.

When completed next July, the facility will have parking areas and weekday storage for 49 AC Transit buses, a modular AC Transit administrative building, a concrete masonry support building, pre-manufactured guard booth and sound walls around its perimeter. The busses will serve commuters from the East Bay to the new Transbay Transit Center currently under construction.

Ghilotti is a signatory contractor with the Carpenters, Operating Engineers, Laborers, Cement Masons and Teamsters unions, and uses only union subcontractors. Subcontractors include Malcolm Drilling, Hillside Drilling, Camblin Steel Services and Gerdau Steel for rebar. Contractor MCM is building the bus link ramp structure along Perry Street that will connect the Bus Storage Facility to the bus ramp serving the Transbay Transit Center.

Ghilotti’s Superintendent, John Perkins, said work started in May 2017 with demolition of the existing parking lot, excavation and removal of hazardous materials. Project Manager Matt McDonald said the site was mostly earthquake debris fill, with concrete and bricks, as well as lead. All hazardous waste was trucked to a certified waste facility. Work now consists mostly of dirt removal, with about 5,000 yards of dirt to be hauled away, and foundation construction. The piers for the columns that hold up I-80 above will also be reinforced.

The project is covered by a Project Labor Agreement between the Building Trades and the Transbay Joint Powers Authority (TJPA) and ensures payment of prevailing wages and union benefits. McDonald said the contractor was reaching out to Veterans’ groups to bring in Vets through the Building Trades’ Helmets to Hardhats program that is part of the PLA. He said the contractor would meet the 25 percent Small Business Enterprise goal of the PLA, with local contractors Phoenix Electric and Alta Engineering covering about $5.8 million of the $20 million overall construction contract.

Underground utility construction, site excavation and grading will continue through July Upcoming work will include stabilizing the soil and paving. The site will also have concrete masonry sound walls around the perimeter in addition to metal fencing and operable gates at designated access points.

Ghilotti will also construct a 1,500 square foot modular administration building for AC Transit and a concrete masonry support building measuring approximately 900 square feet. Utility work will include plumbing, fire sprinkler, gas, electrical, communication and sewer services for the buildings as well as site lighting, security and Closed Circuit TV systems. The new facility is located across from a similar facility used by Golden Gate Transit for daytime off-peak staging of its buses between Third and Fourth Streets at Stillman. The Golden Gate Transit site also features an administration building and support building where bus drivers can take breaks.

Perkins said falsework would go up in September or October for the bus bridge to the Transbay Center. The bus link ramp will consist of a pre-stressed concrete box girder spanning over Second Street, a cast-in-place reinforced concrete slab section, and retained earth roadway sections on each end, which connect the Bus Storage Facility to the bus ramp serving the Transbay Transit Center, according to a project description from the TJPA.