Work is in the Pipeline 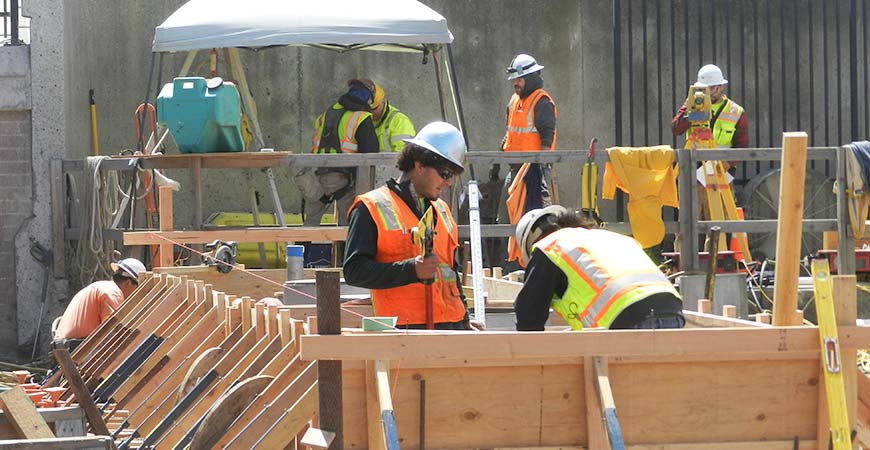 Major projects that are part of the San Francisco Public Utilities Commission's (SFPUC) Sewer System Improvement Program (SSIP) are set to break ground later this summer and fall. Planning and environmental reviews of those projects covered by a Project Labor Agreement with the San Francisco Building and Construction Trades Council are underway, as work on other projects begun before the PLA was signed are nearing completion – with some of the same contractors, workers, and hiring policies that are part of the SFPUC's Water System Improvement Program (WSIP) PLA. The PLA for the SSIP work is an extension to the WSIP PLA signed in 2007.

The WSIP made upgrades to the pipelines, reservoirs, dams and pump stations that deliver and store water from the Hetch-Hetchy reservoir to the Bay Area. The SSIP is a multi-billion dollar, 20-year capital investment that will build a healthier, more reliable and seismically-resilient sewer system. Work includes sewer line and pump station upgrades, developing sustainable methods to manage storm water and modernization and seismic upgrades to waste water treatment facilities.

"In our city, we have a clear policy and vision when it comes to providing opportunities to career pathways, making sure that local folks have a chance to learn and advance to good union jobs."

Western Water is the General Contractor for the project that involves tunneling and shoring, installing new pumps and underground pipes, and construction of a new building for electrical control systems. Western Water's Job Superintendent George Lucero said the project requires workers who have specialized training for working in confined spaces and handling potentially hazardous materials. Lucero said contractors and unions are working together with CityBuild to train new workers to be ready for the specific challenges of the job. Lucero said new apprentices need to have a good attitude and work ethic.

"We have been very lucky to get good workers through CityBuild," he said. The contractor has its own core crew of carpenters, laborers and pipefitters along with union hall hires. Work began in May 2016 and is expected to be completed in another year.

Western Water was also the contractor for SFPUC's upgrade of the pump station at Lake Merced, and became a union signatory contractor during that project. The contractor had a positive experience working through San Francisco unions' hiring halls and with union subcontractors.

Lucero said Laborers Local 261 member Roderick Cudjo was hired for the Southeast Treatment Facility project after he had worked on the Lake Merced project. Cudjo said the training and experience he gained at the WSIP project "works perfectly" for the SSIP job, where he works for subcontractor Fontenoy Engineering. He learned about pump control valves, using specialized tools, and working with operating engineers. He appreciates the patience the company has in training new workers on the job. Lucero said Western Water "has always been grassroots, and we try to instill team training – all the journeymen help give the right training" in how to be efficient and safe on the job. He added that he appreciates working with the Laborers union to develop more specific training.

Alfonza Merritt, an apprentice with Laborers Local 261 working for Fontenoy Engineering, said the training he received through CityBuild's 18-week program has been instrumental in being able to start a career in construction. He said he learned a lot about different trades – from sheet metal worker and carpenter to cement mason and ironworker – and chose to be a laborer because of the variety of tasks and skills.

"I love it," Merritt said. "I have steady work. I am always telling people in my neighborhood to go to CityBuild and the Mission Hiring Hall. In construction you can make a decent wage and support your family."

Many CityBuild graduates are now working on other nearby projects like Lennar's Shipyard development, as well as downtown San Francisco.

Chris Colwick, SFPUC Communications Manager, said the next two major projects – the new Biosolids Digester Facilities and the replacement of the Headworks (where the flow of untreated wastewater enters the plant) at the Southeast Treatment Plant – will bring in many contractors over the next 20 years. The facility near Third and Evans streets in the Bayview District treats 57 million gallons of wastewater per day and up to 250 million gallons per day during rain storms. Work will also include substantial upgrades to wastewater treatment tanks, structural and seismic retrofits, new oxygen plant and influent pumps, odor control improvements and architectural and landscape improvements.

Colwick said the SFPUC checks trends in the construction workforce in order to "make sure we have the capacity" to fill jobs.

Western Water's Lucero said the contractor works all over the state and San Francisco is the only place where workforce development like the SFPUC's is happening.

"Getting people into apprenticeships is vital so when workers retire, we have new workers to replace them," he said.

The Contractors Assistance Center provides technical assistance and services to local community contractors so that they can meaningfully participate on SSIP and other SFPUC projects. The SFPUC is actively engaging awarded contractors to identify the opportunities for local firms to maximize their participation and increase their technical skills and contracting capacity.

SFPUC Workforce and Economic Program Services Director Masood Ordikhani said the ongoing collaboration between the building trades unions, contractors and community based organizations to train workers is successful, and could be a model for other San Francisco projects. Advocating for extending the WSIP PLA to the SSIP work last year, Ordikhani noted that $450 million in wages had been paid for the WSIP work, with half of the 12,000 workers residents of SFPUC's service area, and 70 percent of apprentice hours worked by SFPUC service area residents.

Part of the SFPUC's strategy is to expand opportunities to all residents of San Francisco, especially women and other under represented groups of workers who have had to bear a disproportionate impact of SFPUC operations. Nyzeina Eberhart, an industrial painter with IUPAT Local 913, is working for subcontractor F.D. Thomas painting tanks and applying special coatings to pipes. The Western Addition resident said she came to the union through CityBuild. Eberhart was also part of an all-woman cohort of pre-apprentices from around the Bay Area who received part of their training at Berkeley's Rising Sun pre-apprenticeship program. She said she is now involved with helping more women get into the trades, and has aspirations to move up the career ladder herself.

Ordikhani said the women's cohort and Tuolumne Collaborative are a model through which the San Joaquin County Office of Education and SFPUC worked with the Trades to develop a collaborative with service and education providers, contractors, community and civic leaders to develop a pre-apprentice training targeted at providing local community residents, with a particular focus on women's participation, with career opportunities in the construction industry.

"This successful model is an example of the types of dynamic initiatives that can be localized and customized for the unique characteristics of San Franciisco's community," Ordikhani said. "Residents can fully participate in similar partnerships between SFPUC and the Trades that train our local workers for careers with the Building and Construction Trades – gaining the unique skills needed for SSIP's construction projects."

The SFPUC in May congratulated the Women Cohort Graduates and commended the San Joaquin County Office of Education, the Building and Construction Trades Council, the Tuolumne County Collaborative, and SFPUC staff with a Congratulatory Resolution for developing a training for regional residents – with an emphasis on women – for careers in the construction industry.

"In our city, we have a clear policy and vision when it comes to providing opportunities to career pathways, making sure that local folks have a chance to learn and advance to good union jobs," SFPUC Commissioner and Laborers Local 261 Political Director Vince Courtney said. "We're honored that they are here."

The first phase of SSIP features 70 projects; to-date, six have been completed, 10 are currently in construction and many more are in the pipeline.