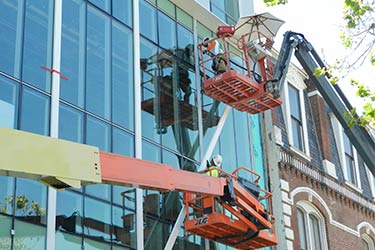 The Commonwealth Club’s new home at 110 The Embarcadero is nearing completion. - Photo By Paul Burton

Construction is nearing completion on the new home for the Commonwealth Club on San Francisco's historic waterfront at 110 The Embarcadero. The Commonwealth Club has served as a forum for speakers – including political leaders, scientists, activists, economists, writers, and business leaders – for 125 years, but has not had its own building.

The project was approved in 2014, but construction was delayed for more than a year because of appeals by a few locals who objected to changing the historic building's façade. Commonwealth Club Chief Executive Officer Gloria Duffy said at the time the project was approved that the glass façade would allow for operable windows and a more sustainable building. The building's façade on Steuart Street will be restored to how it was in the 1930s to blend in with adjacent early 20th Century buildings.

The Commonwealth Club won approval and key support from the International Longshore and Warehouse Union, after promising to restore the building that served as headquarters for the 1934 General Strike led by Longshore workers. Earlier plans to develop the site were abandoned by developer Hines in 2010 after meeting opposition from the ILWU, labor historians and some nearby residents. The Commonwealth Club pledged to work with the ILWU and other unions to create historic displays and digital presentations commemorating the strike and its aftermath that led to the shooting deaths of two strikers on Bloody Thursday. The San Francisco Building and Construction Trades Council also backed the project as it went through the approval process.

Seats in the main auditorium

The new headquarters situated between the Audiffred Building and the Jewish Community Federation will have 24,000 square feet across three floors – adding a third floor to the original 2-story structure. It features a 299-seat auditorium and smaller 135-seat auditorium, and a rooftop terrace. The project is designed by Gensler Architects and Leddy Maytum Stacy Architects, and is seeking LEED Gold or Platinum certification for energy efficiency. The two new auditoriums will feature acoustical wood paneling reclaimed from the historic joists and columns of the original building.

Construction began in September 2015 with clearing out and dewatering of the basement, stripping off the façade on the Embarcadero side, and bracing the Steuart Street façade.

Oliver & Company, a carpenters union signatory contractor based in Richmond, is the general contractor for the project. Other contractors on the all-union project include McMillan Electric, Concord Iron Works, and USGA, Inc. for glazing and architectural metal work. Oliver & Company has extensive experience building performing arts spaces, including the California College of the Arts, Berkeley Repertory Theatre, East Bay Center for the Performing Arts and Aurora Theatre.

Hoodline reported that "The Commonwealth Club plans to continue its annual schedule of over 450 speeches, debates and discussions addressing key issues in society, culture, politics, the economy and more. At least a million people hear the club's weekly radio broadcasts on more than 230 public and commercial stations across the country."

"This will truly be what we're calling a home for ideas, and the agora for San Francisco and the Bay Area that our founders envisioned," Commonwealth Club CEO Gloria Duffy told Hoodline.