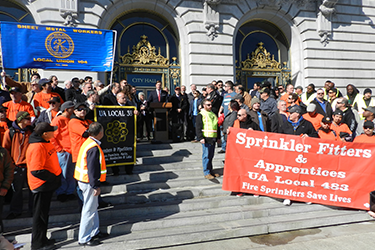 Proposal Would Cover Public Work or Improvement Projects over $1 Million

The ordinance will be assigned to a committee 30 days following its introduction. If passed, it would require that no later than Sept. 1, 2017, the City Administrator negotiate with the relevant trade councils, craft and labor unions, and sign a PLA on behalf of the city.

There is no existing legal requirement for the city to use a PLA on its public work and improvement projects. Currently, city departments negotiate PLAs for certain large public work projects on a case-by-case basis, when the department determines that a PLA will protect the city’s proprietary and fiscal interests, according to a Legislative Digest from Supervisor Farrell’s office. The PLA would cover construction and remodeling of city buildings including fire and police stations, libraries, hospitals and other infrastructure. It allows the San Francisco Municipal Transit Agency to separately negotiate and enter into a PLA that applies to covered projects within its jurisdiction.

At a City Hall rally before a Board meeting, Supervisor Farrell acknowledged the work done by Building Trades Council leaders over the past two years to craft a citywide PLA.

“Labor has built our city and I believe it’s time we provided another opportunity in San Francisco for good jobs, good wages, good benefits and highly skilled labor for brothers and sisters that helped build and run the city of San Francisco,” Farrell said. “San Francisco is a strong labor town. I will stand with organized labor every day of the week to give working families a fighting chance to stay in San Francisco. We need project labor agreements in place on public works projects to increase local employment and decrease public works disruptions.

“Working men and women are under attack,” Supervisor Farrell continued. “Every Republican President since Reagan has sought to expressly prohibit project labor agreements. With Trump now in the White House, I believe we must do everything in our power locally to stand up for workers in San Francisco. My policy does just that.”

Farrell said the purpose of the citywide PLA under the proposed ordinance is to avoid costly delays and additional expenses associated with public works and improvement projects that involve numerous contractors and employees in different trades, have critical timelines for completion, and require a skilled and properly-trained workforce to successfully complete the work in a timely manner.

The citywide PLA will be binding on all contractors and subcontractors participating on a qualified public works project. All contractors and subcontractors would be required to hire apprentices from state-approved apprenticeship programs, and use the city’s Helmets to Hardhats program to assist veterans in obtaining employment. They must also adhere to San Francisco’s local hiring, prevailing wage and local business enterprise requirements. Unions would agree to refrain from strikes, picketing, and other labor disruptions on qualified public works projects.

“We sacrifice the right to take job action,” San Francisco Building and Construction Trades Council Secretary Treasurer Michael Theriault said. “That’s not something we sacrifice lightly, but, while unions are reluctant to sacrifice the right to strike, a citywide PLA policy will ensure better protections for workers, better opportunities for local residents, and work of enduring quality for the city. It guarantees union wages and benefits, and is open to non-union contractors who agree to pay prevailing wages. Workers, whether union or non union, will be assured of good wages, will be assured of better protections, better representations, will be assured of benefits that many of them have never had or had access to.”

Theriault said he was glad to see the city move forward on a PLA in his 12th year as leader of the Council, noting that his predecessors had pushed for a citywide PLA for many years. He said organized labor is under assault across the country, and a PLA would help build a fortress in San Francisco to protect workers.

Other speakers at the rally included four of the co-sponsors of the PLA ordinance: Jeff Sheehy, Ahsha Safai, Hillary Ronen, and Norman Yee. Sandra Fewer and Malia Cohen are also co-sponsors.