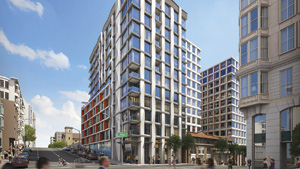 A proposed residential development at Pine Street and Van Ness Ave. will preserve some of the historic elements of the site.

San Francisco is one step closer to realizing a new pair of residential buildings on the historic 1600 block of Pine Street.

The San Francisco Planning Commission certified the final Environmental Impact Report at its May 15 meeting for a proposed residential development at Pine Street and Van Ness Ave. Oyster Development and Tricon Capital Group bought the long-vacant properties at 1634-1690 Pine Street in November 2011, and plan to build two 13-story buildings with 262 residential units and 5,600 square feet of retail space.

The San Francisco Business Times reported in 2011 that AF Evans had attempted to build 283 units on this site before a 2009 bankruptcy. Oyster Development had to restart the entitlement process and spent the last two years refining the project, leading to the certification of the EIR. Representatives from Oyster development did not respond to inquiries about the schedule for starting construction or the selection of a general contractor. Build Group worked on the pre-construction planning and is the general contractor for Oyster Development’s jobs at 1800 Van Ness and the 2558 Mission , which both received funding from the IBEW-NECA Diversified Underwritten Real Estate Fund. The INDURE funding requires union trades workers on its projects. The 1634 Pine Street project will be the third project that Oyster Development is building using INDURE funds, according to IBEW Local 6 Business Agent Mike McKenna. Cupertino Electric will be the electrical contractor.

The six parcels that make up the property at 1634-1690 Pine total 35,000 square feet and include five vacant buildings and a parking lot. Much of the discussion and public comment at the Planning Commission’s meeting to certify the EIR related to the historic preservation of the buildings. Most of the buildings would be demolished, but three of the existing building façades would be restored and incorporated into the proposed project, designed by architects Kwan Henmi. An alternative proposal would have kept the façades of all five buildings. Several historic preservation advocates spoke against the project. They noted that the Pine Street buildings to be demolished are part of the Pine Street Auto Shops Historic District and adjacent to the Van Ness Auto Row, described as one of the most influential automobile industry centers on the West Coast during the 1910s and 1920s.

The set of connected buildings also includes the former Deovlet and Sons furniture store. Roberta Wackler, a daughter of former owner Robert Deovlet, spoke in support of the project. She commented that the developer and architects had “preserved the spirit and beauty of the old brick buildings,” and preserved the “history of my family’s lineage and history of San Francisco.” That history includes support for Japanese-American neighbors who were sent to internment camps during World War II. In 1942 the Deovlet family stored the personal belongings of Japanese-American families at their 1660 Pine Street location in locked compartments on the third floor of the building. After the war, all of the items were safely returned to their owners.