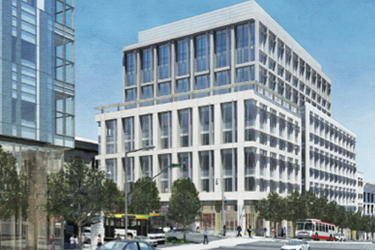 The new medical office building at Van Ness and Geary is expected to open in 2018. – RENDERING COURTESY PANKOW

Structure to be Part of Greater CPMC Campus

Work on the CPMC/Sutter Van Ness Medi- cal Office Build- ing (MOB) at Van Ness Ave. and Geary St. is progressing as crews of ironworkers are tying the rebar columns at street level and the project moves to the next phase when steel will be erected that connects to the concrete columns of the below grade garage. Small crews of carpenters, laborers, and operating engineers are on the job, continuing to pour decks and shotcrete, moving up through the lower garage level until March. Waterproof- ing the subgrade exterior walls continues through February. In April, crews will begin erect- ing the remainder of the steel for the structure. Work on the nine-story, 250,000 square foot medical office building started in June 2015; the project is on schedule for completion in 2018.

The MOB is part of an overall development plan that includes the new 700,000 square foot acute care hospital – the California Pacific Medical Cen- ter (CPMC) campus at Van Ness and Geary currently under construction. The MOB will be connected to Sutter’s new hospital via a pedestrian tunnel below Van Ness. The MOB will also include a six-level, 383-space subter- ranean parking structure that will serve both the MOB and the hospital.

The project’s developer, Pacific Medical Buildings, is a healthcare real estate developer based in San Diego that builds and manages medical office buildings, clinics, academic medical facilities and parking structures. According to PMB, the architect for the project, Boulder Associates, is a leader and innovator in sustainable healthcare design. The hospital and medical office will be LEED Gold certified through use of sustainable design and construction practices. According to CPMC, the hospital will incorporate a 100 percent filtered outside air system, healthy building materials and water conservation.

Stories of a new Medical Building at Van Ness & Geary

Square footage of the new structure

Parking spots in the 6-level garage

Pankow is the general contractor for the project. Union subcontractors include Ryan Engineering, Alamillo Rebar, Southland Industries (HVAC and plumbing), Lawson Roofing (waterproofing) and Rosendin Electric. Pankow also is a concrete contractor for the hospital construction.

According to Pankow, the project is one of the first to meet the high standards of the Office of Statewide Health Planning and Development to use “a Lean Construction delivery process to create a truly collaborative team approach.” That involved using 3-D building information modeling programs to coordinate the design and construction phases.

When completed in 2019, the Van Ness and Geary Campus will consist of a modern acute care hospital with 274 patient beds and the medical office building across Van Ness. HerreroBOLDT is the general contractor for the 12-story hospital. It will have 740,000 square feet of diagnostic, treatment, and inpatient bed space and departments for women’s health, children’s health, cardiology, oncology, emergency care and organ transplants. The 253,000 square-foot, nine-story medical office building will accommodate outpatient services and the health care professionals at the CPMC hospital.