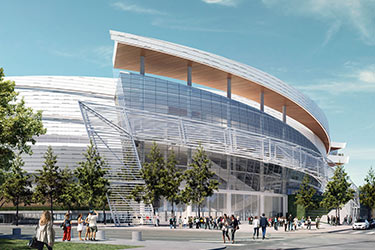 After overcoming its most recent legal challenge, the new Warriors Arena – to be known as the Chase Center – was set to break ground in January. - Image Courtesy Golden State Warriors

After battling (and winning) several legal challenges along the way, the Golden State Warriors are at long last ready to break ground on their new arena. The Warriors' environmental impact report held up in court at the end of November and has allowed them to move forward with construction. The groundbreaking is set for Jan. 17 in the Mission Bay neighborhood of San Francisco.

The new building, named the Chase Center, will not only become an iconic structure in the Bay Area, but it will support the Building Trades and working families along the way, in spite of the last-gasp efforts of one opposing group. The Mission Bay Alliance has been challenging the new arena for at least a year now and has lost every step of the way. Their latest dispute took the Warriors EIR to a California court of appeals where the court ruled in favor of the Warriors.

"We're really excited. This is the most important milestone in a several year long public planning process," said Warriors spokesman P.J. Johnston. "We're very proud of the fact that we have a project that was unanimously approved by every regulatory agency, board and commission – including the Board of Supervisors – which rarely votes unanimously on anything, much less a once-in-a-lifetime project like this. We're very proud of our record on this project to date, but now the real work begins and it's exciting."

The work is guaranteed to be beneficial to the local trades with agreements in place with organized labor.

"Organized labor has been a strong advocate and partner in this process to date and will continue to be," Johnston said. "We've got local hiring goals and we're going to be announcing in the coming weeks some more programs to work with organized labor and local training programs to bring in new local workers. So it's an exciting time from the perspective of working people in the Bay Area."

San Francisco Public Utilities Commissioner and LiUNA! Local 261 Recording Secretary Vince Courtney said he's highly appreciative of the way the Warriors have gone about putting this project together, especially with regard to the local hire aspects.

"One of the things that impresses us the most is that the developer and the team are really cognizant of how valuable the community workforce and community benefits piece is to the trades unions," said Courtney. "Providing those career pathway opportunities to the future membership of our affiliated local unions is something that we highly value, and we're excited about the fact that we didn't really have to educate the team or the developer about the value that has, not just to us, but to the city as a whole. We haven't had anything like this since AT&T Park."

The Warriors are the developer on the project working alongside a joint venture between M.A. Mortenson and Clark Construction for the general contracting. Johnston said the Warriors have already held some open houses with potential subcontractors and teams available for work. More opportunities and contracts with good paying jobs will come around over the next few years.

The project has come a long way since it was originally proposed for Piers 30-32. The designs have gone through several refinements along with the location change, and the public approval process has been extensive. With the exception of the aforementioned Alliance, everyone has thrown their full support behind the arena, including the Mission Bay neighborhood and business community. The location is also transit rich, with an expanded subway line expected to open around the time of the arena opening.

The Chase Center will seat 18,000 fans when all is said and done, with a 35,000 square-foot public plaza, waterfront park, surrounding offices, restaurants and cafes on 11 acres.

The anticipated first season for the basketball team at the new building will be the 2019-2020 season.