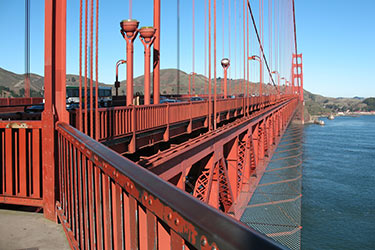 The Golden Gate Bridge, Highway and Transportation District approved a contract for installation of a stainless steel net below the bridge to prevent more bridge suicides. The District began a preliminary engineering and environmental review for the Golden Gate Bridge Physical Suicide Deterrent System in 2006, and in June 2014, approved spending to install steel-mesh nets under the span to prevent suicide jumps. The project includes a stainless steel net that will be installed 20 feet below the sidewalk and extending out another 20 feet.

After the District readjusted the initial $76 million for the project, Oakland-based contractor Shimmick Construction won the contract to do the work with a bid of $142 million. Shimmick has experience on heavy construction and bridge projects including the Dumbarton Bridge Seismic Retrofit Project in San Mateo County and the Gerald Desmond Bridge Replacement in Long Beach.

Construction is set to begin in 2017 and is expected to be completed by 2021.

Bridge District officials are looking at sources of revenue to cover the cost of the bid that is nearly double the amount approved in 2014. The San Francisco Chronicle reported, "The bridge district has already committed $20 million of its own money to the project. But getting more out of tolls would be tough, given that the agency is facing a projected $50 million projected deficit over the next five years. The state isn't doing much better. The California Transportation Commission just cut $1 billion from transportation funding on projects all across the state."

The project will get some federal funding through the "MAP-21-Moving Ahead for Progress in the 21st Century" program signed by President Obama in 2012 that makes nets on bridges eligible for federal funding. Whether those funds will remain available after Obama leaves office is yet to be determined.

Number of suicide deaths at the bridge, in 80 years.

A report on the Bridge Rail Foundation website noted that there have been 1,600 suicides from the Golden Gate Bridge in its near 80 year history, and that a "safety net on the Golden Gate Bridge will stop the jumping there and save lives. These are related both to the design of the net, the nature of suicide at the Bridge, and the nature of suicide in general." The Foundation addressed critics of installing a net, pointing out that, "nationally, 90 percent of all people who survive a first suicide attempt do not subsequently die by suicide. Given time and treatment, a person in a suicidal state can get past the impulse to die, and get on with life. And that's exactly what has happened with people who survived an attempt at the Gate."

According to the Bridge Rail Foundation, "every example of restricting easy access to lethal means is associated with saving lives," and that, "The Swiss system, on which the Golden Gate Bridge proposal is based, has stopped suicide jumps so effectively that no one has even tried the system. The Golden Gate Bridge net – like the system in Bern – will hang some 20 feet below the pedestrian deck. A jumper would fall two stories before hitting the net, likely causing some serious injury. And the natural sag of the net – with an injured individual in it – will make climbing out very difficult. In addition, the plan includes a rescue service to pull any injured individual from the net. The available evidence tells us the net will work."

Criteria for the project include being designed to impede the ability of an individual to jump off the Golden Gate Bridge, be able to be maintained as a routine part of the District's on-going Bridge maintenance program, and allow access to the underside of the Bridge for emergency response and maintenance activities.

The Bridge District has also developed other measures that successfully deter a significant number of people from committing suicide from the Bridge. These include installation of 11 emergency/crisis counseling telephones located on the sidewalks. The Bridge District also trains patrol officers, painters and ironworkers how to spot, engage and restrain suicidal people on the bridge, and offers a support program for anyone affected by the suicides.