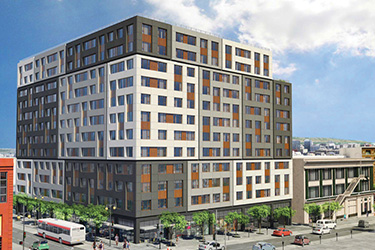 Located at the intersection of Golden Gate Avenue, Jones Street and Market Street, construction of 1066 Market Street is scheduled to start in late 2016 and should be completed by the end of 2018.

The San Francisco Planning Commission approved Shorenstein’s 12-story, 300-unit residential project at 1066 Market Street after the developer reached an agreement with the city to purchase the now closed post office at 101 Hyde Street and convey it to the city.

The Planning Commission had originally approved the project in March, but affordable housing advocates and Tenderloin neighborhood groups appealed the decision because the project did not include enough affordable units. Under the deal approved by the Board of Supervisors, the 101 Hyde property will become an 85-unit affordable housing development. The Planning Commission’s vote waives the Inclusionary Affordable Housing requirements for the 1066 Market Street project.

“1066 Market and 101 Hyde are the bookends of the Tenderloin, and the dedication of 101 Hyde to the city ensures both properties can now move ahead,” said Meg Spriggs, managing director of Shorenstein’s multifamily investments group, in a statement. “We are very pleased with the consensus solution, which will nearly triple the amount of affordable housing provided by the development of 1066 Market. Those 85-plus units will now be available at permanently lower levels of affordability.”

“We heard from Tenderloin residents that they can’t afford the rents under the city’s inclusionary program,” TNDC’s CEO Donald Falk said.

The median annual income for Tenderloin residents is approximately $23,000, according to the TNDC, so even the 36 below-market rate units originally part of the project would not have been affordable to most Tenderloin neighborhood residents.

“Shorenstein worked with us to come up with a creative alternative that will generate more housing at deeper levels of affordability,” Falk said. “It’s a great outcome for everyone.”

Located at the intersection of Golden Gate Avenue, Jones Street and Market Street, 1066 Market Street is designed by architectural firm Arquitectonica to maintain continuity with the architectural elements of the surrounding buildings. The building replaces a vacant commercial building and parking lot currently at the site. The 12-story building will also include approximately 5,000 square feet of retail space on the ground floor.

Shorenstein has a good reputation for using union labor and union contractors on its office projects. The developer could not be reached for comment on the choice of a general contractor on what will be its first residential project in San Francisco. Construction is scheduled to start later in 2016 and be completed by the end of 2018.