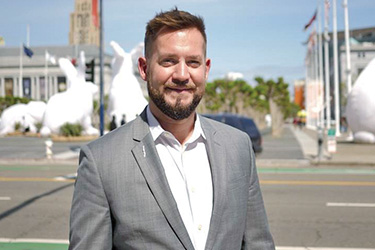 Mayor Ed Lee has named IBEW Local 6 Business Development Director Joel Koppel to the San Francisco Planning Commission, filling one of two vacancies. As Organized Labor went to press, Koppel had received approval from the Rules Committee, but still needed to go before the full Board of Supervisors for final approval.

Koppel will occupy one of seven seats on the commission and will be involved in examining the usage of proposed projects in San Francisco and garnering input from various groups involved in the possible development.

“What’s important for a commissioner to do is make sure that all sides have sat at the table together and kind of worked out a deal that will work for all people involved,” said Koppel. Koppel said that includes neighborhood residents, merchants, construction contractors and the labor force that will be used to build the project.

Koppel brings a wealth of experience in a variety of settings that will make him a strong leader in the position. He attended high school and college in San Francisco and was accepted into the Local 6 inside wireman’s apprenticeship program in 2000. He became a journeyman in 2005 and worked as a foreman running various commercial jobs downtown including hotel fire alarm upgrades and hospital life safety upgrades. He also worked in a contractor’s office where he said he “learned a lot about what happens upstream” and has recently been working at the business development position of a labor management cooperation committee in San Francisco formed by IBEW Local 6 and the San Francisco Electrical Contractors Association.

“I have known Joel for almost ten years, and worked with him for over four,” said IBEW Local 6 Business Manager John Doherty. “Joel has a very strong work ethic. San Francisco is going to get a great commissioner that will work hard to make sure that as the city grows and changes, it does so in a smart and sustainable way. We also see the problems that come from poorly planned development, and it is that insight that will be beneficial to the City of San Francisco.”

Koppel is aware of the necessity for objectivity on the Planning Commission, but notes his experience with the trades will be invaluable.