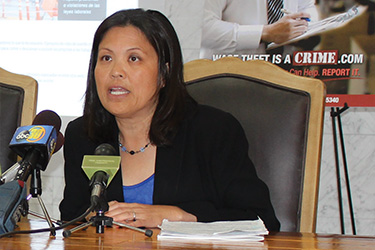 Labor Commissioner Julie Su has made combating wage theft a priority during her time in office.

When Labor Commissioner Julie Su was first considered for the role back in 2011, she was hesitant at first, content in doing good work as the Litigation Director at the nonprofit Asian Pacific American Legal Center while living in the Los Angeles area. But she soon realized the difference she could make, and Governor Brown appointed her to head California’s Division of Labor Standards Enforcement shortly after retaking office. Su assumed the position of Labor Commissioner in April, 2011, and now oversees more than 400 staff in 19 offices across the state.

A graduate of Stanford University (B.A.) and Harvard Law School, Su is a MacArthur Foundation “Genius” Award recipient who has dedicated her career to seeking justice for the underrepresented and underserved. She took some time out of her busy day to talk with Organized Labor about wage theft, protecting workers’ rights and inspiring her two daughters.

What are the duties of the Labor Commissioner?

Julie Su: Broadly it’s to promote the health and vitality of our state’s economy by protecting working people and providing a level playing field for honest employers. Specifically, we we get about 35,000 individual wage claims filed a year for workers who claim they were not paid their proper wages or other labor laws were broken in the workplace. We also conduct inspections at work places where we enforce prevailing wage rates and apprenticeship standards in public works projects. We investigate retaliation complaints and educate the public on labor laws. Those are my primary duties.

That’s quite a bit. Is there anything that you have focused on?

JS: When I was given the opportunity by Governor Brown to serve as the Labor Commissioner, my primary focus was to make the promise of a just day’s pay for a hard day’s work a reality in every workplace in California. What that translated into was the fight to combat wage theft. There was a tremendous amount of change that had to be made internally in order to make that happen.

What are some of the biggest challenges you’ve faced?

JS: It’s one thing to bring a strong vision to an organization or agency or to government. It’s another thing entirely to translate that vision into concrete changes, improvements to make the agency work better. That has definitely been one of my primary focuses.

One of the challenges, in the past, we had a random approach to inspections. It was quantity over quality. I don’t think large numbers of inspections are effective at all. So we focused on more intelligence gathering. We developed these strong partnerships with folks on the ground, which includes unions. The building trades have been one of our strongest partners, before I came but definitely in the last five years since I came into office.

Also to move away from easy-to-uncover violations that do little to curb underground economy problems, to move away from just looking for failure to register, or paystub violations. Not that those aren’t important, but those are often indicators of wage theft, and we’ve dug in deep to do the kind of in-depth investigations. It’s those kinds of things that have have shifted our internal focus.

Out of that, we have increased our citation rate, meaning the number of inspections that lead to citations increased dramatically. In the decade prior to Governor Brown coming into office, the citation rate was roughly about 40 percent. Only four inspections out of 10 resulted in a citation. In that last five years we’ve steadily and dramatically increased that so it’s been over 80 percent. In the last year it’s been over 90 percent. We’re very proud of that. I think that’s a sign that we have changed the focus.

I think the longer a worker has to wait, that’s a sign that we’re not doing our job. Part of being more effective is completing cases quicker but also do them more in-depth and do them more thoroughly.

One of the big changes is I started a criminal investigation unit comprised of sworn peace officers with the power to conduct criminal investigations and arrest those who violate the state penal code and labor laws, and we’re working with district attorneys across the state to be clear that wage theft is not only a civil violation of the law, it is also a criminal activity. We now have dozens of felony cases filed by district attorneys across the state working with us. We’re not going to tolerate stealing wages from workers.

We can fight for 15 all we want, but if wage theft is happening, it’s not going to have the impact that we want.

JS: Exactly. That’s why enforcement is so important. Policy is obviously important, and Fight for 15 is obviously critical, and the unbelievably important prevailing wage laws that we have, but if we don’t have enforcement, the policies become meaningless.

There’s all kinds of statistics about the incidents of wage theft. There’s so much data about how much wage theft occurs. Those are some of our challenges for sure.

What are some of the biggest issues you see in the building trades?

JS: Our field inspections are focused mostly on minimum wage workers, and that’s to make sure there’s a floor in the state of California nobody should be required to live and work beneath. For the building trades, in prevailing wage and public works, we’ve really talked about preserving the middle class. Getting people into home ownership and being able to provide a decent standard of living for their families. But the challenge there too is wage theft. Workers not being paid the correct prevailing wage in construction jobs; This is not unique to construction and the building trades, but it’s definitely a problem. The more layers you have, the more abuse you have. At the top you have downward pressure to cut labor costs. The more layers you have, the more possible it is for wage theft and abuse. It’s a real challenge to enforcement and a real challenge to making sure that the hard-won protections are enforced.

What about this work interest you?

JS: My parents were Chinese immigrants. Growing up, my mom sewed my clothes. I’ve seen their struggles, but my mom got a job working for L.A. County. It was a good union job where you were able to live a good life and make education a priority. I got to go to college and law school.

I realized that one of the biggest challenges for young people is seeing their parents go to work, full-time, year-around, and not be treated with the dignity that they deserve and not have their rights enforced. It also created challenges in youth in terms of believing in the system. Their parents are working hard, doing what they’re suppose to do and then being cheated. So it developed for me early on an interest in workers rights and fighting for workers. So when I came out of law school, I got a fellowship, I wrote my own job description and I went to work for a nonprofit in Los Angeles called Asian American Center for Advancing Justice. I worked there for 17 years. That’s what I was doing until GOv. Brown was elected. Part of my work during that time was advocating the Labor Commissioner’s Office to do things right by workers. To interpret the law correctly and consistently, to create a welcoming climate so that workers who, if they are not treated properly by government, then they lose all faith. When Governor Brown was elected, some people said to me, you’ve been doing advocacy for some time, maybe you want to be a Labor Commissioner. And I said ‘no, I definitely don’t want to be Labor Commissioner.’ But I was convinced.

My confirmation was five years ago, and there was a Republican on the committee who was going to vote no because of my background and the work I’ve done before. My daughters were there and it was surprising to them that somebody would not vote for their mother.

What I’ve done in my past is what makes me qualified for this job. It’s what’s going to make me fight every day to do the right thing.

My daughters have had the opportunity to grow up watching me do something meaningful, do something I care about. They got to see all that and they have a strong idea of what they can do and that change is possible.