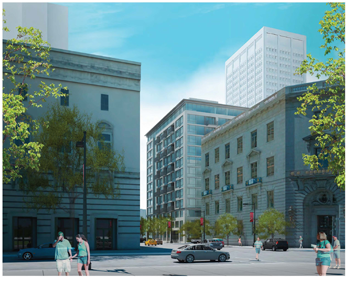 The AFL-CIO Housing Investment Trust (HIT) is making a $58 million financing commitment towards construction of 101 Polk, an $82.8 million multifamily development in San Francisco. The all-union construction is expected to generate approximately 350 union jobs.

The HIT investment of union and public employee pension funds will help finance the 13-story building offering 162 housing units with underground parking at the northwest corner of Polk and Hayes streets. To help the city address its shortage of affordable housing, 19 of the units at 101 Polk will be affordable to residents earning up to 55 percent of the area median income.

The project site is adjacent to the city’s Civic Center in the Central Market neighborhood, an area that is undergoing significant revitalization to create a vibrant urban environment that takes advantage of its transit-rich location and many cultural amenities.

“101 Polk will be a great addition to the Central Market neighborhood for many reasons, including its sustainable and green features,” said HIT Chief Operating Officer Ted Chandler.

“We know the HIT will make sure all the work is done union,” he said. “That means more family-supporting union jobs for our members and more high quality union-built development for the community.”

Emerald Fund principal Marc Babsin said Pacific Structures would be the general contractor for the project, which will break ground in late March. He said he was pleased that Emerald Fund was partnering with the HIT and using union labor. Emerald Fund is also the developer at 100 Van Ness, where IBEW pension funds are helping fund the project through the Emerald Fund’s equity partner, the National Electrical Benefit Fund. Babsin said 101 Polk would take about 20 months to build, and will be completed by Fall 2015.

Chandler said the HIT has invested more than $285 million in San Francisco, building 1,780 units of housing and bringing more than half a billion dollars of development to the city. HIT-financed projects represent more than 2,800 jobs for members of the local building and construction trades unions. The hundreds of union workers to be employed on the 101 Polk project are helping the HIT reach its goal of creating 25,000 union construction jobs by 2015 through its national Construction Jobs Initiative. Nearly 18,500 union construction jobs have been generated since 2009 under the initiative.