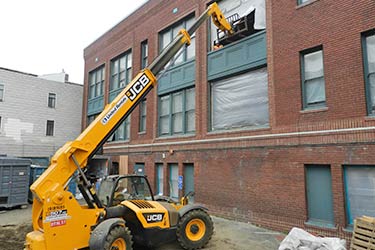 Modernization work at John Yehall Chin Elementary School in North Beach is ongoing this summer, thanks to an influx of bond funding. - Photo by Paul Burton

Modernization work at San Francisco Unified School District sites covered by the Project Labor Agreement between the Building Trades and School District is progressing on schedule this summer. San Francisco voters approved a $531 million Facility Bond Measure in November 2011 – the third and final installment of $1.3 billion in bonds to modernize and improve safety in SFUSD facilities.

Work on the modernization of John Yehall Chin Elementary School on Broadway in North Beach began in June. The interior of the three-story building was completely gutted – crews completed the bulk of the demolition and abatement work by early July, when Organized Labor visited the site. A small crew of laborers with Sterling Environmental Corporation were completing the removal of lead-based paint and removing some of the debris from the school.

Inskip James. Construction Manager for Vanir Construction Management, said the modernization work this year is the first for the school since it was built in 1914, except for some structural improvements made in the 1930s and fire alarm systems installed in the 1940s. The school will be seismically upgraded to meet current earthquake codes with new shear walls through the three floors and steel brace frames. The all-brick exterior will be preserved and strengthened with new cement in-fill and braces.

Other modernization work will include new state-of-the-art fire alarm systems and data systems, plumbing and electrical fixtures, fire sprinklers, and ramps and rails to improve accessibility for students with disabilities and bring the building into compliance with the Americans with Disabilities Act.

Sajeev Madhavan Pillai, SFUSD’s Project Manager for the J.Y. Chin project, said the school will also be more energy efficient. A new condenser boiler – the first of its kind in the District – will be more energy-efficient than older boilers by re-using condensed steam.

“It is a pilot project funded by Prop 39 money,” Madhavan Pillai said. Passed in 2012 with strong support from the Building Trades and other unions, Prop 39 provides funding for energy efficient systems and construction in California public schools. Madhavan Pillai said Prop 39 funds represent about 6 to 7 percent of the project’s budget. Other energy saving improvements also partly funded by Prop 39 include new insulation, a cool roof, dual glazed windows and low voltage LED lighting that can be controlled by sensors.

Madhavan Pillai said the Project Labor Agreement with the Building Trades is working well, but the main challenge on the project is meeting the District’s local hire goals. The District noted last fall that the booming private sector construction ongoing in San Francisco made it more difficult to find local workers to fill jobs. SFUSD also has many projects occurring this summer. James also noted that some of the local, San Francisco-based contractors, like TLK Steel, are able to provide a large percentage of local workers who are also their core workers. Madhavan Pillai said the District representatives meet with contractors on a regular basis to work on meeting the local hiring goals that call for 25 percent of construction workers to be from San Francisco.

While the current crew of laborers is small, James said the next phases will see many more workers on the project, particularly when framing work starts as all the classrooms are rebuilt. Work will continue through the summer and the next school year; the 264 Kindergarten to 5th Grade students will take classes at the Sarah B. Cooper school as their school is re-built. The construction is on schedule to be completed by next summer, with students set to return for the 2017 school year.