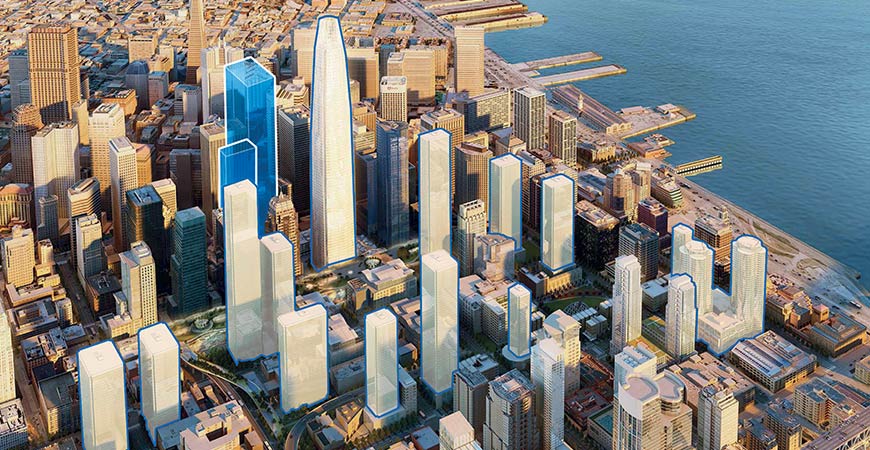 The San Francisco Planning Commission approved the new Oceanwide Center project at its May 5 meeting. Developer Foster + Partners plans to build two mixed-use towers at First and Mission streets: A 605-foot tower featuring a 266-room hotel and residences, and an 850-foot office and residential tower. The new skyscrapers within the Transbay redevelopment area will be among the tallest in San Francisco and will have 2.1 million square feet of office, hotel and residential space, with 182 condominiums and 43,000 square feet of retail space.

The development will also feature new public spaces and pedestrian connections, while also restoring and revitalizing two historic commercial buildings on the site at 88 First St. and 78 First St., according to Foster. The buildings, designed by architects at Heller Manus, will be “open, accessible and transparent,” according to the developer. The buildings will be located on the same block as the Transbay Transit Center which is currently under construction.

In approving the project, the Planning Commission stated that “the Project will generate substantial revenues that will contribute to the development of transportation infrastructure, including the Transit Center and the Downtown Rail Extension, and other improvements envisioned by the Transit Center Plan.” It will also “add employment and housing opportunities within an intense, walkable urban context” where employees and residents would be able to walk or utilize transit to commute and satisfy convenience needs without reliance on the private automobile. This pedestrian traffic will activate the sidewalks and open space areas in the vicinity.

Stefan Behling, Senior Executive Partner, Foster + Partners, said, “This development will be the new exemplar of urban living with exciting places to live and work right alongside the central transport hub.” He noted that pedestrian routes cutting across the site would enable residents and employees to access to shops, cafes and green spaces in the neighborhood.

The towers will also seek LEED certification through energy efficient systems like onsite water collection and re-use, microturbines for heat and power, natural ventilation, natural lighting, and recycling within the building.

Beijing-based Oceanwide Holdings purchased the First and Mission site in early 2015. The developer will pay $33 million towards construction of affordable housing offsite.

The groundbreaking for the project is scheduled for November 2016, with construction expected to be completed within about 55 months.

The UK-based developer did not respond to requests for more information about the choice of a general contractor or commitment to union labor.