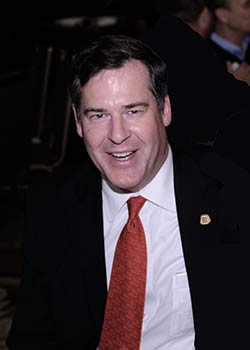 Mulligan is a five-term Financial Secretary for Carpenters Local 22 and long-time member of the local. He is also a Trustee of the San Francisco Building and Construction Trades Council. Mulligan moves on from his role as director of CityBuild and replaces Donna Levitt, who held the position of OLSE director since 2002.

Mulligan took some time out of his busy schedule to talk with Organized Labor about his new position.

So what is the Office of Labor Standards Enforcement?

Patrick Mulligan: It enforces labor laws adopted by voters and the Board of Supervisors. It was set up initially for prevailing wage enforcement, but over the years the office has been expanded to provide support for more recently adopted worker protections, some of which include San Francisco minimum wage, paid sick leave requirements and the Health Care Security Ordinance.

What does the director do?

Are you no longer director of CityBuild?

PM: Officially I’m not, but I’ll always be tethered to that office and what it represents in terms of workforce development.

How long were you director of CityBuild?

PM: I was there for four years.

This is the second appointment or position you’ve had in the Mayor Lee administration. What has Mayor Lee done for the Building Trades in the city?

PM: We are experiencing one of the strongest construction economies in the United States. And it is due in large part to Mayor Lee’s proactive policies to support construction and development in San Francisco. Expanding our housing inventory with a focus on affordability, improving our transportation systems and supporting infrastructure have all been priorities of this administration. Some of these projects were in the works for a long time while others have emerged more recently, but they have all been supported through his initiative.

Why is all this important to you?

PM: That’s a great question, something I don’t really think about much. As a career tradesperson, I’ve been a direct beneficiary of these protections so I take their importance very seriously. I grew up in a Union building trades household as well and learned firsthand what this all meant. My father was an immigrant tradesman, and his earnings put food on the table and provided an education for myself and my brothers and sisters. I take all of this very seriously and I’m sensitive to changes in the workforce and changes in the industry.

Are you still a working carpenter?

PM: Let me tell you something: I’ve never given up my tools. They’re still hanging up at home and I’m ready to go back to work at any time. I always identify as a tradesperson and I bring that sensibility wherever I go.