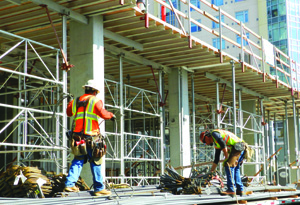 Work continues at 399 Fremont, which will feature views of San Francisco Bay.

Swinerton Builders has begun work at 399 Fremont. The project includes a 42-story, 440-foot tower with 447 “ultra-luxury” rental apartments averaging 800 square feet each and an eight-story podium with 251 parking stalls. The two structures will total approximately 600,000 square feet. In 2006, the project was approved for 452 dwelling units. All buildings on the site, including 333 Fremont next door, were demolished in February 2008. Swinerton recently completed a new apartment building at 333 Fremont.

According to Swinerton, the project is “designed to celebrate the dynamic and urban lifestyle of the city.” The design features expansive glass providing panoramic views of the San Francisco Bay. Planned amenities include 24-hour valet parking and security, attractive resident walkways, a dog run, rooftop outdoor sky terraces, a library, a lap pool, a spa, a state-of-the-art fitness center, designer landscaping, and a club house suited for high-class entertaining.

The union contractor cited its extensive experience building multifamily high-rise buildings in San Francisco’s high-density urban environment as a factor in winning the project. Swinerton is currently building the 27-story, 378 foot tall Class A office tower at 535 Mission – another project that was stalled during the economic downturn and then re-started. Swinerton also has experience in sustainable building practices to meet LEED guidelines. The 399 Fremont project is targeting LEED Silver certification.

A posting on Swinerton’s blog site noted that the contractor will use a new Building Information Modeling application, BIM 360 Glue, throughout the entire process of planning and construction. BIM 360 Glue is described as a critical tool during the construction phase as it enables construction crew managers to access updated project data and models on their iPads or other tablets. It streamlines collaboration among construction team members by hosting the latest model files on the cloud, making current information accessible to everyone on the project including the subcontractors and field managers.

Ryan Engineering is doing excavation at the site, and some shoring and foundation work has begun with a small crew of carpenters, operators, laborers and iron workers.

The San Francisco Planning Commission approved the latest version of the residential high-rise tower at Fremont and Harrison in July 2012 and determined that it is consistent with the Rincon Hill Area Plan adopted by the City in 2005. The plan calls for, “the conversion of the existing Rincon Hill area to a high-density residential neighborhood with significant pedestrian and residential amenities such as parks and open space.” The Planning Commission noted that, “The project design, with its residential steps and stoops, and ample landscaping will provide a rich pedestrian environment and play a key role in the creation of an active neighborhood.” The project is slated for completion in April 2016.