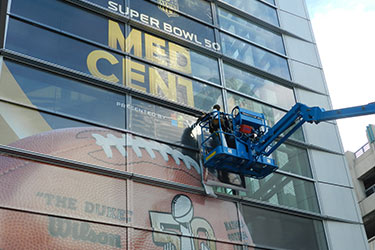 Sign and Display Local 510 members install a banner on a Moscone Center window in preparation for Super 50 activities. - Photo by Paul Burton

Several hundred building trades union members worked intensively during the week leading up to the start of Super Bowl related events in San Francisco to set up Super Bowl City at the Embarcadero and the NFL Experience at the Moscone Center, which opened on Jan. 30.

Organized Labor visited the Moscone Center and Super Bowl City Jan. 28 and 29 with Sign and Display Local 510 Business Representative Joe Toback. Toback said 250 Sign and Display 510 members were working at Moscone, with another 150 at various sites around the Bay Area including Super Bowl City, Levi’s Stadium, the San Jose Convention Center and the Santa Clara Convention Center. While the bulk of the work setting up concert stages and areas for broadcasters was done by members of the Theatrical and Stage Employees (IATSE Local 16), Local 510 members built display booths and venues for corporate sponsors like Chevron, Budweiser and Verizon, and for Sonoma County’s wine tasting area.

Within the Moscone Center, a similar arrangement saw IATSE members building stages and setting up lights and sound systems while Sign and Display members hung banners and signs, built booths for apparel sellers, and installed displays and applied graphics. Toback said the union didn’t have to bring in any new workers, and was able to fill the jobs from among the existing members. He pointed out that the union was able to provide highly skilled workers with expertise in specific areas like applying graphics that covered large parts of Moscone’s glass exterior. Toback pointed to the crew applying the NFL banner on the southwest façade of Moscone and noted that Local 510 has a training program that teaches and certifies the use of motorized suspended scaffolds for the graphics application work.

Local 510 member Mark Hamer said he had been working at Levi’s Stadium, but once crews were caught up there, he was brought to Moscone to help with the graphics application work inside. Tom Koski, foreman for a crew from installation and dismantle contractor Czarnowski, said he had between 18 and 22 members working on setting up apparel booths. In Moscone Center South, a Local 510 member used an electric-powered 60-foot boom lift to reach a circular layered area where scenes of the city were installed.

Working in Moscone South, member Stuart McIntosh said all the unions sat down and worked out jurisdictional issues before the work started.

“We got it 90 percent right,” he said. “Workers are fired up and excited to be here. We have a ton of Raiders and 49ers fans” in the crews.

Toback said five months before the event, leaders of Sign and Display, IATSE, IBEW and the Teamsters met and for the most part reached agreements on jurisdictional boundaries.

“It helped us get to some of the core issues,” he said.

“We were informed two weeks ago that local hiring would be required,” Toback said. “We worked with City Build and our contractors to make sure we could meet the requirements.”

City Build director and Carpenters Local 22 Financial Secretary Pat Mulligan said Local 510 had done a great job working with City Build to meet local hire requirements. Exact numbers of how many local apprentices or pre-apprentices were placed in Super Bowl jobs were unavailable as Organized Labor went to press, as work breaking down continued after Feb. 8.

At a presentation about Super Bowl 50 events on Jan. 14 at Pier 1, a representative from the San Francisco Metropolitan Transportation Commission said 167 San Franciscans had been hired to work on Super Bowl 50 events, but didn’t specify the types of jobs filled. Super Bowl 50 Host Committee spokesman David Perry said the Committee and San Francisco agencies had done “aggressive outreach to local businesses, women and minority owned businesses, and local contractors” to place San Francisco residents in jobs. He said the City and the Host Committee were engaged in an economic impact study to determine the number of jobs generated. The study will also presumably look at the benefits to local retailers, hotels and restaurants and whether any increased sales tax and hotel tax revenues would offset the estimated $3.5 to $4 million the City will spend to cover transportation, public safety and other costs associated with Super Bowl 50. Perry also said that Super Bowl 50 organizers had reached out to construction contractors working on projects in and around the Super Bowl City area to try to mitigate the impacts of street closures and traffic congestion on scheduling deliveries to construction job sites.

Another issue for the trades was the added layers of security for the Super Bowl events. Spokesman David Perry told residents at the Jan. 14 meeting that “security trumps everything” and that “the Super Bowl has been a level one security event for the Department of Homeland Security since 9/11.”

While Sign and Display 510, IATSE and IBEW Local 6 members worked setting up the NFL Experience at Moscone, crews of Operating Engineers, Ironworkers, Carpenters and Laborers worked on the ongoing remodeling of Moscone.

Greg Russie, a foreman with Edlen electrical at the Moscone Center and a member of IBEW Local 6 since 1999, said the Moscone remodeling work hadn’t impacted the work of his 14-member crew. IBEW 6 members with Edlen and Freeman Electric mainly worked on installing and hooking up temporary power for the Moscone Center vendors and media, including for satellite trucks and broadcasters. The work was on schedule the day before the opening of the NFL Experience, Russie said. Freeman had crews of IBEW, Sign and Display and Carpenters at Moscone. A separate crew from IBEW 6 installed power, lights and CAT5 and HDMI hook-ups in other areas of Moscone.