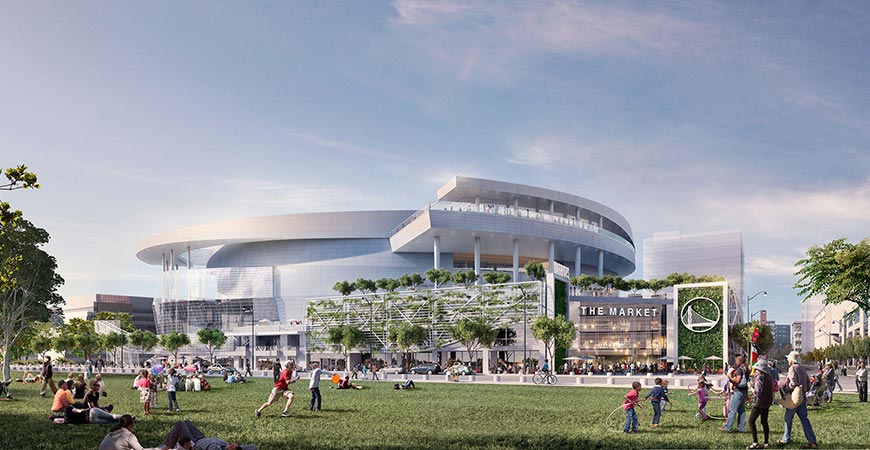 The Board of Supervisors rejected an appeal by the Mission Bay Alliance to the Environmental Impact Report for the Warriors’ proposed arena in Mission Bay. - Images Courtesy Golden State Warriors

“I look forward to bringing the Warriors back to San Francisco with a great venue for games, concerts and other events.”

As the Golden State Warriors continued their winning ways on the basketball court in December, the team also won at City Hall, as the San Francisco Board of Supervisors rejected an appeal of the Environmental Impact Report for the Warriors’ proposed arena in Mission Bay, near the UCSF Medical Center.

In a unanimous vote on Dec. 8, the Supervisors rejected the appeal by the Mission Bay Alliance, a group that includes former UCSF officials formed last year to stop the project. The university itself officially backed the arena in October, after reaching a deal with the Warriors to mitigate the impacts of any increased traffic near the hospital. The agreement between the team and UCSF establishes a $10 million Mission Bay Transportation Improvement Fund that will pay for a team of traffic control officers to help smooth the flow of traffic during events, as well as new lanes dedicated to vehicles going to the UCSF hospitals.

Several speakers at the board meeting expressed concerns about traffic in the area and how it could delay people who need to get the hospital in an emergency. The supervisors voted to OK the Traffic Improvement Fund, which will be funded by the Warriors, as an effective measure to address the concerns of neighbors and hospital visitors.

Newly installed Supervisor Aaron Peskin sat out the vote, saying he had been traveling and hadn’t had time to study all the documents. Other supervisors expressed support and praised the Warriors’ willingness to work with the community to improve the project. Supervisor Jane Kim, who represents the Mission Bay neighborhood, noted that the arena project has been subject to a lengthy public planning process, and has received widespread public support.

The Mission Bay Alliance filed a lawsuit against the Warriors and San Francisco January 7 to stop the project, citing issues of traffic impacts to the nearby UCSF medical facility. The Warriors issued a statement noting that, “During three years of intense public scrutiny, the Warriors arena won approval from 100 percent of boards, agencies and commissions that considered the matter: the Board of Supervisors, the Office of Community Investment and Infrastructure, the Mission Bay Citizens Committee, the San Francisco Municipal Transportation Agency and the Planning, Entertainment, Port and Public Utilities Commissions. The decision of our elected leaders to bring the Warriors home to San Francisco will be upheld by the courts, and this frivolous lawsuit brought by a secretive group of wealthy donors will fail.”

Earlier on Dec. 8, Warriors President and Chief of Operations Rick Welts attended the San Francisco Building and Construction Trades Council meeting and signed a letter officially pledging the team to build the project under terms of a project labor agreement with the trades. SFBCTC Secretary Treasurer Michael Theriault explained that there is a pre-existing PLA for projects in the former Mission Bay Redevelopment Area, but that, “The Warriors have been pro-active in reaching out to the Building Trades, and said up front that they would commit to complying with the PLA.” The binding letter of intent signed by Theriault and Welts shows that the Warriors are committed to building the project with union labor, Theriault said. Welts told Building Trades delegates that it was great to work with the trades, and meet new friends and representatives of organized labor who are involved in the community. “I look forward to bringing the Warriors back to San Francisco with a great venue for games, concerts and other events,” Welts said.

Several building trades union representatives rallied at City Hall before the Board of Supervisors meeting to express support for the project, and spoke in favor of the development. Over 2,000 construction jobs could be created over the three years of construction and 1,757 permanent jobs created. The existing PLA for Mission Bay Redevelopment Area projects requires that 50 percent of hires are local individuals, 6.9 percent are women, and 25 percent minority.

Along with an 18,000 seat arena and event space, the Mission Bay Arena project will include 580,000 square feet of office/lab space, 100,000 square feet of retail space, a 3.2 acre public plaza on the west side of the arena, and 950 parking spaces for office tenants and visitors.

After the Board of Supervisors vote, Theriault said, “The Warriors’ arena, like AT&T Park, will turn out to be a tremendous asset to the city and the neighborhood. We can be proud to be part of that.” Theriault said the city had done a good job working with the UCSF hospital and the Warriors to address potential traffic impacts.

San Francisco Mayor Ed Lee called the Board’s decision to approve the arena a huge win for the city. “I thank the Board of Supervisors for approving this important project which will benefit San Franciscans for generations,” Lee said in a statement. “The Warriors are inspiring a new generation of fans throughout the Bay Area. I can’t wait to welcome them home to San Francisco.”

Warriors president Rick Welts said, “We’re ecstatic after so many years of work.”

The state-of-the-art Golden State Warriors event center will be privately financed, with no taxpayer subsidies. Barring a legal challenge and after other approvals, the Warriors complex could break ground this year, with the arena opening in time for the 2018-19 NBA season.