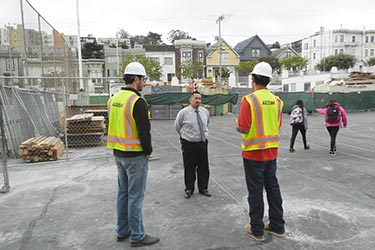 James Lick Middle School Principal Paul Quesada talks to AECOM representatives. District and school staff are working together to ensure that construction activities aren’t disrupting the students’ educational experience and the work is completed on schedule. - Photos by Paul Burton

Modernization work at more than 30 San Francisco Unified School District sites covered by the Project Labor Agreement between the Building Trades and the School District is continuing during the 2015 school session, and progressing on schedule. San Francisco voters approved a $531 million Facility Bond Measure in November 2011 – the third and final installment of $1.3 billion in bonds to modernize and improve safety in SFUSD facilities. The School District extended and revised the PLA that covered earlier bond funded projects in August 2013 to cover the new projects of $1 million or more.

Work is progressing this year, with many phases completed and seeing significant progress this summer. Work is also ongoing during the school session, with contractors, workers, SFUSD staff and school staff working together to ensure that construction activities aren’t disrupting the students’ educational experience and the work is completed on schedule.

Swaroop Mohanlal, Project Manager for the construction manager, AECOM, gave Organized Labor a tour of the jobsite in early September. Mohanlal said work started in December 2014 and will continue in phases until completion in September 2016.

Mohanlal said the seismic upgrades to the school built in the 1930s consist of reinforcing the entire structure. Reinforced concrete shear walls are being built and structural steel collector beams installed on every floor to transfer the load along the building’s corridors. Mohanlal said the seismic work is mostly complete, with some shotcrete work done on weekends. He said most of the work goes on during the school day, with drilling and other noisier work done after school hours.

BHM Construction is the general contractor for the project. Union subcontractors on the project include Harrison Drywall, TLK Steel, Bay Cities Mechanical for plumbing, AHC Glass for windows, Ascent Elevators, and Hazard for concrete work. About 25 construction workers are on the job, including laborers, carpenters, electricians, and iron workers.

While the project is on schedule now, Mohanlel said there were some challenges and delays over the summer, partly due to changes in the design. He said the contractors were able to bring in extra labor through the union hiring halls to get back on schedule. “Having the union workforce available is good,” he said. “They have the skills and keep up the high quality of the work.” There have also been challenges meeting the District’s goals for local hiring, with 34 SFUSD projects occurring this year and contractors already busy with the many private sector projects ongoing in San Francisco.

Mohanlal said there was a lot of demolition work, including gutting the old kitchen and removing an interior wall to expand the cafeteria. Old vinyl flooring containing lead was removed in the first phase of the project. The school’s façade, interior tiles and murals, and plaster ceilings are being retained to maintain the character of the 1930’s style building.

Mohanlal said a new elevator will have its mechanism on the roof inside a tower that also reflects the look of the building. Another elevator outside the building will connect to the upper floors via a bridge. Other modernization work on the 100,000 square foot, three-story building includes installation of ramps, rails and wheelchair lifts. The accessibility upgrades are the first for JLMS, and will bring the school into compliance with the federal Americans with Disabilities Act.

The school’s band room, which was formerly only accessible from an exterior stairwell, is now connected to the rest of the school’s interior. It also received new acoustic treatments and an instrument storage area. Classrooms on the first two floors are active, and students separated from the construction zones. Other classes are held in temporary classrooms as work on the third floor continues.

JLMS Principal Paul Quesada told Organized Labor, “I have been impressed with how quickly and efficiently the project is coming together.”