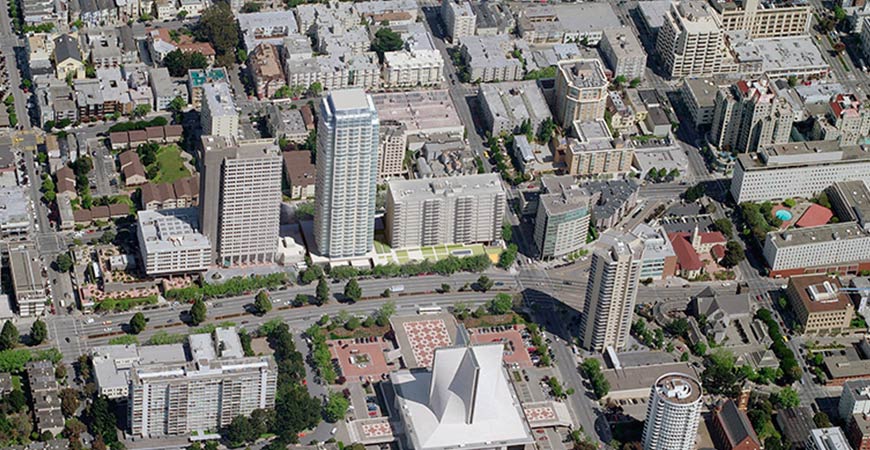 The 36-story, 262-unit residential tower on Cathedral Hill proposed by the ADCO Group will go before the San Francisco Planning Commission this fall. The developer had proposed a tower at 1481 Post St., adjacent to the Cathedral Hill Plaza, in 2006 and sought the support of the SFBCTC in 2007. Linda Corso, general manager of Cathedral Hill Plaza Apartments, told SFBCTC Business Agents at the time that the project would “absolutely be all-union” and that her firm would insist on having union contractors for the job. Corso reiterated that the developer is still committed to union labor in a recent interview with Organized Labor.

Union contractor Webcor is working with ADCO as an advisor for the environmental review and for pre-construction. Corso said Webcor may become the general contractor for the project. ADCO has worked with Webcor on several projects in the past, including the Museum Parc condos, Furniture Mart and the 875 Stevenson office complex. According to Webcor, the 1481 Post project could create 1,100 to 1,200 construction related jobs, based on the contractor’s experience with the similarly sized Rincon Phase 2 project that employed around 900 workers.

“We worked with the Planning Department and the community and have a much better project now.”

Corso said the original proposal has changed significantly since 2007, reflecting years of neighborhood feedback and the San Francisco Planning Department’s input. She said the new design fits in better with existing buildings in the area, with more stone, but still a fair amount of glass. New York-based SLCE Architects and MWA Architects, based in San Francisco, are the designers of the new building. ADCO submitted new designs for the condo tower in 2013. The new building will be to the west of 1333 Gough St. – the existing 14-story building with 169 residential apartments.

Last fall, the project again went before the Planning Commission and faced some opposition from neighbors concerned about the building’s height, shadows and traffic impacts.

Corso said while there has been some opposition from neighbors in a nearby building, ADCO has done extensive outreach and meetings to groups in the Western Addition. “We heard from the community that they want more lighting in the area for public safety, so we are addressing that, as well as other improvements,” Corso said. “We worked with the City to incorporate more streetscape improvements, like a mid-block crossing. We worked with the Planning Department and the community and have a much better project now.” She said the developer is committed to smart-growth principles and incorporating San Francisco’s urban planning goals, which call for a greater level of high density and transit-oriented housing. Along with the streetscape improvements, the project will provide parking spaces for bicycles and car share services. Public amenities also include a cafe on Post Street and renovations to the fitness center in Cathedral Hill Plaza.

Corso said most of the opposition to the project now comes from the owners of the adjacent Sequoias senior community on Geary St. The San Francisco Business Times reported that, “The owners of the senior center hired Heller Manus Architects to develop an alternative proposal for the ADCO site… The alternative design could be used as a point of comparison in the environmental study and illustrate ways a feasible project could be built without exceeding the current 240-foot height limit” for the area.

The Cathedral Hill Plaza Apartments will also get improvements and repairs. Corso said that the developer has pledged to not pass on the costs of the improvements to tenants of the rent-controlled building at 1333 Gough if the 1481 Post project is approved.

Corso said ADCO is also putting together a package of community benefits, including funding training for long term jobs.

The developer is aiming for 1481 Post St. to be LEED Gold certified by the US Green Building Council by incorporating the latest technology to enhance water and energy conservation, public transportation access and include on-site care sharing and bike-parking programs, according to ADCO. The proposed project would comply with San Francisco Green Building Requirements for energy efficiency as applicable and for use of low-emitting flooring, according to a preliminary repost by the Planning Department.

According to Planning Department documents, the 1481 Post St. building would have a mat foundation under its core that would extend to perimeter columns. The mat foundation would extend approximately seven feet below the lowest parking slab elevation, and would include reinforced concrete walls. Project construction would take about 27 months in all in overlapping phases, including: demolition, excavation, shoring, foundation work, below grade construction, base building construction, and exterior and interior finishing.

The project is scheduled to go before the Planning Commission in October.

“We would love to be entitled by early 2016 and start on the work drawings,” Corso said.

Demolition of an existing parking structure and excavation would then start shortly after.