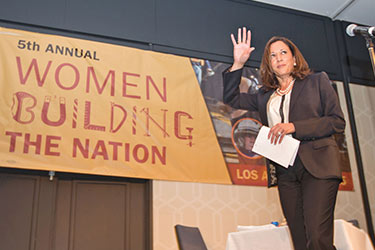 More than 1,200 tradeswomen descended on Los Angeles in May for the 5th Annual Women Building the Nation conference. The crowd was electric and spirits were high as women (and men) from across the nation, and even a few from outside it, came together in camaraderie and solidarity to celebrate their careers in the trades.

“I enjoy going to the conference because there is always something to bring back,” said Christie Peterson, the first full-time female instructor at IBEW Local 6’s apprenticeship program. “Whether it be about becoming a first-time home buyer, learning the steps to advance within one’s union leadership, becoming a mentor or coping and handling on-the-job conflict. I look forward to sharing what I learn with my sisters and brothers when I give a report at my union’s general membership meeting.”

Booker got a few laughs from the already buzzing crowd on Saturday morning when he quoted Eleanor Roosevelt, “Do one thing every day that scares you.” And followed it up by looking at his watch and saying he had now accomplished that feat by 9:45 a.m. But he also brought it back around to the amazing accomplishments of the women before him. “You are the pioneers,” he said.

And it’s true. Making up less than 3 percent of the industry, these women are pioneers of their industry. While men in the construction trades have come a long way in recent history in accepting and welcoming their female counterparts, it is still an industry dominated by men. But that’s not stopping these women from doing a job they are passionate about.

“It’s really important to show how many women we really do have in the trade, what they do, the hardships that they go through, and coming out of it on top,” said Tara Garner, a photographer representing Ironworkers Local 433 (Los Angeles/Las Vegas). “The brotherhood, the sisterhood of the trades is about supporting everybody and bringing everybody together and having each other’s backs in solidarity.”

This was no more apparent than at the “Tools of the Trades” workshop where women from all over the country displayed and discussed the gear they use on the job and what they have built with it.

“Women can do anything that they want to do. And it’s so wonderful to see all these women doing what they love,” said Amanda Altomare, a bricklayer of eight years from BAC Local 5 in Cleveland, OH who has worked on several projects in downtown Cleveland.

“It’s good for us to know there are other sisters out there. When we have questions or problems or concerns out in the field, it’s nice to get a woman’s feedback,” said Carpenter’s Apprentice Denise Zavala from Carpenters Local 405 in San Jose. Zavala said that at one point she was homeless and that joining the trades has helped her get back on her feet. “This is something that has changed my life,” she said.

Many women spoke of life-changing events in the “LGBTQ in the Trades” workshop. There were stories of oppression and harassment, but there was also a sense that the industry has become much more accepting over the years.

Pat Williams, a retired Stationary Operating Engineer who came out in 1979, led the session that she described as “a safe place for the LGBT community within the tradeswomen community to be open about the issues that are going on.”

Sessions like this continued throughout the weekend and reflected the general themes of the conference: education, sharing stories, proudly displaying a passion for the job and thriving on the tradeswoman solidarity.