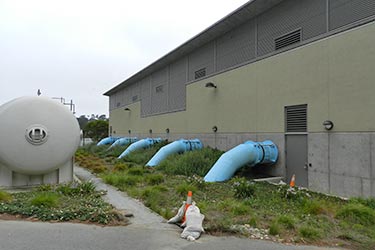 While San Francisco residents get high quality drinking water from the Hetch Hetchy Reservoir in Yosemite and other reservoirs, the San Francisco Public Utilities Commission (SFPUC) is now initiating projects to diversify the city’s water supply. The SFPUC aims to protect customers from service disruptions caused by a major earthquake, drought, or a decline in the Sierra snowpack by supplementing the primary water sources with local groundwater.

The Groundwater Supply Project is one of more than 80 projects that are part of the SFPUC’s $4.3 billion Water System Improvement Plan (WSIP). It includes seismic upgrades of many of the pipelines, pumping stations, tunnels and dams along the system’s 167-mile long aqueduct that brings water to San Francisco, as well as construction of new pumping stations and upgrades to local reservoirs. The work is covered by a Project Labor Agreement between the SFPUC and Bay Area and national building trades unions signed in April 2007.

Western Water Constructors is the General Contractor for the $14.9 million Groundwater Supply Well Stations project. Western Water was also the contractor for the Lake Merced pump station upgrade built between June 2009 and 2012. That $50 million project consisted of construction of a new pump building and an electrical utility building next to Lake Merced designed to resist fires and earthquakes. The project was the first for Western Water in San Francisco, and the contractor’s first experience dealing with hiring its crews through union hiring halls. At the time, the Santa Rosa-based employee-owned company was non-union, but Western Water has since become a signatory with the Laborers.

While Western Water is affiliated with the Associated Builders and Contractors (ABC), and that association has lobbied against PLAs, the contractor’s experience and success in working under a PLA shows that PLAs don’t discriminate against non-union contractors, said San Francisco Building and Construction Trades Council Secretary-Treasurer Mike Theriault.

Western Water’s Project Manager for the pump station project, Eli McGarva, told Organized Labor in 2009 that the PLA was working well for his company, and that the laborers from Local 261 and operators from Local 3 he had hired “were well-trained and good workers.” Western Water’s Project Manager for the new groundwater project, Matt Muntean, agreed and said the work “went well generally” and that “having experience working with the union subcontractors and unions allowed us to be confident with our bid” on the groundwater contract.

Hours generated by the WSIP

Muntean said the new project will consist of building the Lake Merced Well Station next to the pump station, as well as a South Sunset Well Station, West Sunset Well Station, Golden Gate Park Central Well Station, and a pH Adjustment Building at Sunset Reservoir. Muntean added that the work starting this month includes site improvements like clearing brush and installing retaining walls to protect Lake Merced from silt run-off when construction begins. In April, ground improvements started, along with drilling for concrete piers and shoring work. Muntean said Malcolm Drilling is starting some of the work and Drill Tech will do the drilling for the piers.

According to the SFPUC, the San Francisco Groundwater Supply Well Stations project will provide an average of up to four million gallons per day of groundwater to supplement the city’s municipal water supply. The new groundwater well facilities will supply groundwater to existing reservoirs, to be blended with San Francisco’s existing water supply and then distributed within the City. Groundwater provides approximately 40 percent of the entire State’s drinking water.

The Water System Improvement Plan projects are funded in part by $1.6 billion in bonds approved by San Francisco voters in 2002 – the largest capital project ever undertaken by the City. WSIP Projects in San Francisco County alone will generate an estimated 1.3 million hours of work for building and construction trade workers, including electricians, carpenters, laborers, heavy equipment operators, plumbers and truck drivers, according to the SFPUC.

Muntean, said being a recent signatory to the Laborers was a benefit for the company, as it can use its crews who have experience working on water projects for the company. He said working on the first groundwater well project was exciting and that there is heightened interest in the project because of the drought.