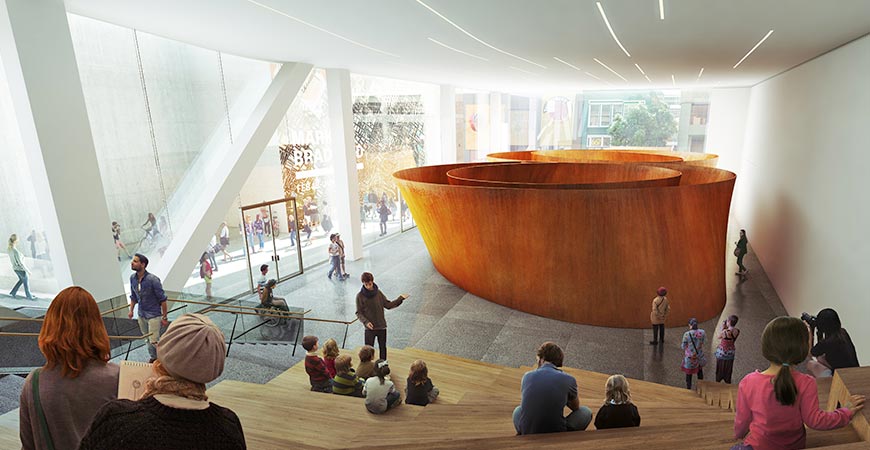 Some art is made. San Francisco native and contemporary sculptor Richard Serra’s is constructed – literally.

Serra’s mammoth sculpture, a 213-ton steel figure-eight titled “Sequence,” arrived at the San Francisco Museum of Modern Arts (SFMOMA) in 12 separate pieces in February. Construction crews then transported, lifted, and installed the artwork over the course of eight days as part of the ongoing SFMOMA Expansion Project.

“Sequence,” which stands at 67 feet long, 42 feet wide, and 13 feet high, is the signature sculpture of the museum’s expansion, and will occupy the majority of the new Howard Street Gallery, according to SFMOMA’s co-director of exhibitions, Jessica Woznak.

Union contractor Webcor Builders is the general contractor for the SFMOMA Expansion Project. Webcor is currently constructing the ceramic-coated glass walls and ceiling that will surround the sculpture and form part of the museum’s new ten-story wing, set to open sometime next year.

Webcor turned the gallery space over to BUDCO Enterprises Inc., a rigging and construction contractor based in Hauppauge, NY and internationally experienced in handling and assembling Serra’s sculptures, for the installation.

It took a total of 15 crew members to install “Sequence,” with riggers, crane operators, truck drivers, and flagmen working to lift the sculpture piece-by-piece and position it in its new exhibition home, said Joe Vilardi, a rigging specialist for BUDCO and leader of the SFMOMA installation.

This is the fourth time BUDCO has installed “Sequence,” and it was perhaps the most challenging installation.

“SFMOMA was the tightest space we had to assemble [the sculpture] in,” said Vilardi. “Sequencing of the delivery of the pieces was important because, as we assembled the sculpture, the room started to get very tight.”

BUDCO also installed the sculpture at the New York Museum of Modern Art, the Los Angeles County Museum of Art, and most recently, the Iris & B. Gerald Cantor Center for Visual Arts at Stanford University, where the company dismantled the work last January in preparation for its move to San Francisco.

The sculpture, consisting of 12 curved, steel plates, was transported to San Francisco, one plate per truck, three plates per day for four days.

“There was certainly a lot of coordination involved,” Wozniak said. “As the plates arrived, they were lifted off the trucks with a crane and brought into the gallery through Howard Street. [They] were then set into place with a gantry.”

California craning company Bragg Crane has worked with BUDCO on past Serra installations and helped assemble the sculpture at SFMOMA. “[They] understand the fragility and special conditions associated with such complicated installations,” said Vilardi.

Removing “Sequence” will be as big of a project as the installation, said Woznak.

There is no definitive time frame for how long the sculpture will be on loan. Eventually, in what will be a reversal of the installation process, construction crews will return to dismantle the sculpture, and the gantries and cranes will return to Howard St. once again to lift the sculpture piece by piece out of the gallery and onto the truck beds.

As part of the Howard Street Gallery, the sculpture will be both visible to passersby outside through the floor-to-ceiling windows and also open to museum-goers free of charge, located in one of SFMOMA’s new free-to-visit galleries.