Saying Farewell to the ’Stick 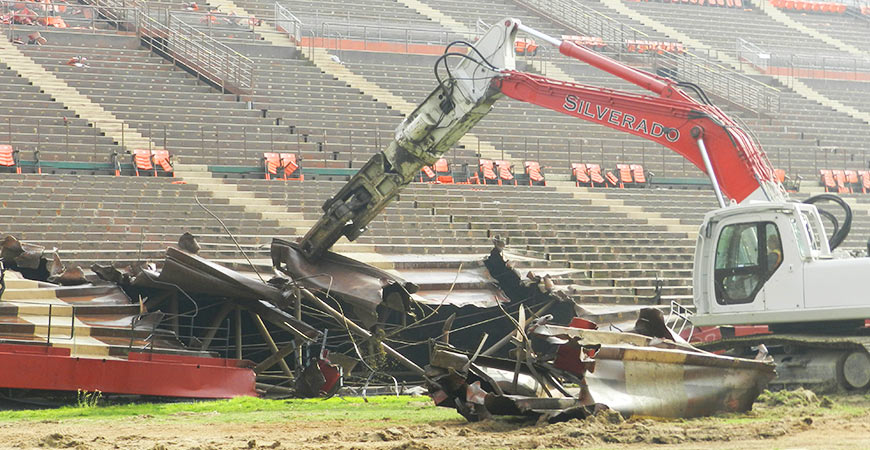 Implosion Called Off in Favor of Mechanical Demolition

It played host to such historic moments as “The Catch” and the Beatles’ final concert. Now the flame is slowly extinguishing for Candlestick Park.

Demolition of Candlestick Park began in early February, with crews of laborers and operating engineers from contractor Silverado ripping out lower seating sections with heavy shears and pulverizers, as the memory of former quarterback Y.A. Tittle watched from the 49ers “Ring of Honor.”

Members of the media were invited to photograph and videotape some of the demolition work on Feb. 4. Jermaine Smith, site development manager for developer Lennar, said crews had recently completed abatement work – removing any hazardous or flammable materials – and were breaking down some of the interior sections of the 54-year-old stadium. Most of the memorabilia and seats have been saved to be stored or sold, and a large portion of the construction debris – concrete, scrap metal and aluminum – will be recycled.

Smith said exterior demolition would start in mid-February and high-reach excavators would be brought in to start dismantling the upper portions later in the month and continue into April. Smith said there would be no wrecking ball but “precision demolition,” and that dust would be mitigated through using long reach jack hammers that have their own spray nozzles to water down the dust.

Mitigating the adverse environmental and health impacts of the demolition was a concern for a group of labor and community members who pushed for the mechanical demolition and stopped Lennar’s planned demolition by implosion. The San Francisco Building and Construction Trades Council approved a resolution by Laborers Local 261 on Jan. 15 that opposed the implosion of Candlestick and called for a mechanical demolition. Lennar announced the next day that it had scrapped its plan to implode the stadium.

A press release from the grassroots organization Our City stated that “the plume from the proposed implosion demolition would also have inundated local and state parks, a bird sanctuary, and wetlands habitat near the stadium. Workers at ground zero on the site would have suffered the brunt of adverse health effects. Conversely, mechanical dismantling provides far more employment for local union workers, because it requires skilled hands-on labor for several weeks or more; whereas the implosion would have been accomplished largely via explosives and machinery.”

Joshua Arce, Laborers Local 261 community liaison and president of the San Francisco Commission on the Environment said, “This was an opportunity for San Francisco’s building trade unions to stand in solidarity with community and environmental leaders to say that when we talk about jobs, we mean good-paying jobs that build communities, not hurt them.” The Laborers’ resolution cited a 2005 case study about the implosion of a hospital in Calgary, Canada, that found the potential health impacts of exposure to silica dust to be so great that researchers recommended “banning implosions altogether in urban settings.”

Lennar had applied for permits for both the implosion and for mechanical demolition, and the company withdrew its application to the Department of Building Inspection for the implosion demolition after the labor and community alliance expressed strong opposition to the plan.

“We have sought and received input from the community and our partner the City,” said Lennar spokesman Kofi Bonner in a statement, adding that Lennar had decided to “withdraw its request to implode the stadium.”

The former home of the Giants and 49ers will eventually be the site of the Candlestick Point development, with thousands of homes, hundreds of acres of new parks and office and retail space. Lennar announced in January that it would join with retail developer Macerich to build a 500,000-square-foot “urban outlet” featuring major retailers. The first group of homes at the developer’s nearby Shipyard development have also been completed.

The two projects being built by Lennar are done under a project labor agreement with the building trades and will create thousands of construction jobs over the next decade.