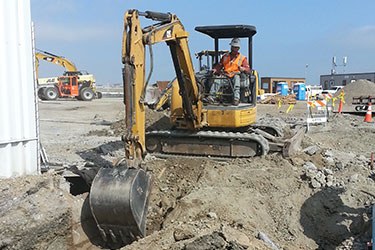 Hien Manh Tran served as a field sergeant in the U.S. Army, won a Purple Heart Medallion for his service in Iraq, and most recently founded Anvil Builders Inc., a successful and rapidly growing building and engineering company in San Francisco.

But the thing Tran is most proud of is being able to give back to the class of soldiers who saved his life.

As president and CEO of Anvil, Tran has two goals: to provide timely and effective construction and to make an impact for veterans transitioning back into the civilian world.

“The reason I could even start this company is because of the guys I served with,” Tran said. “If I was to die tomorrow, I’d want to know that I did something to give back.”

Tran founded Anvil in 2010, two years after he was injured by an improvised explosive device while serving in Iraq. He lost his right eye and fractured his femur in the explosion, retiring from the Army in 2009.

Though he had helped build his patrol base, it wasn’t experience with construction that inspired Tran to start Anvil, but rather, his platoon.

“I was out for over 20 hours, and these guys, due to their training and focus, brought me back to life,” said Tran, now 35 and armed with a degree in business marketing from San Jose State. “When I came back, my guys started calling me for advice — they wanted to know how to write a resume, how to find a job — and I could give them that advice because I had that life experience.” 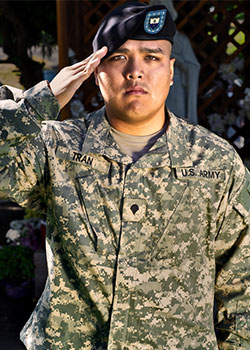 Field Sergeant Hien Manh Tran in August, 2008, one month before being deployed to Iraq, and two years prior to founding Anvil Builders.

“I realized I wanted to start a company where, if I could hire the guys I served with and help other veterans, that would be my purpose,” Tran added.

That purpose seems to have served Tran well. In the past four years, Anvil has grown from a $10,000 investment to a projected $18-20 million company.

“Eventually, and I say this probably arrogantly, but I’d like to be a $100 million dollar firm,” Tran said.

A certified minority- and service-disabled veteran-owned small business, Anvil, which specializes in large, public works, is striving to compete with the big dogs.

“It’s kind of a David and Goliath mentality,” Tran said. “It’s easy to start a conversation by saying, Hey, I have this certification and this certification, but then it’s almost like you’re asking for work. At Anvil, we want to earn our mark in the industry.”

Anvil self-performs 80 to 90 percent of projects, and offers services like earthwork and excavation, utility relocation, and building renovation.

The company is currently installing man lift operators and temporary facilities for the City-funded Transbay Transit Center Project, a project valued at over $20 million, Tran said. Anvil was one of the first disabled veteran businesses on site, he added.

Anvil Builders is signatory to the laborers and operators unions.

Ted Huang, project manager at Webcor Builders, a general contractor firm in San Francisco, has worked with Anvil on several projects, including the Transbay Transit Center and the Moscone Center Expansion.

He believes Anvil’s success is a reflection of the way Tran does business.

“I like [Tran’s] drive, forthrightness, and integrity,” Huang said. “It is important that his beliefs and way of doing business permeates across his organization, [and] we believe it does.”

Tran, however, attributes the success to his team, both on the field and in the army.

“When people say how much my company has grown, I always want to make a point that it’s the guys in the field that are out there making things happen,” he said.

Currently, five of Anvil’s 50 employees are veterans, including Tran.

Though the veterans on staff didn’t serve with Tran, his infantry group continues to inspire the company. “Anvil was the name of my infantry,” said Tran. “The tactical meaning is, when you drop an anvil on an object, you don’t leave until you’re done and you’ve done the job right. In that sense, the name Anvil belongs just as much to them.”