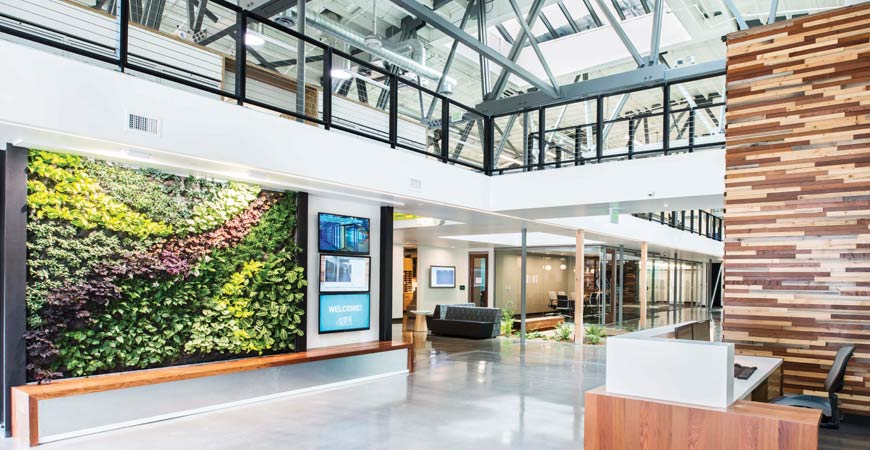 The lobby of DPR’s new offices at 945 Front Street includes a “living wall.” The construction company set out to create a green office that can also act as a model of efficiency. - Photos courtesy Drew Kelly

Actually, the national commercial contractor and construction manager’s new, sustainable San Francisco Bay Area Regional Office at 945 Front Street is an opportunity for expansion and progression within the company, and an opportunity for those outside of it to learn more about green building. DPR, which was first founded 24 years ago in Redwood City and Sacramento, finished building itself a new office last May. The office is not only double the size of DPR’s previous location, but also in the works of becoming the first official Net-Zero Energy Building (NZEB) in the city.

Typical cost per square foot for a project in San Francisco

Estimated energy savings per square foot in the next 11 years

Mike Humphrey, the San Francisco Regional Manager at DPR, said he and his team kept four goals in mind when looking for a new office space: achieving a healthy building, maintaining DPR culture, controlling cost and creating a “living lab” for sustainability.

By producing as much or more energy than it consumes, DPR’s San Francisco office aims to achieve Net-Zero certification from the International Living Future Institute’s Living Building Challenge program in May of 2015. This certification is part of the company’s dedication to environmental responsibility and leading industrial change.

By utilizing the office as a “living lab learning center,” DPR is able to showcase sustainable designs and products. As a living lab, the office provides partners a place to test prototype materials for efficiency and productivity and to then showcase successful products to prospective clients, according to DPR Project Manager Raymond Castillo.

Some prototypes currently being tested include energy-efficient fans, heat-reducing glass and a touch-screen building management system.

“There is a lot of interface with all of these systems, which has been a slight challenge,” said Castillo, “but at the end of the day when we get through the tweaks, the building kind of operates itself.”

Other challenging aspects of construction included working within an existing space and finding a balance between cost and sustainability.

“With a rooftop PV system, it could have been cheaper to build an entirely new roof, but it wouldn’t have been as sustainable,” Humphrey said. “In the end, we had to make some trade-offs.”

The 24,000-square-foot construction project took roughly six months from November 2013 to May 2014, and cost $200 a square foot. While most San Francisco projects cost $150 a square foot, DPR’s energy savings should pay back $50 a square foot in the next 11 years, according to Castillo.

DPR, a union contractor, employed carpenters and laborers to self-perform most of the project, including demolition, concrete, hardware, and acoustical ceilings. During construction, the company averaged eight to 10 union craftspeople per day, Humphrey said. With the exception of one specialty interior landscaper, all subcontractors were union labor.

According to Humphrey and Castillo, the most important thing they’ve learned from the new office is how to adapt.

“If you’re going to live in a net zero energy building, you have to behave differently,” Humprhey said. “You have to take care of the building like it’s a living thing. You have to adapt to the environment instead of making it adapt to you.”