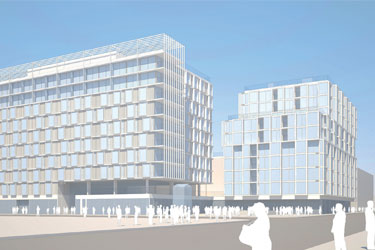 San Francisco-based developer Maximus Real Estate Partners is moving forward with plans for a housing complex at 1979 Mission Street. Slated for the corner of Mission and 16th streets, the 1979 Mission Street project proposes 303 apartments and 42 affordable units for sale, ranging from studios to four bedrooms. The project will be adjacent to Marshall Elementary School.

On September 22, Maximus and its architects from Skidmore, Owings & Merrill presented the latest design for the project to the Building Grounds and Services Committee of the San Francisco Unified School District Board.

Since late summer 2013, the developer has met on multiple occasions with Marshall Elementary staff, parents and neighbors – as well as retail tenants and other stakeholders in the Mission neighborhood – to seek input and design a project that will benefit the community. Arellano said in response to concerns from the community, the heights of the building closest to the school will be reduced to 55 feet so there won’t be any additional shadows cast on the school’s playground. Arellano said Maximus will also fully fund some school improvements, including raising the playground by 15 feet to address shadows.

The School Board indicated that it would study the changes offered by Maximus and seek more feedback from the school’s parents, staff and the community at large. Arellano said the board members are interested in the community benefits and want to hear more from parents. About 70 people who support the project attended the school board meeting, including parents, housing activists and residents interested in workforce housing. A handful of opponents spoke against the project.

“We had major support at the meeting,” Arellano said.

The project is not without controversy, as some Mission residents have protested the plan and cited it as an example of gentrification and potential displacement of working class families.

The heights of the building closest to the school will be reduced to 55 feet so there won’t be any additional shadows cast on the school’s playground.

“We are putting forth an innovative project and making our case to the Mission community and the school district that it will provide community benefits, with a new plaza, affordable housing and improvements to the neighborhood and the school,” Arellano said. He pointed out that Marshall Elementary is one of the smallest schools in the city, and would have its playground space doubled. “The project provides significant value for school enhancements, new housing, and public safety.”

“We are working on the mechanics of how to make it work,” Arellano said. “Because the project is adjacent to a school, it is important that it fit the needs of the community,” which wants and needs housing affordable to teachers.

The project will provide other community benefits by widening the sidewalks along Capp Street so Marshall Elementary parents and children have a safer space walking to school, and traffic will be slowed by having a narrower street.

The project will also include approximately 32,000 square feet of retail space on the ground floor with storefronts on Mission and 16th streets and at the 16th Street Mission BART plaza, with a mix of local businesses including a pharmacy, small grocery store or market hall, cafes and restaurants. 1979 Mission is within the Mission Eastern Neighborhood Plan, which calls for providing housing along transit rich corridors. The environmental review process for the project is moving forward – in February 2014 Maximus submitted an Environmental Evaluation Application, and in March 2014 submitted a Conditional Use Authorization application.

More community meetings are planned, as discussions with the school district, planning department, and the Mayor’s office continue. Once the project goes through the approval process, construction could start in early 2015, and be completed by the fall of 2016.