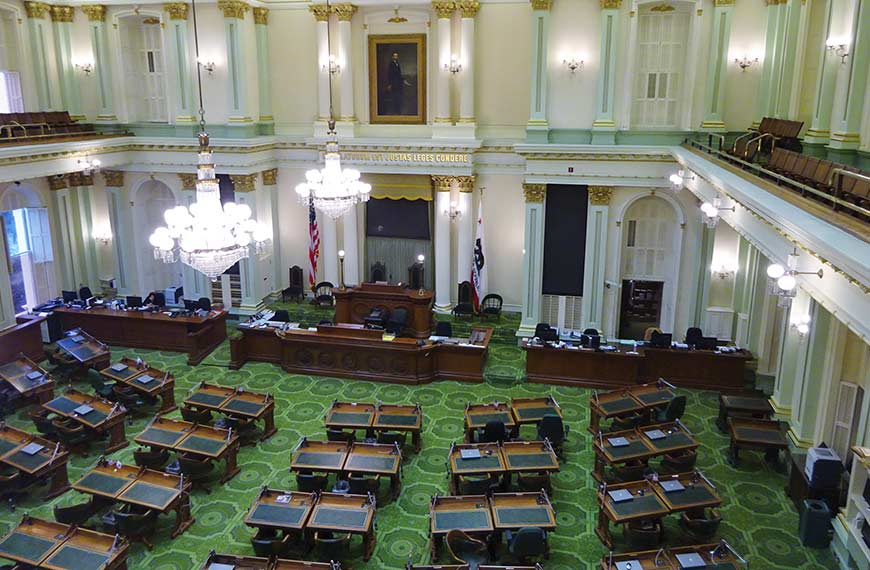 The Golden State’s building trades enjoyed a number of victories during the recent legislative session, moving laws that will create jobs and better the lives of members across the state.

Erin Lehane is legislative director at the State Building and Construction Trades Council of California (SBCTC). She said that since 2013, the state house has passed more than 60 bills that include skilled-and-trained workforce requirements. This past year was no different.

“Every time skilled-and-trained is put into a piece of legislation that’s signed by the governor, it creates corresponding opportunities for apprentices across the state of California,” Lehane said.

Housing was a legislative emphasis for the SBCTC during this past session, and it appears to have paid off. A major win came in the form of Senate Bill 6 (Anna Caballero, D-Merced), the Middle-Class Housing Act. This legislation allows for the creation of housing in existing commercial and retail spaces without rezoning and includes skilled-and-trained language to ensure union crews are on the jobsite.

The SBCTC was also successful in passing Senate Bill 886 (Scott Wiener, D-San Francisco), a by-right bill for student housing that, too, stipulates a skilled-and-trained workforce.

“Housing has certainly been a place where we have forged ahead aggressively because of the atrocities that occur in the residential construction sector,” Lehane said.

Assembly Bill 2011 (Buffy Wicks, D-Oakland), the Affordable Housing and High Road Jobs Act, also made it into law. It was sponsored by the Northern California Carpenters Union. AB 2011 accelerates production of housing along transit coordinators but did not include skilled-and-trained requirements and was opposed by the SBCTC and the SF Building Trades. A compromise was struck, however, that allowed both AB 2011 and SB 6 to pass.

The SBCTC also lobbied for a handful of energy bills that would benefit building trades workers.

Senate Bill 1291 (Bob Archuleta, D-Downey) expands zero-emission vehicle infrastructure permitting. It was supported by the SBCTC and also was signed into law.

“Certainly, [green energy] is a big part of what we’re doing,” Lehane said. “One of the priorities is housing, and another priority is looking at these new technologies as we meet the climate crisis in California, and ensuring our workforce is at the forefront of that.”

Also supported by the SBCTC and signed by the governor was Senate Bill 1295 (Monqiue Limon-D, Santa Barbara), which stipulated a skilled-and-trained workforce in dealing with abandoned oil wells.

Not all legislative victories come from the passage of bills the SBCTC supports. Some wins come as a result of defeating what Lehane characterizes as “mischief bills” — legislation that would be detrimental to tradesmembers if passed.

“We spend equal time killing bad bills as we do moving good bills ahead,” she said.

For example, the SBCTC beat back several attempts to hinder heavy highway funding, which would have had a direct negative effect on jobs.

Assembly Bill 1778 (Cristina Garcia, D-Bell Gardens), which would have prohibited California from funding or permitting freeway expansion in “environmental justice communities,” was held up in committee. Assembly Bill 2237 (Laura Friedman, D-Burbank), which would have prohibited using local sales tax measures for certain transportation projects, also died in the Senate. Assembly Bill 2438 (Friedman), would have required transportation funding programs to include strategies from the state’s Climate Action Plan for Transportation Infrastructure. Newsom vetoed it, deeming the legislation “unnecessary.”

“That’s another priority: to ensure that those heavy highway funds actually find their way to construction on California’s highways and freeways,” Lehane said.

War was also waged against bad energy policy. Senate Bill 1119 (Limon) would have hindered the ability to construct new power plants. The legislation was held in committee.

Lehane explained that the SBCTC is supportive of the clean energy initiatives — and the jobs they bring — but stressed that energy capacity must be increased now.

“This has gotten very much caught up in the whole climate conversation,” she said. “Before we can further electrify the state of California, we need additional power, and we certainly can’t afford to take power off the grid.”

Lehane and her team at the SBCTC are gearing up for the next legislative session. Despite a Democratic supermajority, the building trades will still have to push back against bills from allies.

Lehane also cautioned that 2023 will be different, as the state is facing a budget shortfall. The influx of federal money, including that from the Inflation Reduction Act, should help, she said.