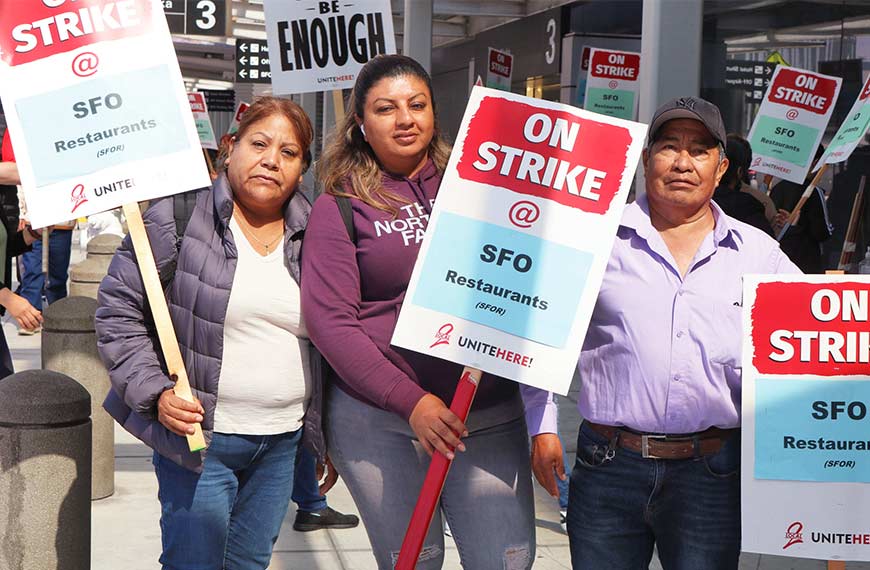 Local labor has been flexing its muscle in a big way lately, winning a number of strikes and getting some much-needed legislation passed in Sacramento. Here are some highlights.

California Senate Bill 490 — the Buy American Food Act — has been signed into law by Governor Gavin Newsom thanks to the hard work from Teamsters Local 856.

The legislation, drafted by State Senator Anna M. Caballero (D-Merced) and cosponsored by the Teamsters, mandates that public school lunch food is domestically sourced and supplied. More specifically, SB 490 “requires that all public institutions that receive federal reimbursement to provide prepared meals include in their bids and contracts that they will only purchase agricultural products grown, packed, or processed in the U.S., unless the imported product is 25% or more less than the domestic product,” according to a press release from Caballero’s office.

According to Local 856 Secretary-Treasurer Peter Finn, the passage of SB 490 is a win on multiple fronts. First, it fights outsourcing of middle-class jobs and keeps tax dollars stateside. Also, by purchasing processed food domestically, the bill helps guard against any supply chain issues that might delay shipment of, say, peaches from China. Additionally, the focus on domestic production helps ensure the enforcement of food safety standards.

“This is part of the larger fight of making sure that particularly when it comes to our public funds — our taxpayer dollars —we reinvest those here in our local communities,” Finn said.

A 10-week strike by the National Union of Healthcare Workers against Kaiser Permanente has resulted in major gains for union therapists employed by the healthcare giant.

The Kaiser-employed therapists represented by NUHW include psychologists, licensed clinical social workers, chemical dependency counselors, and marriage and family therapists. The four year-contract ratified by the membership is retroactive to September 2021.

A key provision in the new agreement includes increasing the amount of time therapists have to conduct initial assessments of children from 60 minutes to 90 minutes.

Another substantial win is that the contract provides tools for Kaiser to comply with a NUHW-sponsored law that requires all health insurers to provide therapy sessions within 10 business days of a patient’s appointment request (unless it’s determined that waiting longer would not be detrimental to the patient).

Currently, it can take weeks or even months for a therapist to see a patent. This was a major sticking point for NUHW members at Kaiser.

Remarkably, the therapists conceded nothing in their contract win.

“There’s such unanimity of support for each other and for their union,” said NUHW President Sal Roselli. “These clinicians are radicalized to achieve their long-term goal of really attaining mental health parity in this state and this country.”

Fast food workers at SFO represented by Unite Here Local 2 showed the power of their solidarity in winning a three-day strike at the airport.

Workers successfully negotiated a $5-per-hour raise, with $3 immediately and additional incremental raises to come by September 2024. The approximately 1,000 employees had not seen an increase in their wages since 2018, all the while serving up increasingly higher-priced airport food to weary travelers.

A less publicized but equally significant result of the strike was the organizing of a number restaurants that had opened up in recent years but avoided unionizing. Workers from seven outlets at SFO joined the strike and are now members of Local 2.

Union President Anand Singh added that additional outlets at the airport are currently working to organize.

“The struggle continues,” Singh said. “There’s still a number of non-union outlets that we’ve got to impress upon that they can’t operate in this city and at his airport and be anti-union.”

Members of SEIU United Service Workers West took the fight to the Meta contractor that hires the members who clean the tech goliath’s offices.

After a week-long strike, the contractor that handles Meta’s janitorial services, SBM Management, came to terms with SEIU after 120 members were let go in October. The agreement reached includes severance pay and healthcare for the laid-off workers.