Destructive, Dangerous Fires Burn Through City, Where Aging Buildings That Lack Sprinkler Systems Are All Around Us 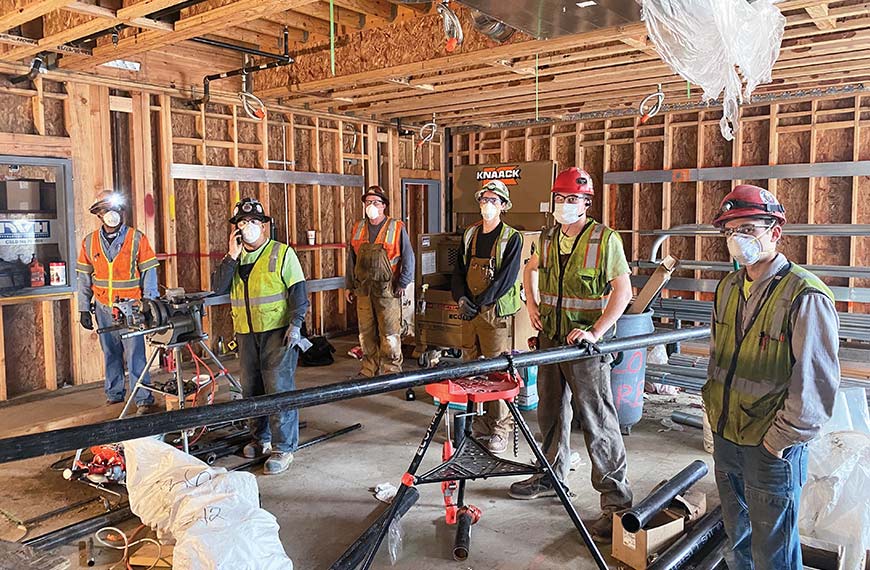 On Saturday, September 24, a fast-moving fire broke out at the historic and cherished Double Play Bar and Grill at 16th and Bryant streets on the eastern edge of the Mission District. Fortunately, no one was harmed, and the fire department’s quick response prevented the flames from spreading to the floors above. The Double Play, however, suffered complete destruction.

The restaurant, which was beloved by Giants fans and served as a gathering place for generations of local baseball aficionados, was located on the ground floor of a three-story Edwardian-style mixed-use building that was completed in 1909. It’s the type of structure that’s fairly commonplace around the City, and it’s a hazardous one.

The fact that the Double Play’s home was 113 years old means the restaurant likely never stood a chance against fire. Its destruction could’ve been prevented with a full fire-suppression retrofit, including a sprinkler system — and those folks living in the apartments above the restaurant would’ve slept soundly that night.

In a city with such a large number of aging structures lacking modern fire suppression systems, the death of the Double Play brings two concerning facts into focus:

The incidence of fires in San Francisco has increased exponentially in recent years, and lots of those fires have resulted in the total destruction of older buildings.

The rate of fires requiring response has exploded since the pandemic’s onset. There has been a 26% increase in SF between 2019 and 2020, with SoMa seeing a rise of over 70%, according to data compiled by SF news outlet Mission Local. In addition to the Double Play fire, there have been several greater-alarm fires on Divisadero, McAllister, and Haight streets in recent months.

Adam Wood, SF Fire Department Rescue Squad 2 firefighter and vice-president of SFFD Local 798, expects this year’s final tally to be at least as bad as last year’s in terms of total fires, with a potential greater share of large fires. He said outdoor fires associated with the City’s significant unhoused population have spiked over the past two and a half years and can often spread to buildings and automobiles.

“Most of the buildings where the outside fires tend to do the most collateral damage are older housing stock that don’t have modernized fire protection systems in them,” Wood confirmed.

Although all new construction does contain such fire safety systems, Wood said he hasn’t seen any significant movement on adding fire suppression to existing housing stock. The reason for that likely comes down to a simple fact: Building owners generally don’t want to spend the money on such upgrades because they can get expensive.

“You can’t put a price on life safety,” said Dan Torres, business agent at Sprinkler Fitters Local 483. “Although a lot of people always want to save money, fire sprinklers save lives, and that’s the bottom line. The more buildings that have fire protection, I think the less loss of life there’ll be — as long as the fire protection is installed correctly.”

Given the housing affordability crunch in the City, there’s been insistent focus lately on new housing creation, and for good reason. But despite all the time and energy being spent on making it easier to construct new residences, the reality remains that most of the City’s inhabitants live in older housing stock that lacks fire suppression systems — not to mention all of those who work, shop, eat, and drink in those buildings’ ground-floor establishments, or in dedicated commercial spaces that aren’t fitted with sprinkler systems, either.

Without modern fire suppression infrastructure, which is generally very effective at stopping blazes before they become conflagrations, the City’s old buildings are literal tinderboxes that stand ready to burn.

“The oldest housing is the least protected and in the most danger,” Wood said. “Concentrated in areas with older housing stock, a lot of the homeless population who are just trying to survive on the street need heat and electricity. It’s something that building owners should keep in mind when they’re weighing the cost of fire protection systems in their buildings.”

But the notion that building owners will voluntarily foot the bill for such upgrades in the absence of a public mandate to do so is wishful thinking.

Despite the stubborn issue, the City and state are both making strides toward fire safety in other ways. In 2016, the office of the State Fire Marshal began mandating that anyone who installs, alters, or repairs fire sprinkler systems hold a valid fire sprinkler fitter certification that’s renewed once every three years with proof of 30 hours of continuing education through a state-approved program.

SF has taken the requirements a step further: The City’s fire code mandates that anyone who conducts testing and maintenance of the systems must hold a valid fire sprinkler fitter certification.

“San Francisco has gone above and beyond the rest of the state,” Torres said. “All of our active members are required to maintain their state certification for employment. We’re leading the way.”

Torres estimated there are about 130 residential high-rises in the City that lack a fully operational fire sprinkler system. However, as of 2011, all new residential construction in California is required to have it. Currently, there is no mechanism to require that those 130 buildings be retrofitted with fire safety systems, but Torres said that the union still has considerable residential retrofit work underway.

“Of all the fires, any structure in San Francisco that currently doesn’t have a fire sprinkler system should consider putting one in — but it needs to be installed by certified fire sprinkler fitters.”