Game Plan for Proposed Bayview Development a Touchdown for All Involved 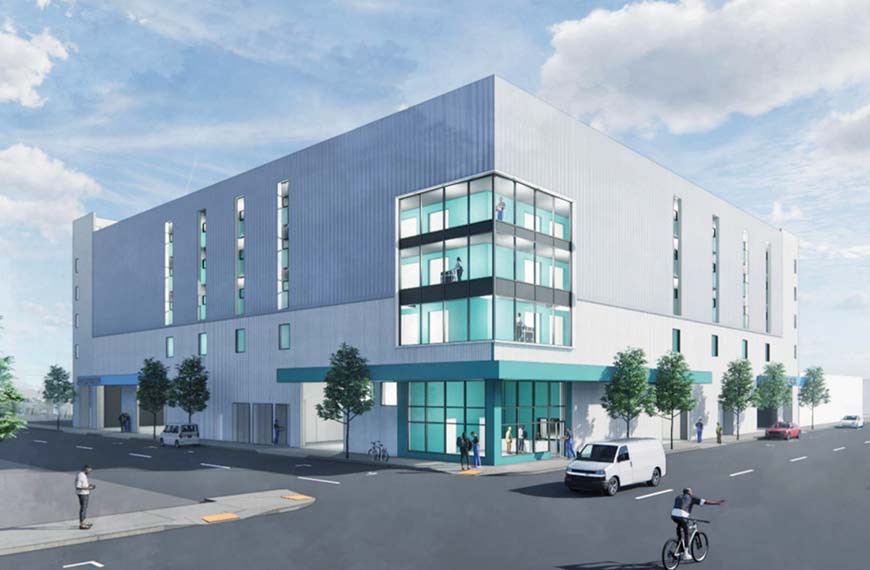 A proposed five-story self-storage facility and event space in the Bayview looks to be more than just another soulless redevelopment project with no concern for those around it. Uniquely, it aims to be a community outlet.

A special benefit from developer DECA that’s included in the design of the project at 2270 McKinnon Avenue will grant the Brown Bombers Youth Football and Cheer Program free storage space and use of the building’s event area. The benefit came about because DECA cofounder and managing director Daniel Sachs was eager to do something extra for the Bayview-Hunters Point community beyond basic economic redevelopment.

“As we got into this, we wanted to find a community partner to enable the project to be something that supports the community in more ways than the standard ones,” Sachs said.

The developer connected with the Brown Bombers earlier this year in discussions about how the new development could benefit the program. Sachs learned that the organization needed storage space for football gear as well as somewhere to meet, and the cheer team was in dire need of a practice space.

The 2270 McKinnon project labor agreement stipulates that the Bayview-based Brown Bombers will have use of ground-floor space in the new building as a dance studio, workout room, and/or a place for community gatherings, in addition to storage privileges.

Founded in 1999, the Brown Bombers’ goal is “is to teach the fundamentals of football and cheer while stressing the importance of academic achievement in an environment conductive to learning and sharing,” according to its website. The organization provides these opportunities for youth ages 5 to 15 and includes free football skills camps and cheer camps.

A Brown Bombers spokesperson was not available for comment by press time.

The PLA between DECA and the San Francisco Building and Construction Trades Council also calls for apprenticeship opportunities and a skilled-and-trained workforce — typical items on council-negotiated PLAs.

SF Building Trades Secretary-Treasurer Rudy Gonzalez said he was impressed with DECA’s approach to the project, applauding the developer for looking beyond base extraction of value from a land parcel but, instead, for going about the project “the right way.”

“I think it’s both strategic and the right thing to do for a developer to want to partner with people who have legitimate relationships in the community,” Gonzalez said. “A smart developer, a responsible developer, is going to do that work. I thought it was both strategic and refreshing that DECA was just like, ‘We want to do this high-road in every aspect.’”

Founded in 2014, San Francisco-based DECA currently has 4 million square feet of projects under development. Sachs said DECA’s investment in the neighborhood surrounding 2270 McKinnon is a way for the company to build relationships and demonstrate the firm’s long-term commitment to the Bayview.

“I think it’s important for us to be partners with our community,” he said.

The 2270 McKinnon project parcel, which sits at the corner of McKinnon and Upton streets, is currently an old taxicab yard. The new structure will replace an unsightly lot of jumbled cars with the new five-story, 174,400-square-foot structure, the majority of which will be dedicated to self-storage (150,000 square feet) while the remainder is designated for PDR use — that’s production, distribution, and repair, which is planning-speak for the space the Brown Bombers will be utilizing.

The project also proposes improvements to McKinnon and Upton, including sidewalks, street trees and curb cuts. While 2270 McKinnon is still working its way through the permitting process, it’s scheduled to go before the San Francisco Planning Commission on November 3.

Once it gains approval, Sachs estimates 16 to 18 months of construction time.