My Father, Fred Ross, Trained Cesar Chavez and Dolores Huerta to Organize. His Approach Can Help Us Win Today’s Fights. 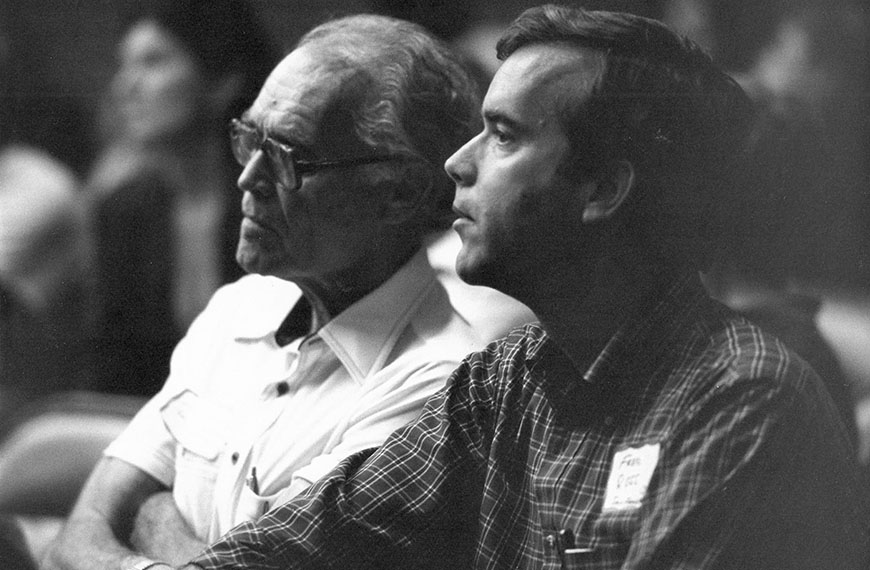 This column was written by Fred Ross Jr., son of labor organizer Fred Ross. After graduating from UC Berkeley in 1970, Ross Jr. joined the United Farm Workers and was trained and mentored by Chavez, Huerta, and his own father. He now lives in the Bay Area, where he has worked as a public defender, community organizer, political activist, and labor leader. He retired in February from his most recent role as organizer for IBEW Local 1245.

Check out the video to learn more about Fred Ross.

With another Father’s Day come and gone, I’ve found myself thinking recently on my dad, Fred Ross, and the extent to which he influenced both me and the world.

My father was born in 1910 in San Francisco and grew up in Los Angeles. He graduated from the University of Southern California in 1936 in the thick of the Great Depression. He took a job as a relief worker, which took him to California’s Central Valley. There, he helped to lift Dust Bowl refugees from their misery and desperation by helping them organize.

As the Depression era segued into World War II, my father went on to help Japanese Americans find jobs and housing upon their release from the internment camps. In the face of post-WWII Klan activity in California, he brought together civic unity leagues to crush the cowardly white supremacist presence. In the early 1950s, he trained and mentored Cesar Chavez and Dolores Huerta — along with countless other Mexican Americans and African Americans — to not only unionize but also to build their voting power and mount a challenge to school segregation that would eventually lead to the successful integration of local school boards across the Citrus Belt.

It was around this time, in 1947, that he and my mother, Frances, would welcome me into the world.

I spent my early childhood east of downtown L.A. in the hub of the Chicano movement, Boyle Heights. I learned to speak Spanish in a household that fought injustice and racial prejudice as a way of life; at the time, my father was blazing trails organizing in the barrios of Southern California, and my mother was doing pioneering work with the mentally ill.

In the summer of 1964, when I was 16, I traveled with my father to the small town of Guadalupe, AZ. He had been invited there to organize the Yaqui and Mexican American community. I spent a month accompanying him to house meetings and teaching basic English classes to help folks prepare for the American citizenship exam.

This was the first time that I saw my father in action. I observed how he trained new community leaders to register nearly 1,000 new voters, winning these newly enfranchised constituents recognition from previously indifferent elected officials. I felt enormously proud of him and was so impressed with what he was doing to help change the world for the better. I began to imagine becoming an organizer someday.

I joined the United Farm Workers in 1970. My father — along with Chavez and Huerta — trained me how to do house meetings and personal visits, how to recruit volunteers for picket lines, how to work with urgency and do follow-ups. What I learned with them would be absolutely formative for me.

My father was a tough taskmaster. One Saturday morning, I was supposed to be firing up a group of about 100 campaign volunteers, when I heard this very loud voice: “Animo, Fred, animo!”

My father’s message was timely and clear: Be courageous, and bring the fire.

He and I continued to work together throughout the ’70s, mostly on farm worker strikes and boycotts. After he retired in the ’80s, I brought him back to train a new generation of organizers for my own advocacy group, Neighbor to Neighbor, which I founded in support of the people of El Salvador.

Today in America, democracy is yet again under siege. Over recent years, we’ve witnessed widespread disinformation, racism, xenophobia, homophobia, voter suppression, and a violent attempt to overturn the results of a presidential election. Over recent weeks, we’ve seen the U.S. Supreme Court’s reversal of abortion rights, along with its threats to upend LGBTQ rights next.

As the liberties of large swaths of the American people are put on the line, the situation grows ever more precarious. Fundamental respect for individual freedom and the cohesion of the nation suddenly look to be at risk. These days, we need thoughtful action to combat these trends.

For instruction on how to affect such action, we’d be wise to look to the work of Fred Ross.

My father channeled anger and frustration into practical political movement. He showed people how to lay the foundation of member-led movements that could change institutions and enact policies that would improve lives. He mobilized people to challenge the status quo wherever the status quo was unjust. He taught people how to stand up to police brutality, to fight segregation, to organize voter registration and voter turnout campaigns, and more. He instilled courage.

He worked from the understanding that while protests can draw attention to create sustainable change, it is the hard work of political persistence and working-class organization that would build real power and give people a lasting say in the decisions that shape their living and working conditions. He was patient but always acted with a sense of urgency, and he instilled those qualities in those whom he mentored.

He listened more than he spoke. He made it about the people’s story, not his. That was the cornerstone of his version of thoughtful action.

My father once said, “An organizer is a leader who does not lead but gets behind the people and pushes.” He was not an egotistical man and couldn’t have given a damn whether his name was mentioned in the history books. Instead, he always remained focused on the larger goal: to empower as many people as possible with the skills and knowledge they’d need to form mass movements for their rights and freedoms — movements so persuasive in their genuine righteousness that they would ultimately be impossible to ignore, subvert, or suppress.

He helped people realize they had a voice and that they ought to be confident in raising it — and so should we all. If we take a page from Fred’s book, we might just be able to help people find their voices within the movement for expanded rights, worker unity, civil rights, and any other democratic undertaking we seek to promote.

My father understood that for democracy to exist, we must listen closely and then take informed, courageous action. If we all understand that, then we stand more than a fighting chance against the tyranny we’re facing today.