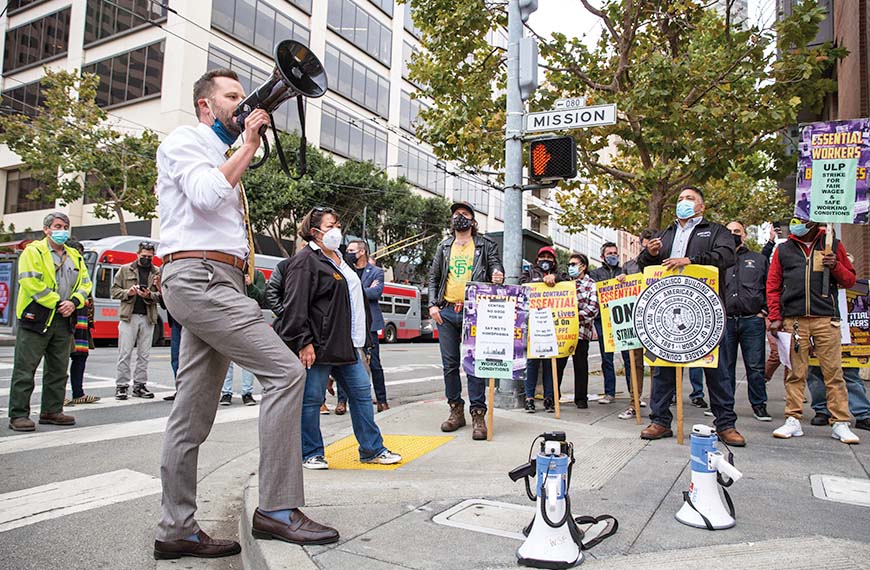 Each year, billions of dollars in wages are stolen from workers in California’s underground economy. Due to unique labor-standards compliance challenges and the often-transitory nature of work, the construction industry has the distinct dishonor of coming in second place for highest number of labor-standards violations. It is surpassed only by the restaurant industry.

Whereas union construction workers have recourse outside of the law to help them resolve wage issues — for instance, collective bargaining, grievance procedures, access to legal experts, ongoing relationships with contractors, and other remedies — their non-union counterparts usually do not. So, they frequently fall victim to wage theft schemes and face an uncertain battle to get their pay recovered, as the state lacks sufficient resources to enforce labor laws effectively.

“The No. 1 thing we see is that immigrants are being cheated out of some or all of their wages,” said Matthew Miller, senior field representative for labor compliance with the NorCal Carpenters Union, who estimated that 99% of the people he helps are immigrants, 80% of whom aren’t conversant in English. “So, you see a system that’s taking advantage of people who don’t necessarily understand the law or their rights. That leads to fair contractors not getting jobs and taxes not being paid to the state. It’s billions per year in taxes that the state’s missing out on and we as the public are also missing out on.”

Miller, who has worked in the field since 2007, said that issues haven’t improved and that even when workers win settlements, they don’t always recover the entirety of the wages that were stolen from them.

“These are the people who can least afford to go without a paycheck,” Miller said.

According to the state’s data, just about 2% of construction wage theft claims are collected. Ways to address this issue include bolstering enforcement resources, changing the collections process, and providing education to those entering the workforce.

Getting Out in Front of Wage Theft

Of course, another solution is to prevent the theft from occurring in the first place, and that’s what Haney’s wage theft ordinance intends to do. The proposal is set to be heard in the Land Use Committee in February.

“This legislation is designed to make sure that workers get paid what they’re owed, requires project owners to accept responsibility for the completeness of their contractors’ payroll records, and prevents the issuance of certification and final completion and occupancy until any outstanding labor violations have been resolved,” Haney said. “This is a simple but necessary fix to a loophole to ensure that project owners certify that workers have received legally required pay stubs. That protection for workers makes it more effective, if there is a violation, to go after the project owner and make sure people get paid.”

If passed, the legislation would essentially require property owners and contractors to maintain a labor compliance bond, which would be released for labor-standards compliance on any given project. San Francisco wouldn’t be the first city to establish such a law, but it’s the City’s existing strong labor protections that could give the law the teeth necessary to make a difference.

“We see over and over again how non-union contractors really use the exploitation of workers as a fundamental business strategy, undercut union contractors, profiteer, and hurt workers,” said San Francisco Electrical Construction Industry Director of Research and Advocacy Alex Lantsberg, who noted that property owners and contractors are currently required to provide more documentation on how construction waste is disposed of than on how its workers are paid. “This legislation asks developers to basically just put up a bond to ensure the workers are paid on the project. It creates an accountability and a responsibility mechanism to make sure that workers get paid if problems should arise in the project.”

How Legislation Can Help

Although the primary beneficiaries of the wage theft legislation would be non-union workers, union members also stand to gain because their employers will be competing on a more level playing field. Currently, fair contractors who don’t cheat their workers struggle to compete with bad actors who are underbidding them by using wage theft.

“Those wanting to participate in the underground economy and engage in wage theft have gotten very creative at doing so,” said Jesse Jiminez, executive director with Alameda-based wage-law advocacy nonprofit Foundation for Fair Contracting. “So, legislation like this is really long overdue. We’ve been in the front seat of combating this. It’s time for the developers and owners to really get involved and do their part in preventing wage theft.”

Some changes have already materialized on the state level. On January 1, AB 1023 took effect, requiring all contractors and subcontractors on public works projects to provide electronic payroll records or face penalties.

Dina Morsi, the executive director of Sacramento-based NorCal Construction Industry Compliance who helped draft the bill, said the requirement to submit electronic certified payroll records to the Department of Industrial Relations is a big deal because it provides wage transparency to the public and exposes potential underpayments and misclassification of workers.

Morsi said she has witnessed discrepancies in payroll records where employers intentionally misclassify workers in order to pay them at a lower rate. Now that they’re subject to penalties by the Division of Labor Standards Enforcement for failure to submit the records, there’s a mechanism in place to hold non-compliant contractors accountable.

The possible changes to San Francisco’s building code through the proposed Wage Theft Prevention Act should also provide greater accountability — not just for public works projects, but for everything built in the city.

“This legislation is an example of what is possible when an elected official engages with organized labor to create pro-worker policy,” said Charley Lavery, district representative with Operating Engineers Local 3. “Matt Haney is a champion for working families.”