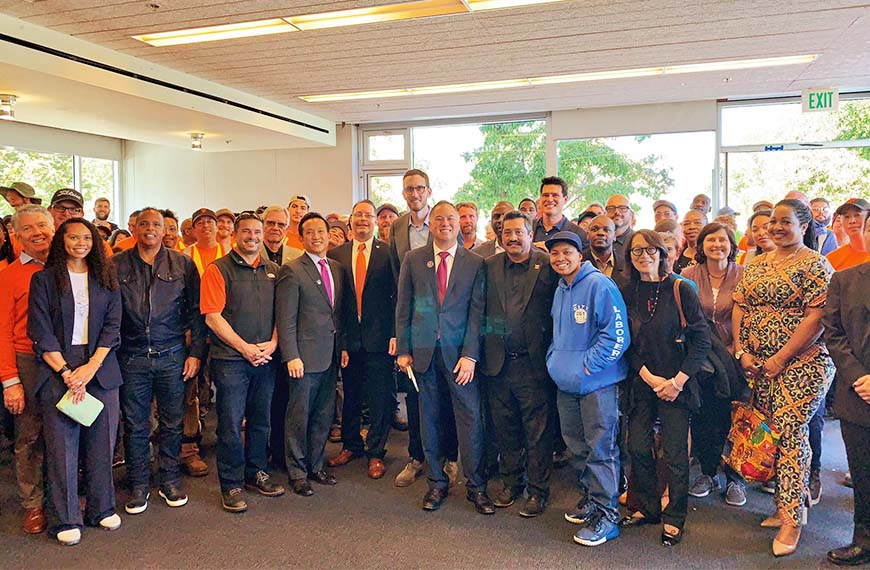 San Francisco City Attorney David Chiu, who is up for election on June 7, has been a consistent friend to labor throughout his political career. As a San Francisco County supervisor, he advocated for the creation of new construction jobs and more housing. During his time in Sacramento as a state assembly member representing the City, he allied himself with labor and voted accordingly.

Now, in his city attorney role, he’s back on his home turf in San Francisco, where he has turned his attention to the improvement of workplace conditions, worker treatment, and more.

“I prioritize worker protections, the preservation of job benefits, better treatment of immigrants in the construction industry, and the encouragement of green energy, including offshore wind production,” Chiu said. “Offshore wind energy will result in new jobs for union members.”

Chiu was appointed by Mayor London Breed in September 2021 and swore in as city attorney on November 1, 2021. One of the first meetings he took in his new role was with members of the San Francisco Labor Council.

“I asked for their feedback on multiple issues, including bad actors and COVID-19 safety,” Chiu said. “I invite feedback from members of locals. We also started an internal discussion within the Office of the City Attorney about worker protections.”

Chiu comes to the office after seven years in Sacramento representing District 17, which covers the City.

“As a state assembly member, I supported SB 1, the gas tax,” Chiu said. “I authored 75 laws that were signed by the governor. I am proud of my work with labor allies. I’m still in touch with my former state legislative colleagues.”

Chiu said his interest in supporting labor unions and immigrants comes from growing up a child of immigrants.

“After law school, I worked in public interest law and civil rights,” he said. “That’s how I first got to know the City’s labor community.”

Prior to serving in the California Assembly, Chiu was San Francisco District 3 supervisor between 2008 and 2014. For most of his tenure, he was president of the Board of Supervisors, a role that he first took on in January 2009.

Chiu said that when he served as D3 supervisor, he was the lead author for a number of major infrastructure bonds.

Chiu said the San Francisco Office of Labor Standards Enforcement’s November investigation of DoorDash is a step in the right direction. The inquiry resulted in a $5.3 million settlement. The funds will compensate approximately 4,500 workers who were the victims of labor law violations related to healthcare security and paid sick leave.

“There are so many labor concerns right now, it’s like drinking from a fire hose,” Chiu said. “Particularly coming out of the years of the Trump administration, it’s critical that workers are treated well. They should get the wages and benefits they are rightfully due.”

Chiu added he thinks it’s necessary that he and staff in the city attorney’s office understand how COVID safety protocols work in practice on construction sites.

“We need more housing and other construction projects to continue,” he said. “At the same time, we need to balance that with rules that protect building and trades workers from becoming infected. The Office of the City Attorney and I have been involved with that every step of the way. We want to continue that movement forward.”