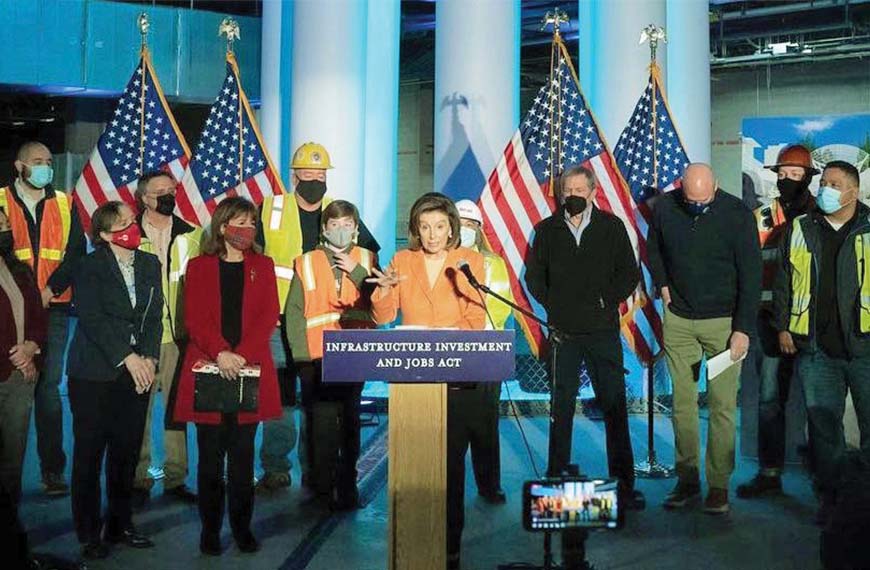 From High-Speed Rail to Retail Buildouts, Center Could Be Hub of City’s Post-COVID Comeback

Following six years of construction that began in 2012, the event highlighted the center’s key role in positioning San Francisco toward a full economic recovery from the pandemic. With businesses reopening, tenant improvement work is ahead for the transit center’s commercial spaces. That means jobs for building trades members covered under the original project labor agreement.

And thanks to a just-announced $4.5 billion federal allocation to Bay Area transit, part of the Biden administration’s big new infrastructure deal, Phase 2 is directly on the horizon. 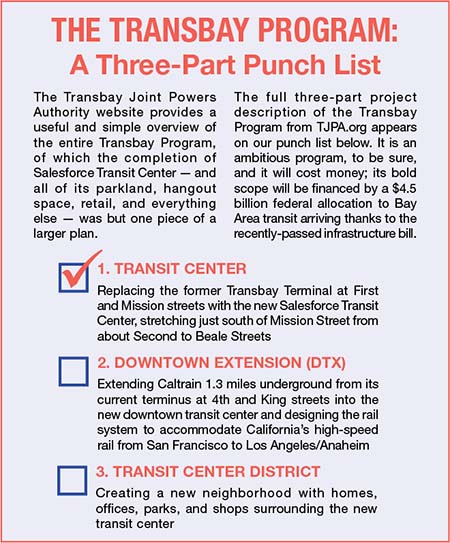 “[The work] symbolizes that San Francisco is still the place to be and that people still want to be here,” said San Francisco Building and Construction Trades Council Secretary-Treasurer Rudy Gonzalez. “The idea that all these tenants are improving and moving in and leasing space here, even on the heels of the pandemic, shows that they want to be here, and they know we’re going to have a great comeback in San Francisco.”

The transit center’s PLA was struck in 2011, back when the project was known as the Transbay Transit Center (Salesforce scored naming rights after signing a $100 million sponsorship deal in 2017). From the PLA’s signing, the SF Building Trades and the TJPA have worked in close partnership to create for the city a crown jewel of both style and substance, as the center provides vital transit connections within the region and beyond — and looks good doing it.

The tour covered the transit center’s 1,600-foot length: twice as long as the Ferry Building and longer than the Salesforce Tower is tall. TJPA Communications and Legislative Affairs Manager Lily Madjus Wu said the new transit center replaced the “dark and dreary” Transbay Terminal, which was built in 1939 on the same site and sustained damage during the 1989 Loma Prieta earthquake.

The final product, Gonzalez said, represents the best craftsmanship of all of the building trades unions.

The center’s bold design, topped by a 5.4-acre rooftop park, includes an amphitheater; gondola; vaulted entryway and gathering space known as the Grand Hall; 37-bay bus deck that connects to the freeway; and wellness and fitness spaces within the six-story structure. There’s also a state-of-the-art security operations center to help ensure the safety of all who travel through.

One of the many tradespeople who worked on building the transit center was Operating Engineers Local 3 Apprenticeship Coordinator Meg-Anne Pryor, who started on the project when she was an apprentice. She was along for the October 27 tour and enjoyed seeing the culmination of her handiwork. She said the job was particularly challenging for her trade, as it involved operating heavy equipment 60 feet below sea level on a hectic jobsite.

“It was an amazing experience,” Pryor said. “It’s nice to see it finally finished. Having been born and raised in the city, this is great for San Francisco, and it’s amazing to have a place like this to come to and bring family and friends.”

Sprinkler Fitters Local 483 Business Representative Dan Torres said the fire protection system supplied by union members is crucial in large infrastructure projects such as this because it can independently suppress or extinguish fires in areas difficult to access.

“The most challenging part of this job was access — being able to get in and out,” Torres said. “Coordination is huge when it comes to these projects because the areas are tight to work in, with only a few access points going in and out.”

Torres said he’s hoping work on Phase 2 will kick off soon to help get Local 483 members who were sidelined by the pandemic back to work. In addition, he said the transit center will help workers travel more easily to jobsites in the city.

With Phase 1 complete, the TJPA and the SF Building Trades again partnered to successfully advocate for federal funding. This round will deliver a subterranean high-speed-rail station and about 60,000 square feet of retail on the mezzanine level above the tracks. It’s all part of a larger master project the TJPA calls the Transbay Program.

Gonzalez said that with funding secured, Phase 2 should provide twice the work hours as Phase 1.

“We care about mobility and the economy, but we also care about climate and energy, and the idea that we can realize high-speed rail right here into the epicenter of San Francisco and connect it with all the intermodal transportation opportunities — that’s great for job seekers, that’s great for housing, and it’s great for the climate,” Gonzalez said.