‘A Ray of Hope’: Labor, Faith, Business Unite to Offer Gift of Music 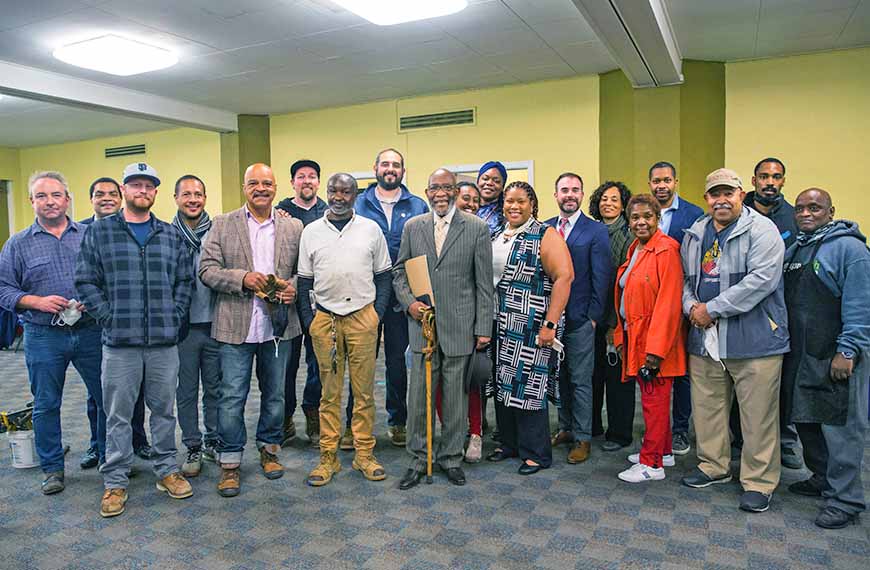 An Alliance Forms to Serve Local Youth, Shows How to Work Together for Good

San Francisco’s Third Baptist Church, in partnership with the Conservatory of Music, the SF Building Trades, Swinerton Builders, and Carpenters Local 22, have kicked off a community project to complete renovations and make improvements to the historic church’s music department at 1399 McAllister Street.

“Third Baptist Church is an official site of the San Francisco Conservatory of Music called the Charles A. Tindley Academy of Music,” said the church’s pastor, Dr. Amos C. Brown. “We’ve been in operation since the late ’80s serving youth. These young people are engaged in an excellent music education and cultural enrichment after-school program at a time when programs such as this one are so desperately needed.”

Following decades of service, the church’s facilities have worn down, necessitating improvements. Given that some SF Building Trades members are also members of the Third Baptist congregation and care deeply about their church and neighborhood, the Building Trades’ participation was a clear outcome. A crew of about 10 carpenters from Local 22 volunteered to install hardware and 20 doors that were donated by Swinerton.

The volunteers included Northern California Carpenters Regional Council Membership Outreach Representative Rachel Leanos and Local 22 retired members, working members, workers on the bench, and one member who was locked out of work during a strike.

“We appreciate all the members who volunteered their time because it’s a phenomenal cause, and we’re just proud we had the opportunity to help out,” said Local 22 Senior Agent Sean McGarry. “The Third Baptist Church is a pillar of the community.”

SF Building Trades Secretary-Treasurer Rudy Gonzalez said that tradespeople are honored to be part of an expression of love and unity, demonstrating the natural alignment between the faith and labor communities in the pursuit of economic justice.

According to Swinerton Community Relations Liaison Mick Penn, the firm has a longstanding relationship with Brown and has been able to leverage its position as a large contractor to provide pro bono project support.

“It aligns with how we see ourselves as a community builder, working however we can to improve the communities that we build in,” Penn said. “It’s an honor to be able to assist Third Baptist in this way and be able to impact the youth and support the musical training that they receive.”

In addition to installing new exterior doors for the building, the carpenters put in doors customized with viewing glass well-suited for a series of musical practice rooms that also facilitate social distancing during the pandemic. With phase 1 of the project wrapping up, District Council 16 Painters and Floor Coverers are expected to finish phase 2 in January. Phase 2 will be the latest in a series of church projects by Floor Coverers Local 12 apprentices as part of a program where they regularly apply their training through volunteering.

“This is really about our kids and our future,” Gonzalez said. “Here’s a group of young people who are going to see who is taking care of their church. Maybe one of them will get to meet a carpenter who lives in their neighborhood and gives them the idea that a career in the trades could be good for them. So, as we continue this community service work, we’re connecting people to opportunity.”

“I consider the union’s work to be an engagement of the people for the advancement of the community,” Brown said. “We have too much division in this nation. It becomes a ray of hope to see people reaching out to each other, and Swinerton’s donation is the corporate world showing that it is humane and engaged. It’s a dream-team effort to make things better, not bitter.”