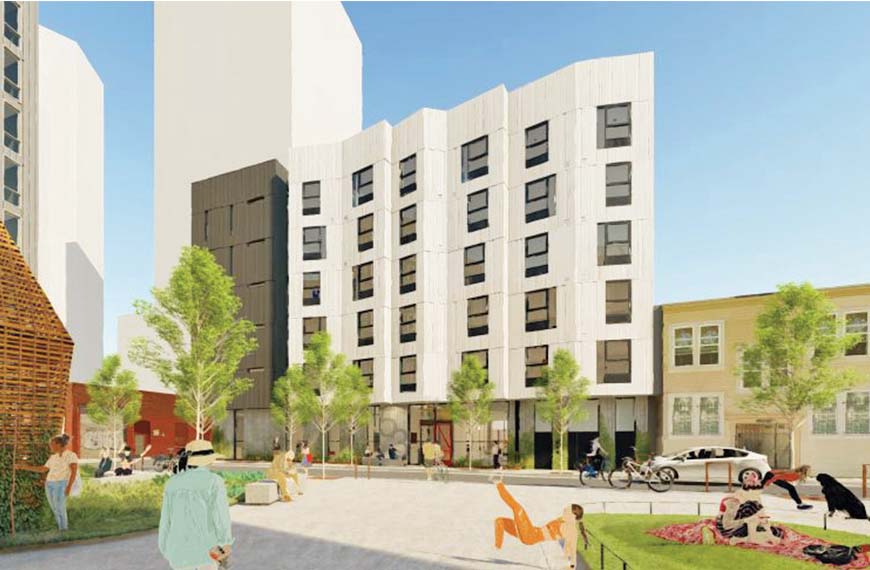 Work is progressing on the all-union project to house formerly homeless and low-income San Franciscans at 53 Colton Street.

The AFL-CIO Housing Investment Trust (HIT) is helping to finance the $52.5 million project near Mission and South Van Ness that will create 96 efficiency apartments and supportive services for previously homeless and extremely low-income residents. The project is part of a multi-phase redevelopment plan led by Plumbers and Pipefitters Local 38; it features a new union hall, a market-rate housing project, affordable housing, retail space, and a publicly accessible park.

Strada Investment Group and the nonprofit Community Housing Partnership are the developers on the project, which is designed to address acute homelessness in San Francisco — with 35 units to be reserved for previously homeless residents of the adjacent Civic Center Hotel, a historic single-room occupancy facility included in the area redevelopment plan. Another 61 units will be reserved for extremely low-income tenants.

“This is the first project building housing for formerly homeless people that HIT has financed in San Francisco,” said HIT’s Senior Managing Director Ted Chandler. “It shows the commitment of Plumbers Local 38 and all the San Francisco Building Trades to address the city’s affordable housing challenges through the investment of union pension funds.”

The HIT requires that work on their buildings is done with 100% union labor. That’s also a requirement of Local 38. Union signatory contractor Suffolk Construction is the general contractor for the project.

“I personally feel honored to be part of a construction project that will benefit people who do not have the means to do this on their own, and set them up for a change in their life from wherever they came from,” said Suffolk Project Executive Sven Van Der Sluis. “Since we are also doing the surrounding development — the three residential buildings with 444 units as well as the plumbers’ hall — we are changing the neighborhood with meaningful and long-lasting changes.”

In early September, the project was about 25% complete and on-schedule to be done by mid-June 2022. Crews were doing podium work and installing shear walls and concrete columns and working on framing on the first and second floors of the six-story building. Work began in January 2021.

The 53 Colton development was designed by David Baker Architects. The design includes an on-site resident supportive services suite, a community room, a community kitchen, a laundry room, and an outdoor courtyard. The building will be GreenPoint-rated, featuring sustainability measures such as a solar photovoltaic array on the rooftop, and all-electric appliances and systems instead of gas service to reduce greenhouse gas emissions.

At a groundbreaking event in March, San Francisco Mayor London Breed said, “As we begin to emerge from the COVID-19 pandemic, new investments like this in San Francisco are going to be critical to our economic recovery. […] By investing in housing, we not only create the homes our city needs, but we also create new, well-paying jobs that will help get our economy back on track.”

“The loss of construction jobs is one of the worst economic impacts that the pandemic is having on this great city,” said Chang Suh, chief executive officer of the HIT. “COVID-19 has put even more people at risk and in need of affordable housing.”

Local 38 Business Manager and SF Building Trades President Larry Mazzola Jr. noted that his union had a 30% unemployment rate due to the pandemic.

“This job has helped our members and other building trades union members who were out-of-work because of the pandemic,” Mazzola said. “It’s a big help to get the funding from the HIT — we appreciate their commitment to getting our members back to work. It’s a great project for the community and the city, and we’re proud to be revitalizing the Market Street neighborhood and helping homeless people with new housing.”

Community Housing Partnership (CHP) and San Francisco’s Department of Homelessness and Supportive Housing will provide services to tenants to help them deal with challenges and remain housed.

“Our organization’s mission is to create a permanent home for people who have experienced homelessness, which is the deepest consequence of the economic inequities unions work to overcome,” said CHP CEO Rick Aubry. “We are inspired, as a union shop, to be in solidarity with the AFL-CIO Housing Investment Trust through their investment.”

53 Colton is one of the first two projects in San Francisco, along with 99 Ocean, funded through HIT’s $1 billion Bay Area Investment Initiative. The HIT is investing $19.1 million in the new construction of 53 Colton and planning to invest $500 million in multifamily housing projects in the Bay Area over the next five years that will also leverage an additional $500 million from other sources.

53 Colton is the HIT’s 12th project in San Francisco, marking over $350 million in multifamily project commitments to date since 1984. The HIT estimates that the effort could create approximately 4,000 union construction jobs, 12,000 total jobs, and 4,000 housing units in the Bay by 2025.