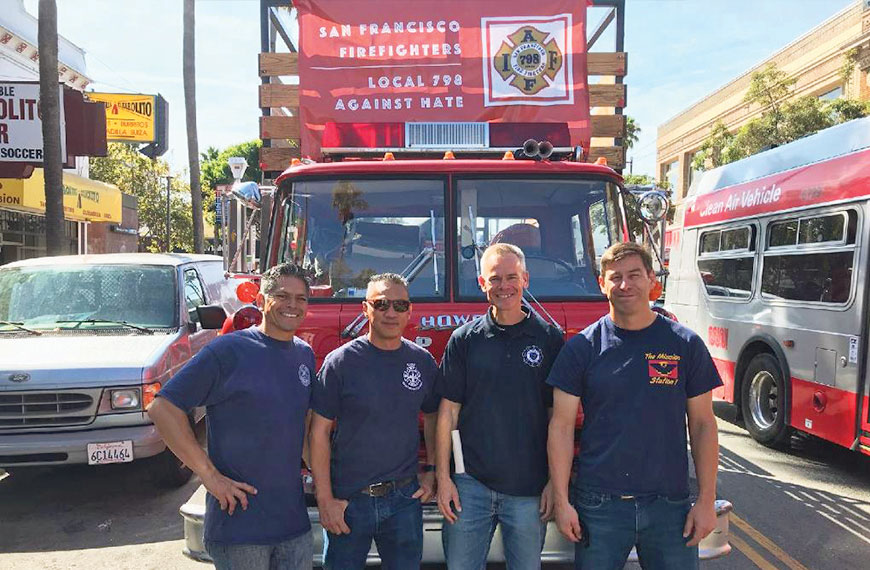 A building’s fire risk can be a looming, invisible threat until an ignition leads to a conflagration that claims lives and causes irreparable property damage.

Some may be surprised to learn that many of San Francisco’s aging residential high-rises lack any life-safety fire protection systems. Members of Sprinkler Fitters Local 483 are working to rectify this unsustainable situation.

“Unfortunately, there have been multiple fires in the city and county in residential high-rise and mid-rise buildings that have really brought this issue to light,” said Local 483 Business Manager Stan Smith.

The union is currently working with District 3 Supervisor Aaron Peskin and other Board of Supervisors members to consider crafting an ordinance requiring retrofitting of older buildings with sprinkler systems. Local 483 is also advocating for bolstering training needed for testing, inspection and maintenance of all life-safety fire protection systems in San Francisco.

Currently, San Francisco complies with a 2017 California law that mandates a certification for those who install fire-safety sprinkler systems. That law, however, doesn’t apply to testing, inspection, and maintenance of those systems. This poses a real risk, as installers often don’t have contact with a job after it’s complete, leaving systems in the hands of others, who might lack specialized training.

“If an inspector doesn’t have the most up-to-date education, they could be looking at things that have been modified or changed and not realize the effect they’re having on the system,” Smith said.

The American Society of Sanitary Engineers has a water-based fire protection systems inspection, testing, and maintenance certification program, which Local 483 is advocating be instated as a city regulation.

Adam Wood, a San Francisco Fire Department Rescue Squad 2 firefighter and union director of SFFD Local 798, said he has witnessed the dramatic distinction between fighting a fire in a building equipped with life-safety sprinkler systems versus one without.

“Sprinkler systems are the single biggest thing that can make a difference in a fire becoming limited to one tiny area of a building, or losing the entire building,” Wood said.

A spate of devastating fires in San Francisco’s single-room-occupancy buildings in the 1990s led to an ordinance, passed in 1998, that required SROs be equipped with sprinkler systems. However, the law glaringly left out the rest of the city’s residential buildings, which remain at risk today.

Before the SRO ordinance’s passage, Wood recalled an era when fires routinely broke out in such buildings, killing residents and injuring first responders who had to navigate narrow, smoke-filled hallways crowded with panicked people.

“We’ve seen it too many times — where a fire gets started and then it spreads, resulting in multiple deaths in what was a 100% preventable situation,” Smith said.

The legislation almost immediately improved the quality of life for people living in the Tenderloin and downtown, Wood said. Fires that erupt were easier to put out and posed less danger to firefighters.

Discussions with the city about the measure are in preliminary stages. Local 483 Business Agent Dan Torres participated in an initial February meeting on the topic, which included Supervisor Peskin, whose district has experienced fires in recent years that could have been prevented or mitigated by sprinklers. Torres said that while there’s been a show of support from the fire department, the cost of the work and potential disruption for existing residents are significant hurdles.

When it comes to a big spend, enthusiasm runs low, Torres said. “Everybody’s reluctant to do anything until they’re forced to.”

Yet, advancing the timeline for safety retrofits could be crucial, as Wood said the volume of fire-related 911 calls is currently on the rise as the economic recovery takes hold after having dropped last year during the pandemic-related shutdown.

Local 483 will fight to ensure that any retrofit legislation includes worker protection language.

“If this involves a tax incentive for property owners in San Francisco, then the people of San Francisco should have an opportunity to work in this area and be paid at the wages for this area,” Torres said.