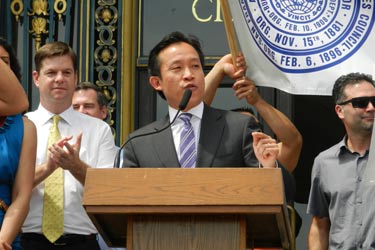 Supervisor David Chiu, speaking before a May Day rally at City Hall, is running for state Assembly. - Photo by Paul Burton

Why are you running for state Assembly and why should the people of the building trades pay attention to this race?
Six years ago when I ran for the San Francisco Board of Supervisors, city government was not as functional as it could be, and I worked hard to bring people together, including the building trades, to create tens of thousands of jobs and move forward with housing all over the city, to move our city forward. Today, in 2014, while we have come a long way in San Francisco, we still have many challenges, most notably around housing and affordability, and I want to continue to deliver results for San Francisco by going to Sacramento to continue to hammer out consensus and get things done for my city and for our state.

You talk about affordable housing projects in San Francisco. Why are those types of developments important?
San Francisco is the densest city on the West Coast and we’re in the midst of an affordability housing crisis and we are in desperate need of more housing at all economic levels. I’ve worked closely with the building trades in recent years to move forward with tens of thousands of units of housing against opposition, including my opponent in this race. We need to continue to build more housing, public housing, low income affordable housing, workforce housing and housing to meet the needs of San Francisco into the 21st century.

In what ways do you differ from your opponent and how are you the better fit for State Assembly?
First, I have had as a top priority creating more jobs and building more housing. So, as the decisive vote for important projects like the Hunters Point Shipyard redevelopment project and Park Merced, which will collectively create close to 20,000 units of housing and thousands of critical jobs, these are important projects to put our residents to work and build the future of our city.

I also have led in championing our city’s infrastructure. Which includes rebuilding neighborhood fire stations and police stations, upgrading our underground auxiliary water system, building a new public safety building, championing the Central Subway, development along the waterfront including our new cruise ship terminal and Exploratorium; all projects that are building a 21st century San Francisco and creating jobs at the same time.

And I fundamentally believe that the State of California needs to invest more in our state’s infrastructure, whether it be our roads, hospitals, public buildings, transportation, schools, libraries and parks. And I want to fight for more resources to continue to build the future of our state.

All in all, why would you say you are the right choice for labor?
My leadership style has been around bringing people together to deliver results, creating jobs, building housing, investing in infrastructure. My record over the last six years as the president of the San Francisco Board of Supervisors has been doing exactly that and stands in sharp contrast to what my opponent has not been doing.

And this is a critical race for the building trades, who have understood this, who I have worked in close partnership with and who I look forward to working closely with if I am honored to be the next assemblyman representing eastern San Francisco.