Phase 1 of Construction Digs in at Mission Rock Development 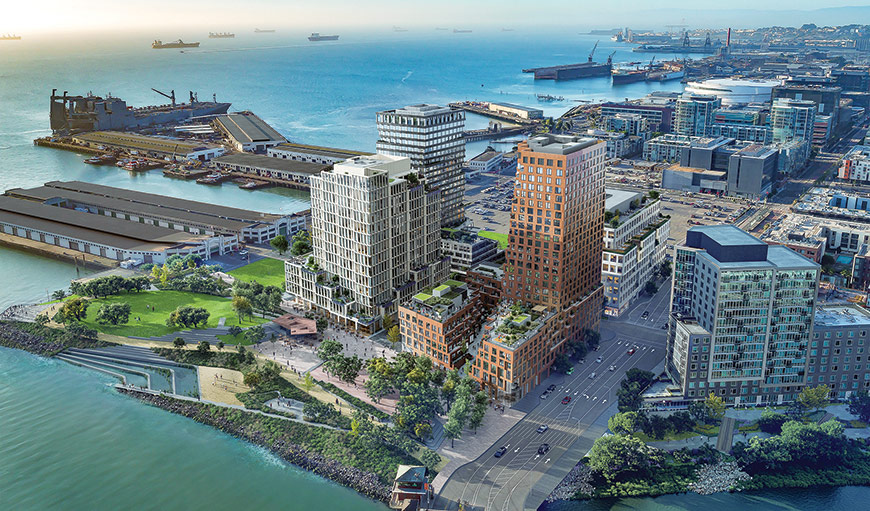 Spring 2019 graduates of the CityBuild Academy wait to be called up for their diplomas. - Photo credit: Chase Center

As of early this month, approximately one-quarter of the 28-acre Mission Rock site has had piles driven for structure foundations. Members of Pile Drivers Local 34, a subcraft of the Northern California Carpenters Regional Council (NCCRC), began the effort in early February. They will continue pile-driving through mid-April.

“The fairly mild winter helped,” said Chris Moyer, Senior Field Representative for Local 34. “Pile-driving can be impacted if there’s really wet weather. Operators must take precautions to protect cranes. You have to watch the stability of the soil supporting the rig.”

Later, over the course of four phases of development, construction workers will pour concrete, engage in metal stud framing, and install drywall. The rise of multiple residential and commercial towers will create work for hundreds. There are expected to be many work opportunities for members of Local 22 over the life of the project. Mission Rock is to wrap in 2024.

Timothy Reyff, a field representative of Carpenters Local 22, said the buildings range from an 8-story office tower on Parcel B to a 23-story residential tower on Parcel A.

“The first structure slated is a 13-story commercial building on Parcel G,” he said. “That will start in April 2021. One of the last structures slated is a 24-story residential tower on Parcel F.”

How Union Members Are Reducing Risk

Pile-driving involves relatively small crews doing work in the open. This puts workers at a lower risk of contracting the coronavirus. Vertical work typically involves larger groups of people working closer to one another.

“During the pandemic, there are typically only four people allowed on a manlift: an operator and three passengers,” he said. “That may not be possible [later due to heightened safety protocols to prevent the spread of COVID-19].”

Moyer said Local 34 members are currently making sure they are working with large cranes and heavy loads carefully.

Their task of driving piles into the ground is necessary to support and stabilize the foundations of heavy structures. Every pile has to be picked up and lofted vertically. The term “lofting” means to raise a pile into leads to place it under a pile-driving hammer.

“Lofting can be dangerous because the piles are heavy and very large — up to 90 feet on this project,” Moyer said. “If anything falls, it falls far and hard.”

Moyer said the pile-driving hammer is basically an inverted, single-cylinder, two-stroke diesel engine. Since it’s large and heavy, handling it can be risky.

Pile driving is also dangerous because crews work in unimproved areas. “We’re one of the first crafts on site,” Moyer said. “This means we frequently work around dirt, rocks, and other slipping and tripping hazards.”

A Partnership Between NCCRC, General Contractors, and the SF Giants

When the pandemic began, traffic decreased. This has made it easier to get into the neighborhood and complete work. Traffic has gone up slightly since the city moved into the red tier. Yet, overall, pressure has been eased on the underground utility work currently occurring on Third Street.

Reyff said NCCRC’s collaboration with its contractor base builds on a long-standing relationship that resulted in the construction of Oracle Park.

Fran Weld, Senior Vice President of Development and Strategy for the San Francisco Giants, said the organization is delighted to have been able to break ground during a challenging time.

“Now more than ever, the thousands of union jobs at this site will be critical to San Francisco’s post-pandemic recovery,” Weld said. “Mission Rock is proud to partner with the building trades to deliver this inspiring new neighborhood together for our city.”

Reyff agreed, saying that the Giants are a great partner.

“They’re creating more housing, office space, and a huge park, and will put many of our members to work. It’s a win-win,” he said.