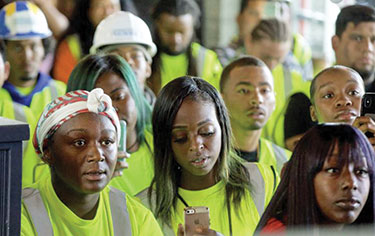 Spring 2019 graduates of the CityBuild Academy wait to be called up for their diplomas. - Photo credit: Chase Center

San Francisco Locals Continue to Support Women Through the Pandemic

Over the past 50 years, San Francisco construction unions have been improving how they recruit, train, and listen to women. As a result, more women are showing an interest in the trades, despite the COVID-19 pandemic.

“It’s become easier to convince women they can be successful in the organized trades. The key is letting them know they can do it and should consider it as a career,” said IBEW 6 Business Representative and Compliance Officer Sabrina Hernandez.

She said giving women a space to gather is key. Places where women can share and receive advice include women-centered recruitment events; sisterhood chapter meetings; Zoom organization meetings for women; and local, state, and national conferences on women in the trades, including the Tradeswomen Build Nations Conference, a joint effort between North America’s Building Trades Unions’ Tradeswomen’s Committee and Apprenticeship and Training Committee.

“With outreach, women have someone to talk to and a safe space to come in by invitation,” Hernandez said. “If a woman doesn’t grow up with or know someone in a construction union, it can be hard for them to see themselves in the job.”

“It’s getting better, slowly and with women already in the trades helping,” she said. “I tell women who are interested not to let anything or anyone derail them.”

Impacts of the COVID-19 Pandemic

Almost 2.4 million women have left the workforce since February 2020, in comparison with fewer than 1.8 million men, according to the U.S. Bureau of Labor Statistics. Women also make up over half of the 7 million people who are out of the workforce and want to work.

Women in the trades left jobs for the same reasons as women in other industries. They’re caring for children who are distance learning. They’ve become caretakers of partners or family members who contracted the coronavirus. They’re concerned about the high rate of transmission of the virus in the construction industry.

Women also left for industry-specific reasons, such as the cancellation of certain projects of commercial property and concerns regarding early working hours.

“It’s not easy to find child care for school-aged children to fit construction hours. Then there is the challenge of finding childcare that receives children as early as 6 a.m.,” said Michelle Leonard-Bell, General Manager of Mission Hiring Hall (MHH).

Candidates have also faced the obstacle of tests for entry not being held during the pandemic. Many in-person trainings have been canceled as well.

Atkins said construction offers advantages that offset some of the concerns. The trades pay a higher hourly wage than other sectors and allow for more career advancement. Construction is an essential industry, and one that has not experienced significant slowdowns or layoffs. In addition, unions offer excellent retirement options, including pensions, and good benefits.

MHH General Manager Leonard-Bell said the unique conditions of the pandemic appear to have led to more women to apply to the current CityBuild Academy cycle.

“In the current academy class of 49, there are eight women,” she said. “The number is usually four or less. We are thrilled. We would still like to see the number of women in the academy increase.”

The Power of Visibility, Promotion, and Motherhood

Making women in the trades more visible is one way to promote inclusivity, said John Kaloyeros, instructor for UA Local 38.

“We have recruitment posters at the Giants stadium that show women doing the work,” he said. “We let everyone know we’re equal-opportunity employers.”

Kaloyeros said it is also helpful for instructors and foremen to recommend women for positions.

Julie Salinas, president of the San Francisco chapter of the National Association of Women in Construction (NAWIC) and assistant project manager of Brayer Electric, said it has been helpful to establish a national Women in Construction week. She has also found it beneficial for organizations to reach out to women, parents, and others to educate people about the value of a career in construction.

Sue Doro, a retired machinist and editor of Pride and a Paycheck, a newsletter for tradeswomen and their supporters, said companies must commit more energy, resources, and training to recruit women.

“Many companies have a problem communicating with women,” she said. “Sometimes they do it half-heartedly, just to look good.”

IBEW 6’s Sabrina Hernandez said encouraging women to speak up is a critical component of making sure the workplace is safe.

“When a woman feels fine speaking her mind is when she can talk about having a safe and comfortable place on a worksite to pump breast milk. She won’t have to worry about falling off a ladder because she’s in pain,” Hernandez said.

Programs like the CityBuild Women’s Mentorship Program and groups like the Golden Gate Women’s Committee of IBEW 6 make it possible for women to support one another, she said.

“Health, safety, and excellence are not just important to women,” Hernandez said. “Those things are important to all of us. It’s exciting to see women gaining more of a foothold in the industry. It’s about time.”