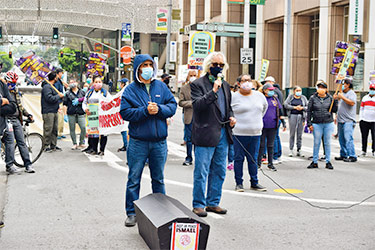 SFBCTC Secretary-Treasurer Tim Paulson spoke at an October 2020 rally and was among those arrested in support of SEIU Local 87 Janitors.

This fall SFBCTC Secretary-Treasurer Tim Paulson announced his retirement that’s set to officially begin on January 1, 2021, though he’ll remain active working as a consultant for the Building Trades and other labor groups. Paulson became an SFBCTC officer in August of 2018, after a 14-year tenure as executive director of the San Francisco Labor Council.

During his time as secretary-treasurer, he made great strides on behalf of the Building Trades advocating for legislation that benefits workers and leading negotiations on several project labor agreements for major developments in the city including the historic Citywide PLA, Potrero Power Station, City College and numerous other commitments securing all-union construction. In 2019, he was appointed by Mayor London Breed as a commissioner on the San Francisco Public Utilities Commission, providing oversight for water, sewer and electrical infrastructure operations, and he plans to continue his public service.

Paulson’s history with the Building Trades spans many decades. He has been a Journeyman Tilesetter since 1981, was an officer and business agent for the Bricklayers, Tilesetters, and Allied Craftworkers Local 3, as well as an apprenticeship coordinator for the Northern California Tilesetters and Tile Finishers Joint Apprenticeship and Training Committee. Beginning in 1997, Paulson served as vice president of the SFBCTC.

As the head of the SFLC, Paulson was instrumental in securing an agreement that ensures a high level of affordable housing for the Hunters Point Shipyard development. His tireless advocacy for workers long pre-dated his work in San Francisco. Paulson had previously held the titles of political director and assistant executive officer for the San Mateo County Central Labor Council where he assisted with the creation of the San Francisco International Airport’s Quality Standards Program that secured good wages and benefits for airline employees. As the organizing and political director of the Service Employees International Union, he spearheaded the Justice for Janitors campaigns as well as campaigns to organize office building security guards in the Bay Area.

While his efforts to bolster the progress of working people will likely never cease, Paulson leaves a legacy of fierce tenacity and perseverance at the bargaining table. For the past year he has modeled steadfast leadership during the unprecedented economic uncertainty brought on by the COVID-19 pandemic, and has never faltered in emphasizing the need for added safety precautions while staying focused on keeping jobsites up and running. His daily doses of humor and conversational wit will be missed by the many members of the Building Trades who worked with him on the common goal of securing good futures for tradespeople.