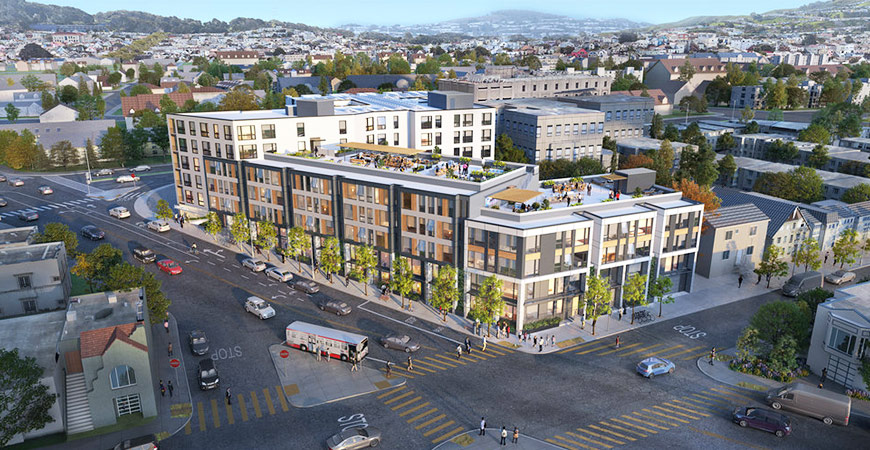 Groundbreaking for 99 Ocean Avenue expected this fall. The project will supply 193 housing units including 48 below-market-rate as well as about 500 union construction jobs.

$1B Initiative Will Help Soften the Blow to Housing and Jobs

The AFL-CIO has announced a $1 billion initiative to generate jobs and rental housing in the Bay Area over the next five years. The Housing Investment Trust was created as a response to the economic stress caused by the COVID-19 pandemic. The money will be used to invest in rental housing construction including affordable units for low income residents and to finance permanent housing for individuals experiencing homelessness. It will also assist labor organizations with developing workforce housing, boosting the use of union construction labor on these projects, providing pathways for local residents to enter Building Trades apprenticeship programs and investing in affordable housing.

“Early this year the real estate investment economy came to a screeching halt with COVID, quite literally with a lockdown on construction in the city and in the six county area,” said Ted Chandler, managing director of regional operations, AFL-CIO. “We’ve always considered ourselves the financial first responders. When the banks and Wall Street pull out, we go in to keep people working, to keep affordable housing being built, and the pandemic just made it even more clear that we needed to make this kind of commitment, a very public commitment, not just increase what we were doing but to have a plan around it and be deliberate about our commitments to affordable housing, construction, workforce housing construction, as well as supporting the overall rental market.”

The Housing Investment Trust is the latest example of the AFL-CIO putting resources into the region. According to Chandler, the organization has been investing millions of dollars in San Francisco for more than 25 years.

“We get a lot of support from the Building Trades and Labor more generally in the Bay Area, and it’s always been a very important market for us,” he said. “With the extreme affordability crisis in the city, we recognized that we wanted to do more.”

Over the past year, AFL-CIO leaders held a series of roundtable meetings with Labor leaders and public officials to learn about ways to stimulate affordable workforce housing development as well as market rate rental housing development in the region. The focus of those conversations wasn’t merely the “bricks and sticks” of the buildings but also on who’s building them and ensuring that solid career opportunities in the Building Trades are generated for Bay Area residents.

SFBCTC Secretary-Treasurer Tim Paulson said that he’s very pleased that the union pension fund money is coming through, especially given that other sources of capital financing have evaporated this year.

“Our pension funds like to invest in real jobs and real housing, not just Wall Street dividends and bottom-line profits,” Paulson told the San Francisco Chronicle. “Jobs and housing — that is kind of the one-two punch of what we all care about right now.”

“The AFL-CIO has stood up and said they’re going to invest in San Francisco because it’s a union stronghold and it’s a good place to invest,” added Larry Mazzola Jr., SFBCTC president. “They stepped up and we appreciate it because there’s no one else that’s doing what they’re doing right now. Because of this investment, they’re going to keep some projects rolling and workers working.”

AFL-CIO leaders are working with partners in the region to identify projects that are good investments for the pension fund capital. Since their announcement about the fund in September, there has been a lot of interest from developers who understand that proposals promising a highly skilled workforce and career opportunities are more appealing during the planning approval process.

So far at least two San Francisco projects have been earmarked to potentially receive money from the fund provided that they pass the permitting process. The 99 Ocean Avenue residential project, approved last year, is slated to deliver 193 residential units to the Excelsior neighborhood beginning this fall. A pre-job meeting was held with general contractor Roberts-Obayashi to discuss the union signatory contractors.

The second project is a 96-unit apartment building for formerly homeless adults at 53 Colton Street. That project is the affordable housing component of the new Plumbers Local 38 union hall on Market Street. To receive Housing Investment Trust funding, any project would have to commit to using all union signatory contractors.

“I think that very soon we’re going to have news about how union pension capital is creating housing for the workforce in San Francisco, housing that’s affordable to working people in the city and also helping to address the city’s homeless problem and build housing for homeless people along with services,” said Chandler. “Those are the two highest priority areas and I’m very confident that we’ll have some good news to share shortly about that.”

Chandler also acknowledged efforts by SFBCTC and San Francisco Labor Council leadership to help navigate the San Francisco landscape and pull the investment fund together. “They have really been our guides in how to have an impact,” he said.