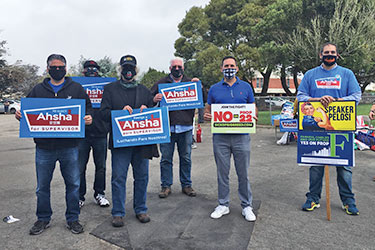 Viewed by many as the most important election in modern history, the stakes for the future of the Labor community are set high for November 3. For San Francisco’s Building Trades, the key to securing good union jobs comes in the form of backing elected officials at the local, state and national levels who support working people. Just as important is supporting ballot measures both locally and statewide that have the best interest in working people in mind and help secure construction jobs for years to come.

As it’s become increasingly clear over the past four years that the Trump Administration does not care about the priorities of working people in this country, the Building Trades Council has backed Joe Biden to become our next President and Kamala Harris to become our next Vice President as their track record’s promise the restoration of middle class economic values and worker protections to benefit American families.

State Ballot Measures
No on 22
The SFBCTC is advocating for a ‘No’ vote on Prop 22. The measure was written by Uber, Lyft, Instacart and DoorDash in an attempt to exempt those companies from providing protections to their workers. Instead they want to continue misclassifying so–called “gig” workers, denying them paid sick leave, workers compensation and unemployment benefits.

Yes on 15
The Building Trades Council is promoting a ‘Yes’ vote on Prop 15, that if passed would raise business taxes by using market value instead of purchase price as a benchmark for setting property taxes paid by commercial property owners, not residents. The money would go toward local governments and schools.