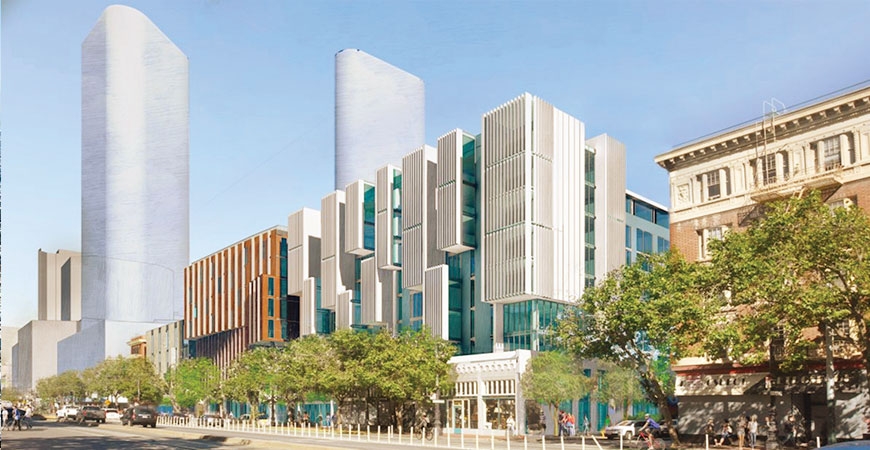 In July, Local 38 Plumbers & Pipefitters broke ground on a new headquarters and development at 1629 Market Street.

This July, Local 38 Plumbers & Pipefitters broke ground on a new development at 1629 Market Street that will span several blocks, invigorating the area with a mix of uses. The project will not only supply a new union hall, but also house the Local 38 headquarters and deliver desperately needed housing to the area. The Local’s current hall at 1621 Market Street has served as a beacon for union building trades workers over the decades, beginning in 1947.

According to Larry Mazzola Jr., Local 38 Business Manager and SFBCTC President, his grandfather, Joe Mazzola who was the chairman of Local 38’s Board of Trustees, had led the purchase of several land parcels on that block of Market Street. The existing union hall is owned by Local 38, and the union’s pension fund owns the land and other buildings. The new project aimed at renewing the site is the culmination of a seven-year process. Strada Investment Group is the developer and Suffolk Construction is the general contractor.

“This union hall has become a staple of politics in the city for decades,” said Mazzola Jr. “It’s centrally located, close to City Hall and downtown, and there aren’t a lot of other union halls left in the city, so keeping it here was important.” The project is going to create 1,800 jobs and provide a 33,000 square foot publicly accessible park.”

In addition to a new 30,000 square foot union hall, the development will include 500 units of housing and another 100 units of affordable, supportive housing for individuals who have experienced homelessness. There will also be 17,000 square feet of neighborhood-serving retail and a 33,000 square foot public park that will receive no City funding for development. Local 38 and Strada will allow the City to utilize the existing Civic Center Hotel as a navigation center on the privately-owned property until the affordable units are ready for occupancy. The project is exected to create 1,800 jobs.

“This provides 500 units of desperately needed housing and another hundred units of affordable housing that’s also desperately needed,” said Mazzola Jr. “This is a great job for the community and for the city, especially during these times in the pandemic where most jobs are on hold. So we’re happy that we’re able to get this project off the ground and get some jobs for building trades members who are out of work right now.”

The first phase of work will include the new union hall and first market-rate building, followed by the supportive housing residences located at 53 Colton Street and then two additional market-rate buildings. The final phase of the project will be a renovation of the Civic Center Hotel. The construction period is expected to last about three to four years, though the first phase should wrap up within the next two years.

“Local 38 has been fighting very hard to keep the union hall and headquarters in San Francisco as well as supply much needed housing to the city, and now it’s coming to fruition,” said Tim Paulson, SFBCTC secretary-treasurer. “It’s a win-win for members, Local 38 and the broader community, and we at the Building Trades Council are delighted. I believe it’s a model for what people should do with the property that they’ve had in their possession in this very expensive town.”