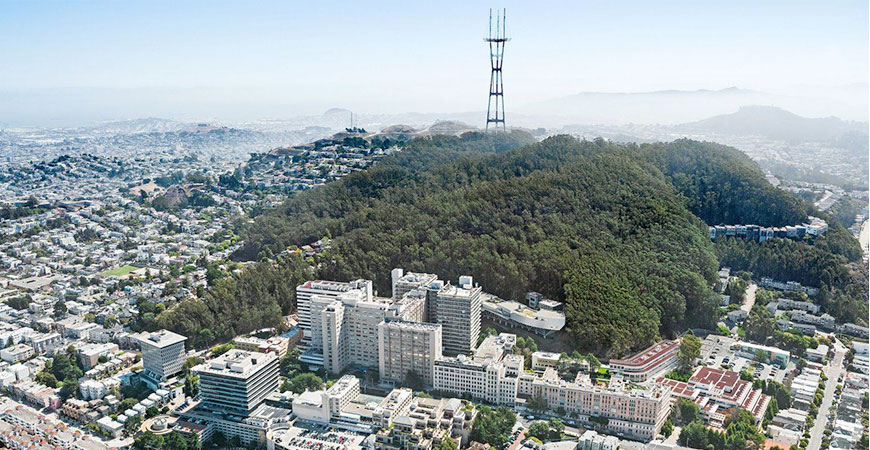 Plans are in the works for a $3.8 billion development to build the Helen Diller Medical Center at UCSF Parnassus Heights campus.

As many of its Parnassus Heights campus buildings deteriorate, UCSF is seeking to undertake significant upgrades to bring patient care facilities up to California’s current seismic standards. In particular, UCSF’s Moffitt Hospital that was built in 1955 is in severe need of renovation and, along with the Long Hospital lacks the number of hospital beds necessary to meet the community’s needs. The University has a $3.8 billion plan to build the Helen Diller Medical Center to serve both a growing and aging population.

A joint team of general contractors, Herrero Builders and The Boldt Company that built the California Pacific Medical Center Van Ness and Geary Campus hospital project will be tasked with constructing the new hospital at Parnassus along with Webcor Construction. The project is expected to result in about 1,500 construction jobs over a ten-year period.

“We had a meeting with UCSF last week and it went very well,” said Paulson. “We are feeling very positive that we’ll reach an agreement on all the terms that we normally argue over. So far they’re on board with the premise of our project labor agreement to ensure good union jobs for this project.” He added that another early October meeting had been scheduled and expects a PLA to be finalized quickly.

The new hospital, to be designed by architects Herzog & de Meuron and HDR, is envisioned to be integrated into the adjacent Mount Sutro Open Space Reserve to achieve a patient approach centered on healing, wellness and recovery. Expected to open in 2030, the Helen Diller Medical Center, is geared to fill the rising demand for medical care. UCSF representatives have stated that, in recent years, the existing hospitals at Parnassus Heights have had to turn away nearly 3,000 patients annually due to a lack of space.

Despite this, the demand is expected to continue to increase. With the Bay Area’s population projected to add an additional 750,000 people in the next decade coupled and with an aging population of Medicare recipients, the region will need many more hospital beds. Currently UCSF provides 39 percent more inpatient care for Medi-Cal patients than any other hospital in San Francisco. The new facility at Parnassus will replace the existing inpatient care provided at Moffitt hospital and enable UCSF to increase patient capacity with 200 more beds.

“UCSF’s role in the health care landscape has become increasingly pivotal over the decades,” said Mark R. Laret, president and CEO of UCSF Health. “Our expertise across the clinical and research spectrum has made UCSF the destination for complex care few others can provide. The new hospital at UCSF Helen Diller Medical Center at Parnassus Heights will provide a facility as dynamic as the health care we offer – from specialty care to services focused on the care needs of the most vulnerable in our community.”

According to Stuart Eckblad, vice president for major capital projects at UCSF, the conceptual design phase for the project will begin at the end of this year and be complete by the end of 2022. The existing Langley Porter Psychiatric Hospital will be demolished to make way for the start of construction of the new hospital in 2023. In 2028, a testing process will commence ahead of the hospital’s official opening in 2030. After that the existing Moffitt and Long facilities will undergo renovations so that the three facilities can work in conjunction as one medical campus.

“Our vision is to create a healing habitat,” said Eckblad. “This building is important to us because it will represent the future of health care. It will take the surrounding the landscape into account and incorporate the nature of Mount Sutro and the views it provides in a way that enhances patient care. We also want a design that engages the community.”

Eckblad said that the architects, general contractors and major subcontractors were chosen because of their strong track records in designing and building hospitals, and the project team is currently studying UCSF’s master plan ahead of the design-build process aimed at achieving an economical and practical result. “These firms are going to help us redefine what the future of the hospital looks like,” said Eckblad.