Lafayette Elementary Gets a Much Needed Union Facelift 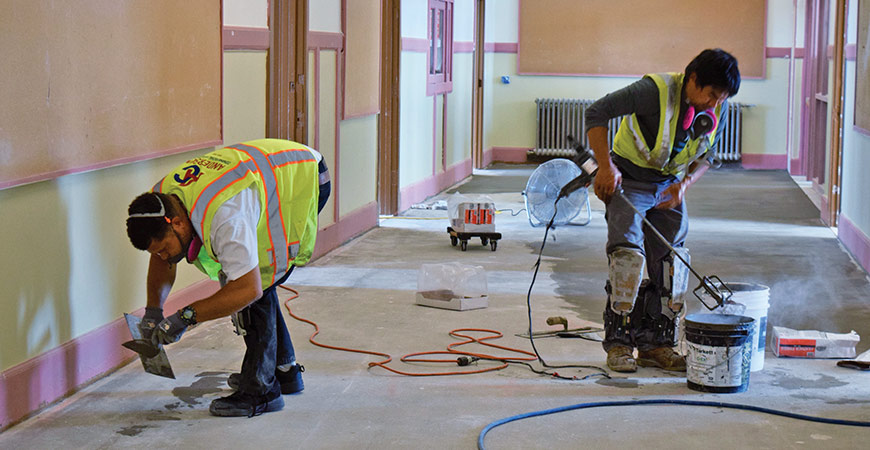 An elementary school in the Outer Richmond neighborhood is in the final stages of an all-union modernization project covering the entire facility that began in 2018. Lafayette Elementary School is one of several schools that received funding through the San Francisco Unified School District’s Bond Program which set aside nearly $745 million to address the city’s deteriorating school facilities. Voters had approved the allotted funds in 2016.

The Lafayette project will use $19.5 million to bring the school up to modern seismic safety standards as well as update the facility’s technological systems, classrooms and cafeteria space. In addition, some of the underutilized spaces will be made more usable for students and staff. The campus is made up of a main building constructed in 1923 with a connected auditorium and courtyard, but the last time any major upgrades were conducted was in 1975.The current work is being done by Cal Pacific Builders with AECOM serving as the construction manager

“This facility hasn’t been remodeled for close to 40 years and in this session of modernization we’re doing a complete regut,” said DeWitt Mark, project manager, SFUSD. “The building was very old and we’re rebuilding it into something completely modern.”

The entire basement of the school has been rebuilt to accommodate a new cafeteria, libraries and media labs. The project also involved structural work, new flooring, ceiling tiles, painting and unique LED light installations. For the courtyard, the San Francisco Public Utilities Commission granted funding for storm water management in the form of a dry creek bed for bio-retention that simultaneously serves as a play area. There will also be a green school yard where teachers can take students for gardening and environmental curriculum.

According to Angelo Racca, construction manger for AECOM, the basement had been dimly lit and separated by an underutilized storage area, so a concrete wall was taken out to create more open and brighter space.

“This project had a lot of structural work,” said Racca. “We encountered a lot of unforeseen conditions when we started excavating. We had to create new lines for plumbing. We had to re-pour a lot of extra concrete.”

The two-year project is expected to wrap up in the coming weeks once work on the courtyard is complete along with exterior painting. Jun Wang, a Journeyman who’s been with the Carpenters Local 216 for the past five years, has been working on the job for the past year. Though the Lafayette project has provided him with plenty of solid work hours, he says that it has been difficult working during the recent heat wave while wearing a protective mask due to the threat of COVID-19.

Damon Wang, general foreman, Carpenters Local 22 has been working on the project for 16 months and says the process has been “relatively easy” compared to other jobs he has worked during his 12 years with the union. “Being the general foreman, I’ve worked on all aspects of the job and it provides us with good steady work,” Wang said.

Although the COVID-19 pandemic has delayed in-person school reopening, work on the Lafayette project continued during the initial months of the shelter-in-place order. Teachers are not currently allowed in the building although tables were set up outside at the beginning of the school year to allow educators to pick up curriculum materials.

“When COVID hit, we had five or six guys who didn’t show up for a month but we were considered essential so work didn’t stop at all on this project,” said Racca. “Typically we have a lot of limitations because of school being in session, but because school was out we were able to pick up the pace.”