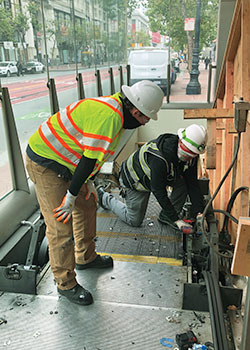 Talk to 10 different Building Trades members about their experiences with mentoring in their trade, and one will hear an eclectic collection of stories reflecting the richness of the various crafts, generational differences and changing economic realties. Yet one thing will remain a consistent thread: A robust atmosphere of mentoring on union jobsites is essential to both safety and quality of the work performed. It’s a notion that’s often been on John Christopher’s mind over the years.

Christopher joined Local 8 in the 1970s and he recalled two individuals in particular, Earl McClaskey and Dan Edberg, senior members who took him “under their wings” and taught him what it means to be an Elevator Constructor. “Those two individuals instilled a strong work ethic in me,” said Christopher. “What was so neat about Earl was that he took the time to explain to you what he was doing and why he was doing it.”

When he entered the trade at the age of 19, Christopher said that he had needed a few wake-up calls, and that’s exactly what he received during the early years of his training. “You’re an Elevator Constructor — act like one,” McClaskey would admonish him. Today, in addition to continuing his trade work full-time, Christopher is also an Apprenticeship Instructor and the founder of Foundation Twentyone, a nonprofit organization that helps guide young people into careers in the Building Trades.

David Johnson, Business Agent for the Cement Masons Local 300 had a similar experience when he entered his trade 40 years ago. He feels fortunate that as a youth just out of high school that there were people in the trade who were willing to put in the effort to shape him into a Journeyman regardless of his own level of enthusiasm. After becoming a Union representative, Johnson felt the need to give back to the trade and worked with CityBuild to design a Cement Masons program about nine years ago, which has been a source for scores of Apprentices who have joined Local 300. Yet Johnson also sees macro-level changes in the construction industry as hampering an atmosphere where mentoring can flourish on jobsites.

“There have definitely been some changes,” Johnson admitted. “You have a large majority of Journeymen out there who don’t want to be bothered with Apprentices. It’s kind of like they forgot where they came from. They’ve forgotten that they too had a first day on the job and somebody actually showed them how to do it. All of us have a day one. None of us show up as professionals in this. The most important thing is the mentorship. Some companies really get it and then there are others that don’t. Some think that having a guy on the job with no experience is a burden. But it’s actually not.”

Johnson explained that when Apprentices are given proper instruction they quickly become nearly as effective as the most seasoned Journeyman. However, the increasingly competitive nature of the construction industry with accelerated scheduling and hard bids has left less time on many jobsites for the mentoring of yesteryear.

“You have to make the mentoring happen,” emphasized Johnson. “Some contractors are good about it and some others have the mentality that we don’t have the time to do it. Everbody’s collective bargaining agreement has an Apprentice to Journeyman ratio. A lot of our contractors aren’t meeting those ratios. Instead of having ten apprentices on the job, they’ll have three.”

According to Jose Padilla, Business Manager for Roofers and Waterproofers Local 40, the Apprentice to Journeyman ratio is very important because it’s the Journeyman’s responsibility to maintain safety and pass on the necessary skills to the Apprentices. “One of the things I love to have in our working agreement is the working ratio of having one Journeyman to one Apprentice,” he said. “It’s unsafe to put just one Journeyman and five Apprentices on the job. Right now we’re able to achieve that ratio — it’s only during demolition when we have a four to one ratio.”

Mentoring isn’t confined to merely the jobsites, but extends to the training centers, union halls and beyond. Sal Rico, Local 40’s Secretary-Treasurer, became a member in 2013 and quickly evolved into a union leader because he understood that there’s no concept of personal success in roofing, “It’s like a ladder,” he said. “You climb up a ladder and look to who’s behind you. You have to make sure someone’s behind you especially when it comes time for you to retire.”

As an Apprentice taking classes, Rico recalled other classmates who appeared lost because they didn’t comprehend English well, so he decided to sit next to them and help them with the material especially when the curriculum was about safety. Rico took this spirit of inclusion along with him as he climbed his own ladder becoming a Journeyman, a member of the executive board and more recently, Secretary-Treasurer. “Going from the field to the office was hard but I told myself that I have 400 members on my shoulders and I don’t want to let everyone down,” he said. “It can be hard to find a mentor because the mentality of most of our members is just to go to work, not many aspire to be more. You have to be involved and try to make our union better.”

Rico said that one important aspect of unions is that leadership development is integrated into all the coursework and the entire structure of the organization. This sense of leadership, responsibility and mentoring others is crucial to maintaining safe work environments. John Christopher with Local 8 was recently reminded of this when he witnessed a non-union elevator constructor working alone in tennis shoes in an unlit hoist way with a flashlight hanging from mouth and a glaring absence of barricades.

“I think the biggest thing is enforcing safety,” said Christopher. “What I teach the kids is that you’re handed a handbook from the company. And that handbook gives you the protocol for the safety procedure for whatever you’re doing. I tell them to follow it — work within those limits even if the job takes longer, do it as safely and efficiently as you can. Don’t cut corners. I understand companies are push push push, but you still have a work ethic — we are Elevator Constructors, we do a job and we do as best as we can and if you can’t do something, you ask for help.”

Back when Padilla first became a Roofer 32 years ago, he too was in a position of needing to learn the secrets of the trade. After 17 years being in charge of the Apprenticeship Program, he has been able to get a broader view of the interpersonal dynamics that go on between Apprentices and Journeymen. “No one was born knowing how to do roofing,” he said. “So we all depend on finding a Journeyperson to teach you how to work. The way I see it is that it’s nice if the guy who you are mentoring gets even better than you, because that’s a reflection that you did a great job.”

Despite the challenges, the hands-on instruction provided to Building Trades Apprentices is unique in the world of the modern workplace. Peter Dailey, who began his Apprenticeship with Local 8 a year ago, had previously worked in an office as a mechanical engineer after earning a degree in that field. So far, the mentoring that he’s received on union jobsites has surpassed anything he’d ever gotten either in college or an office work environment.

“Mentoring seems very motivated by safety and the importance of getting the job done correctly,” Dailey said. “From day one everyone has always kept an eye on everyone else. There’s a lot of focus on training the next adjuster or top trouble shooter. My experience has been really positive with the Mechanics I’ve worked with and I’d recommend them to anyone.”

One effective way Johnson has found to keep the spirit of mentorship alive and well is by holding meetings with industry partners. During these meetings Local 300 representatives will sit down with associations such as United Contractors or Associated General Contractors of America and discuss topics such as ensuring the quality of the Apprenticeship program on jobsites. “It’s been very effective,” he said.

For John Christopher as well as many others in the Building Trades, the importance of mentoring is ultimately about safety. As companies continue to push for speed, he says he wants a push towards greater accountability that ensures that the work performed is done correctly the first time regardless of how long it takes, and that Apprentices are fully trained in all of the many aspects of the trade. Although he’s uncertain about changing the mentality of companies, he hopes that more retired unionists will step up to be volunteer mentors through Foundation Twentyone, and give back some of what was given to them. “Let’s do our part — our forefathers did it for us,” he said.