Building Trades Get Back to Work 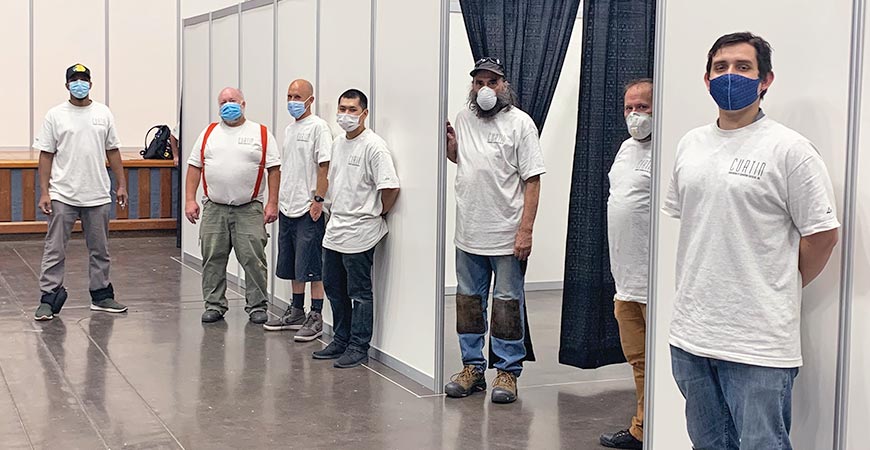 Local 510 members working on temporary homeless housing in Salinas. Work has been in short supply for the trade during the COVID-19 pandemic. - PHOTO BY JACOB BOURNE

As Local Economy Reopens, Rate of Employment Varies Among Trades

After weeks of a shelter-in-place order due to the COVID-19 pandemic that temporarily halted construction on commercial and market-rate housing projects, a new order has allowed construction activities to recommence more broadly. While the change permits members of the Building Trades to resume work on many essential projects that are underway in the city, it also comes with the stipulation that job sites follow strict safety guidelines to reduce COVID-19 transmission risk, a requirement that blends naturally with the high standard for safety protocols already followed by unions.

The San Francisco Building and Construction Trades Council will continue to hold all meetings, including Delegates and Business Rep meetings, via online resources such as Zoom for the foreseeable future.

“We’re getting back to work on the commercial end because of the changed directives, and we’re going back to safe jobs,” said Tim Paulson, San Francisco Building and Construction Trades Council Secretary-Treasurer. “Our folks know how to work safely and know how to be productive to keep the necessary work going that keeps America going.”

Despite the reopening of construction sites, Building Trades and union meetings continue to be conducted on virtual platforms such as Zoom and Microsoft Teams, with in-person meetings still halted for the foreseeable future. John Doherty, IBEW Local 6 Business Manager, described a feeling of “Zoom-fatigue” that that has come out of the abrupt shift from holding regular in-person meetings to a continuous schedule of virtual meetings.

Although the Local 6 union hall is nearly back to its original staffing level, walk-in meetings with members are still restricted, and all meetings with the Executive Board, SFBCTC, San Francisco Labor Council and City are still being held online.

Workers may be back on their respective jobsites, but the construction landscape hasn’t reverted to pre-COVID-19 conditions. Prior to the pandemic, the Sprinkler Fitters Local 483 was at an all-time record employment level. The union is back to about 70 percent of the pre-March work hours, ending the two-year trend of each month surpassing the previous month in terms of amount of work, according to Tony Rodriguez, Local 483 Business Agent.

“Some of the developers want all pre-leased agreements before they start getting a project entitled because they’re worried about how this whole thing is going to play out,” Rodriguez said. “They’re anticipating about a year before they start developing new big projects.”

Tenant improvement jobs have also been affected. A project that was originally slated for five-floors may be reduced to just one floor because of uncertainty in the market, while other projects that had been scheduled to break ground have been put on hold, said Rodriguez. Some major companies have told office employees that they can expect to continue working from home for the remainder of the year, which could also curb tenant improvement work. Rodriguez expects most unions to have positive work reports, but he also recognizes the uncertainty about the longer term health of the economy.

Doherty said that Local 6 is at about 90 percent of full employment and that the remaining ten percent represents members who either don’t feel safe going back to work yet or are still waiting for their jobsite to reopen. Challenges also remain with getting workers dispatched and registered due to in-person meeting restrictions. He said that the six feet separation policy has been maintained fairly well but there are situations where that distancing is not possible, such as when multiple workers need to handle a large piece of equipment. Daily screenings of everyone on the jobsites have also helped keep workers safe, but there’s always the risk of asymptomatic individuals who can spread the coronavirus without knowing it.

“We take safety training very seriously in the electrical industry,” Doherty added. “The Building Trades as a whole focuses on safety — the training and that expectation of safety, of looking out for your sisters and brothers in the field. The fact that that is part of our culture is what’s going to help us get through this.”

Not all Building Trades unions have fared well since the reopening of construction. Sign Display Local 510 that depends on trade shows for the bulk of its work, continues to have most of its members out of work. A few small jobs such as outdoor graphics work for a new housing development in Oakland as well as housing for homeless individuals in Salinas have provided some employment for only a handful of members.

“The bulk of our industry is still dead in the water,” said Local 510 Business Representative Morgan Worth. “Large events and large gatherings are part of [Governor] Gavin Newsom’s Phase 4 and we’re not even in Phase 3 yet.”

Worth said that some convention centers such as in San Jose and Anaheim are working on becoming certified clean venues to allow for shows to recommence. For the time being, however, Local 510 members are relying on unemployment insurance and federal pandemic assistance payments. With medical benefits set to expire in July, some may have to resort to COBRA health coverage, which has reduced rates due to the pandemic.

“There’s some concern that people could go and work for other industries, but I think that a lot of our members identify very strongly as trade show workers and installers,” Worth said. “There’s a great deal of camaraderie in our trade. I think that people will seek employment elsewhere but ultimately they will come back to trade shows once things pick back up.”

In the interim, Local 510 members will continue taking on smaller jobs such as installing social distancing graphic signs at private schools in Marin County and San Francisco as well as at tech company workplaces. Contractor Curtin Convention suggested that there could be work opportunities at a trade show in Santa Barbara in August.

On May 28, San Francisco Mayor London Breed announced a reopening plan that’s aligned with state guidelines to help certain businesses resume activity as well as allow more activities in the public sphere while continuing to control the COVID-19 spread.

“Our residents have a lot to be proud of with how we responded to this pandemic, with many people making enormous sacrifices to protect the health and safety of their fellow residents,” said Breed. “We’re entering a new phase of this crisis and we feel comfortable that we’re at a place that we can begin reopening parts of our economy, but that is not to say that this virus doesn’t continue to threaten our city.”

Similar to the State’s plan, San Francisco’s reopening will take place in four phases, which govern the reopening of a number of business and public sphere activities such as manufacturing, retail, dining and fitness centers. All construction activities had already been approved for Phases 1 and 2a. The final phase, Phase 4, covers mass gatherings and the target date has yet to be determined.